A Good Deed is a Selfish Act 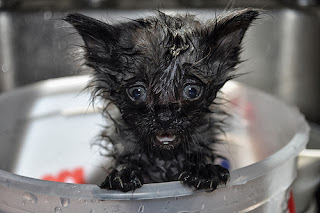 When I was quite young, I saved a kitten’s life. I can’t be sure but I reckon I would have been about eleven or twelve at the time.

I used to walk the dogs up along the wooded riverside walk we all called The Back Avenue. At the end of the walk, there was an open green area where you could sit and watch the river while the dogs splashed about in the water. It was a nice place and it’s still there. Have a look, sometime, if you’re driving past.

Anyway, this one day, I was sitting there, being all eleven-or-twelve-year-old (as you do) when there was a sudden commotion in the water. Laddie, the German Shepherd (see earlier posts) had found something in the depths and he was agitatedly tossing it around and catching it in his jaws. I called him ashore and he came, because he was trained that way. He gave up his find somewhat unwillingly.

It was a kitten. A tiny, waterlogged, bedraggled kitten. Laddie hadn’t hurt it, as far as I could tell. I laid it on the grass as I warned the dogs to stay away.

I was young but I was wise enough to the harsh ways of the world. This kitten would have been an unwanted addition to some family. Unforgivable though it is, somebody would have bundled this little creature into a coal sack with some rocks and would have thrown it into the river.

I took off my shoes and socks and had as good a wade around as I could but there was no more kittens to be found. One had escaped. Maybe there had only ever been one. An unconvinced maybe. I was, after all, wise to the world.

In retrospect, I didn’t then have a quandary but, at the time, I thought I had. My Mum and Dad would not want me to bring a stray smelly kitten home to the house. I thought there would be fallout and retribution. Heaven knows why, there never had been about anything else.

Still, I felt I had a decision to make. Leave the kitten or face some troublesome consequences.

I couldn’t leave the kitten. Who could?

I put the little thing on my shoulder and set off home. All the way, it clung to me and mewled and piddled on my coat. Eventually I got there.

This next bit is my most vivid part of this memory. When I got to the side of our house, I felt I could not bring the kitten indoors without some element of forewarning. Instead, I turned the steel lid of the dustbin upside down and put the kitten inside there. Then I put the dogs in the back garden and went into the house.

“There’s something I found…”

I took her out and showed her. Somehow, it seemed easier. The kitten had made damp-fur-art in the ash dust of the upturned lid. It was a sunny day and it looked a bit happier on the warming metal.

“Oh the poor thing! Where did you find it?”

And, after that, everything was better. In fact, I got a bit carried away after I found out that Mum was okay about me saving the kitten. Always a fan of James Herriot’s books, I now felt that that kitten had to be rushed urgently to a vet to be fully checked over. Mum didn’t agree. The cat seemed fine and vet’s bills were very expensive.

When Granny came to the house in the afternoon, as she always seemed to do, she said she knew of a woman on her street who had her eye out for a new cat, her old one having sadly passed away. Granny took the kitten home with her in her straw shopping bag. I had a bet with myself that there would be some wee in there when she got home.

Granny’s neighbour took in the kitten and (this is true) for years after I would often see the sleek cat patrolling around her adopted street, wafting in and out of a nettle patch, eyeing me curiously.

The cat survived, and had a long life. All on account of me.

The other day, I was driving along and this memory assailed me out of nowhere. I hadn’t really thought of it in years. It made me smile and it made me a lot happier than I had been before I thought of it.

That’s the point. Sometimes you do a good thing and you might think it’s a self-sacrificing, difficult, thing you have just done. But it almost never is. Every little extra good deed we do goes into a subliminal memory bank to make us feel better about ourselves. Someday, perhaps when you least expect it, the memory of one of your good deeds will pop up and remind you that you are, in fact, quite a good and valuable person.

Don’t take my word for it.

Well, bringing a cat home would never have been an issue. My mum would’ve accepted any stray animal. In fact it’s true to say she got on better with animals than humans. We brought injured birds home and they got cared for but usually died. A dog followed us home from the industrial estate once but dad saw him off. I never understood why he had to be so cruel. He never hurt it but he did chase him away. Now I’m older and know all about what happened to Butch and his vow never to have another dog I get it but all that does is make me realise how stupid vows are. My dad’s the only person I’ve known to make a vow. Everyone else makes (and breaks) promises but my dad made vows and stood by them. As for throwing kittens in a pond to drown… Just don’t get me started. I abhor that kind of cruelty.

When I was 5 or 6 the boy next door brought home a kitten that was almost drowned. His cat didn't like the intruder so we ended up with it - the cat lived to be 21 years old!