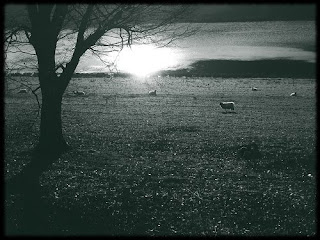 When I tried the Story Cubes for the first time a few weeks ago, a little story emerged and you were very kind about it.  Thank you for that.

(That story, as well as a more detailed explanation of exactly what I am playing at can be found here).

One thing troubled me about that exercise though.  The story that emerged was unremittingly cute and cuddly.


I wondered whether the very nature of the cubes, with their pretty little pictures, would always point me towards a sweet and shiny outcome.

When I decided to throw them again today, I resolved to give myself one additional challenge, a ‘tenth dice’ if you will.  I resolved that the story would have to be darker and less cutesy.

So I threw the dice.

My rules for myself are quite strict.  I get to throw them only once - if I don’t like the outcome that’s tough shit.  Also I don’t get to think about my options for days on end – throw the cubes and get writing.

The nine cubes are now showing me the following:  A Learner Plate, A Walking Stick, A Sheep, A Flower, An Eye, A Dice, A Tent, An Arrow, and a Speech Bubble.

(The following owes much to The Dice Man by Luke Rheinhart. )

(It also relates to this true story of mine)

I had been actively throwing the dice for a full fortnight before I realised where I had been going wrong.

Up until then, I had enthusiastically been using the dice to make my decisions for me and it had been going rather well.  I would write six options on a sheet of paper, numbered 1 to 6, and then I would throw the dice and do whatever number came up.  Just like Luke Rheinhart told me to.

My life had been completely adrift and without direction before I found the old paperback book buried in my back garden in an oilskin wrap.  It wasn’t my normal reading fare but finding ‘The Dice Man’ interred in your rhubarb patch was reason enough to at least look inside and, before long, I was engrossed.

It was no mystery how the book had got there.  When I was eleven, I contracted the Measles for the third time in my life.  This is, of course, a medical impossibility but that didn’t seem to dissuade my metabolism.
I was an avid reader even then and, after three days in bed, I had read the house dry.  My mother, anxious to satiate my need for literary stimulation, ransacked an old cupboard and came up with an even-then battered copy of ‘The Dice Man’.  It was far too adult for me but I read it anyway and rapidly tumesced my way back to health.  Afterward I was better, I couldn’t give the book back to Mum in case she read it herself and saw what I had been imbibing so I buried it in the back garden along with the book of disgusting limericks which the school had mistakenly awarded me the year before for coming second in English class.

Now, thirty-five years later, alone and bereft in the house of my youth, the book came back to me as I tried to put shape on my garden.

It spoke to me in a way no other book ever had.  As soon as I finished it, I went out and bought a heavy expensive dice in a specialist game shop and I set about putting order on my life.

For two weeks, the dice decided everything for me.  I ate, slept, washed, turned in for work, all on the basis of a throw.  I seemed to have more order and purpose than at any moment since the night when Shiv and the boys had driven away.

But something was missing.  I knew that but I couldn’t put my finger on what it was.

It was a strange sort of automatic writing incident that finally pointed out the error of my ways.  I was sitting over my sheet of paper, setting out my options for the impending Saturday night.  They included, ‘takeaway’ ‘cinema’ ‘long bath’ ‘pub’ when, suddenly, something appeared on the page after the number 6 and I swear I never wrote it at all.

It simply said, “Kill Something’.

I stared at it and shivered.  I reckoned I must be over-tired and I reached for my eraser to get rid of it.  But then I stopped.  “Why not,” I thought, “my problem is obviously that I am choosing placid options all the time, that I need to inject a bit of danger into the proceedings.  Besides, what is the worst that could happen?  If it came up, I could find a spider or a fly or a worm for Christ’s sake.  Something to kill would not be a major problem.”

So I left it on there as option 6 then I went away and got myself a can of diet coke from the fridge.

When I came back, I threw the dice.  It came up with option four, which was ‘take a long bath’.  But I didn’t fancy that option too much so I took the liberty of throwing the dice again.  This time the number six came up.
You know what that said… except somehow the word ‘Big’ had now got added on to the end of the instruction.
I really have no idea how.

The country laneway was dark and deserted as only a three a.m. July laneway can be.  I was wrapped up against the drizzle and the gloom and I wished with all my heart I had stuck with Option 4 but either I was going to honour this deal or I was going to fall back into my wayward and self destructive ways.

I came to a steel gate which hung askance on a piece of rope and I heard the noises and saw the fleeting grey shifts in perception that told me I had climbed the hill far enough.  I climbed over the gate and went into the field.  I had a bunch of ragged petrol station forecourt flowers with me, like the most pathetic suitor in the world.  I now offered then forward into the darkness, clucking gently.  With my other hand, I brandished my blackthorn walking stick and waited for something to emerge from the darkness.

Soon enough, the sheep wandered over.  If there are only been one, I would have brained the witless beast and been on my way but that’s the thing with sheep, isn’t it?  They so rarely arrive alone.  In face they came in a drove, appropriately enough, and seemed more interested in me than in my primroses.  Flowers like mine were alien to them, I suppose, but a human was normal and often came bearing hay.

They milled around me and brushed their shitty wool sides against me and I lost patience and lashed out, catching one squarely across the back.  His mates dispersed then, into the dark but the one I had hit was flattened momentarily and disorientated.  I raised my stick and creased in its head with a single blow.  The beast scrambled about and kicked my shins furiously.  I swore and hit it again and again and once again.  I could see in the gloom that one of its eyes had fallen out of its socket but even that didn’t cause me to stop.  The beast lay still now but I continued to pulp its head with my stick.

Somebody had come, out of the depths of the field.  As he came towards me I could see something of him through the slack-jawed shock of his face.  He was too clean and too thin to be from this locality and, even now, over his shoulder I thought I could detect the unnatural billow of his tent.  How unlucky was that?  To choose the field with the camper in it.

He was up close to me now and his face darted from me to the mess on the grass and back again.

“What have you done?” he said again and his accent was mid European for sure.

He looked at me more closely then and this time he did not look away.  I watched carefully as he detected in me something that I was only just beginning to detect in myself.  The shock and outrage on his face fell rapidly into something more pitiful, something more defensive, something entirely more justified.

I didn’t speak to him.  It would have just been throwing words into the void, wouldn’t it?

Instead I raised my stick high once again and made a mental note that, next time, when it came to the number six, I would write down something a little less messy.
Posted by Ken Armstrong at 19:29:00

When you first said Dice Man I thought you meant the controversial comedian Andrew Dice Clay. That had me worried from the off. Needn’t have worried, eh? No one was going to be offended by this little ditty apart from maybe sheep and sheep farmers. Nicely done, son.