What Did You Do on the Weekend? 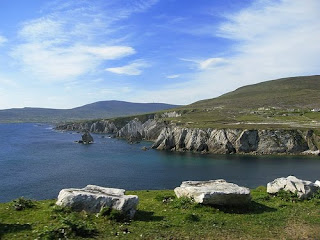 Well, funny you should ask…
Two weekends ago, a friend of mine, Simon Ricketts, called, a bit out of the blue, and said he was passing through Mayo and could we perhaps meet up for a while?  He was over from England, touring the country for ten days or so and Castlebar was on his route.  So, hell yeah, I could meet up.

We took the day and we spinned around my (adopted) home county of Mayo in my car.

Before he arrived, I was in a bit of a quandary.  What do you show visitors in Mayo?  I don’t do an awful lot of this kind of thing.  I knew Simon would be happy with a meet up and a coffee and a bit-of-a-chat but I wanted to show him around a little and I wanted to hang onto him for longer than an hour while he was here, cause he’s a really sound chap.

But what do you show people in Mayo?

I learned a couple of things on our journey through Mayo a few Saturdays ago.  I learned that seeing a place is not necessarily about going to a particular monument or vista, it’s not about ‘taking something in’.  It’s much more about simply being in the place, moving through it, nosing around it, smelling and hearing it too.

We drove around for hours on end.   We stood on deserted beaches and under cloudy mountains, we sipped a drink in a roadside hostelry, watch kids dipping in a drizzly evening harbour, heard some music in a crowded friendly pub and had a late pint in a sociable corner.

We didn’t see anything that would qualify as a show-stopper or a big event.  We just took a little time and had a good old nose-around and, you know what? It was bloody great.

So that’s the first thing I learned: don’t just see the high-spots, try to ‘be’ in a place.

The second thing I learned relates to how very lucky I am to live in a place like this.

We’re like rabbits, aren’t we?  We cut a track in the grass between our burrow and the places we go out into, to eat and to shit.  We often don’t deviate much from those tracks.  But to do it – to stray off the beaten track, even if for only a day – can open your eyes to where you are.  It did for me anyway.

For instance, we drove down the ‘Atlantic Drive’ towards and then onto Achill Island.  My God, what a wonderful road!  Edging along the ocean, dotted with fearless defiant sheep. It is a high road, a slender road and, by God, an isolated one.  I’d been there before but I was going somewhere else, I wasn’t there just for the sake of it.  To do that... it was an eye opener for me.

Even to be in the pub, with the music playing, and to look around and see all the people having a good time and knowing I’d usually be dozing in the recliner by now.  There’s a life to be lived just outside of our rabbit runs and it’s in your place just as much as it is in mine.

So thanks, Simon, for coming by.  I kind-of alluded to it on the day - and I know it sounds odd - but there’s a genuine feeling that, by coming to my country and driving and eating and drinking and chatting and… just… seeing… well, you honoured us.  Yeah, yeah, I know it sounds stupid but I did feel something like that.  You were enjoying yourself so well that you were doing us proud.
So thanks mate, come again soon, eh?


FOOTNOTE:  Simon kindly provided me with this link to some of the live music we heard in Matt Molloys in Westport on the Saturday evening.  It's here.
Posted by Ken Armstrong at 13:43:00

I am biased, of course, but I loved to read this. Too often, we can all forget to 'smell the roses' in our lives - and we can all be guilty of taking our luck for granted. I know I have at times.

I was in the enviable position of having time and space to explore Ireland. Every time, instead of going down the main road, I always took the more winding, the less direct route.

And, by crikey, Ireland has some fabulous places to wander around.

I am glad, Ken, that it helped you smell the roses in that fantastic patch of earth you are lucky to live on. I enjoyed our day immensely - great laughs and a wonderful glimpse into life in Mayo.

And here, just for atmosphere, is a little snippet of the fabulous music we heard in the pub.

I'll be back soon, Ken. Keep the Guinness cold and the rain warm.

My wife’s son came over for a visit what in my head was last year but was more than likely two or even three years ago (for some reason I can’t think of him as my stepson considering he’s only ten years younger than me) and as Carrie wasn’t really up to daily outings I was tasked with showing him Glasgow. It was an interesting exercise. What I learned was that Glasgow = shopping. If I’m not going to buy something or look for something to buy then the place isn’t actually of that much interest to me which is why I never go near it any more. But you’re right, it’s amazing how much we can miss what’s right in front of our face. I’ve been visiting Kelvingrove Galleries since I was a tot – it was a cheap day out – and yet I was in my forties before I realised there was a ruddy great park sitting right next to the place. I mean it’s just a park – a park’s pretty much a park in my book – but there you go. I this regard I owe my sister a debt of gratitude. When we were both single she used to come over to my flat, we’d get in the car and she’s say, “Let’s go that way,” and off we would head to see what we could find. We never found anything that exciting but we might have.

I love the part about rabbits.

I really am like that. I want to leave the hutch, but sometimes it feels like I am the hutch.

Super post. And it must be said, we do have a lovely county.

A very interesting read. I always find your reads interesting. I'm like that with the town I come from. After walking around a bit you find out what a special place it really is.

Mayo's fantastic country, but it sounds like a drive with a friend is all that counts -- what a great way to spend a weekend afternoon!

I spent mine painting my baby girl's room purple, then regretting how puuuuurple it is. Oh well, she likes it a lot, and that's all that counts.

(Stop by and see it sometime?)

There is no place like home! We are fortunate to live on the most beautiful island and are all guilty of sometimes not seeing the forest through the trees.