Flag Day Brings Out the Chameleon in Me 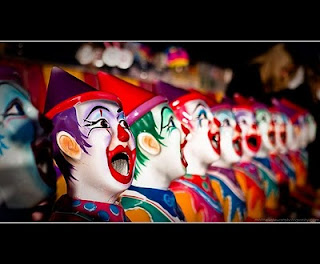 “There’s a whole lot of people don’t seem to understand that you have to talk to a man in his own language before he’ll take you seriously.”

(Coker – The Day of The Triffids by John Wyndham)

A word of explanation to start.

In Ireland, a ‘Flag Day’ is when you go out onto the streets and collect money for a particular charity or club.  The little sticker you get for your lapel after contributing is called a Flag.   Okay?


I have a particular trait which I think most people possess a little bit of.  It’s just that I seem to possess an awful lot of it  It’s not a conscious thing by any means but I am a naturally self-aware person so I often catch myself doing it and then I actually hate myself for doing it.

I know we all do this to some extent.  I even said it earlier (read back).  Maybe I don’t even do it any more than others but I think I do and that’s enough to annoy me.  Why can’t I just be myself with everybody and let them take me or leave me as they choose?

I remember finding the character of Coker in the novel ‘The Day of the Triffids’ and immediately identifying with him for his trait of changing his manner of speaking depending on who he was addressing.  It’s the closest I’ve come to finding myself in a fictional character.

This habit of mine is bad but it gets infinitely worse whenever Flag Day comes around.

Every year, I stand outside my local Supermarket and ask people to help towards the upkeep of our local tennis club.  It’s there that this ‘Coker’ quality of mine reaches manic and exhausting proportions.

Standing in the lobby of the store, I see whoever is coming towards me and, in order to extract a little funding – or at least not get beat up – I give each one a little of what I reckon they might want.  I look sad for the old ladies, pissed-off for the guys, funny for the kids, businesslike for the shop-manager, friendly for the emigrants, small for the police, big for the pretty gals…

It’s completely and utterly bloody exhausting.  I would imagine if a security camera caught me, it would present a bewildering array of attitudes, stances, facial expressions and movements.

Of course, I’m not like that all the time in real life.  Mostly it’s very subtle and I doubt many would even notice it.  But, like the title says, flag day and its peculiar requirements brings it out in me.

Confounding all this disgraceful emphatic posturing is the manner in how I deal with people who might challenge or attack me in any way.  I cannot bear to be messed with, disrespected, or maligned.  Those people – and there are always a few on Flag Day – may be surprised at the passion and vehemence of my response to them.  That, perhaps, is when I am closest to being that elusive character – the ‘real me’.

So perhaps I wish I could be the ‘real me’ a little more often.  But who is the real me?  The ‘me’ who exists when no one else is around is a rather silent and deflated sort of a fellow.  Not someone you’d jump to spend much time with.

I sometimes think the best description of me would be as a sort of a mirror – when nobody’s in front of me, there’s not all that much going on…

Perhaps the ‘real me’ really is this hybrid mimicking fool who alters himself to suit whatever background he currently occupies.  Perhaps I should just accept that fact and move on.

What do you think?

Whatever you say, I’ll probably agree.

I’m not sure there’s such a thing. It’s the old, if-a-tree-falls-in-the-forest-and-there-s-no-one-to-hear-it-does-it-make-a-sound scenario. We are social animals, we like being around other people (even a grump like me) and we respond to those people. Some people are better equipped to bring out the side of ourselves we like to see but that the other crass or vulgar side is there to is obvious when you get in with a different crowd. It’s why we talk about a character having many sides. To take your example, what would you be like in the pub with a little old lady sat beside you and your mates? Would you mind your P’s and Q’s? Or would you be swayed by numbers? It’s a matter of appearances. And things are not always as they appear. I think we can get ourselves tied on knots thinking about the meaning of life or who is the real me as if there is one simple answer. The real answer is: It depends.

This sounds like parenthood to me. Wife-hood, and parent-hood. The sudden fracturing of personality as you try and please different sets of people, and then wake up one morning wondering quite where you have gone to.

Have you ever read "The Martian Chronicles" by Ray Bradbury? There is a story in that collection called simply 'The Martian' and it is about how one of the last surviving indigenous creatures on Mars takes on a different form depending upon who is looking at him, and who they are thinking about. So everyone who sees the Martian, sees someone that they have lost, or left behind, or who is missing.

It's a wonderful tale. But I often think I know how that last Martian must have felt. We all wear different faces depending on where we are - at work, in Tescos (!!), in the doctor's office, even on the internet.

Sounds to me as if you're being a bit hard on yourself. So you're adaptable and easy-going. You deal with people on their level. They're good traits to have, aren't they? As for the unexciting person you feel you are when you're alone - so what? You only have to please you when you're alone. If you're content with who you are by yourself, that's all that counts.
I think people who say, 'this is me and you can like it or lump it' are often very hard to get on with (unless, of course, they're saints in the making), and I tend to avoid them as much as possible.

Personally I find spending time with lots of people exhausting, because I feel 'on' or that I have to change myself to best suit the situation or company.

The people you are most comfortable with are the ones where you can most be the person you are naturally, your default setting.

This is totally me. Don't know whether it's having moved around so much as a kid and also as an adult, no roots, see, gotta put on a show. Also brings out the insecurity sometimes. And nowadays, maybe life experience, but this firey whirlwind doesn't like to challenge people like I'd be proud to do in the past. Mostly I put this chameleon nature down to my living abroad.

Yeah, I do that too. I'll take it a step further...I even start to talk like the other people. For example, I was working in a store in Virginia over the weekend--resetting the store. I instantly put on my southern accent even though I've lived my whole life in the Northeast United States.