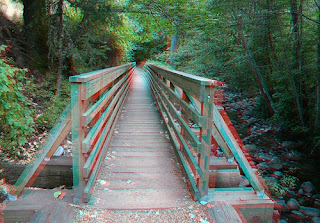 Ever since I’ve been around the Internet, whenever Grand National Day arrives, I usually say pretty-much the same thing on some forum or another.  This year it was Twitter.

I usually say, “If you’re bored watching the Grand National on telly, put your sunglasses over one eye and it will be in 3D.”

The reaction to this little nugget of information is invariably the same.  People take a ‘Yeah, sure… pull the other one” approach and I suppose I can’t really blame them.

This year, as I sat with my sunglasses watching the race in 3D, I was longing for someone to try it out and come back and confirm that I was neither a raving lunatic nor an inveterate prankster.  Of, course, as we know, I am both.  But not in this instance.  This really works.

But nobody would try it.

Of course it doesn’t work for just the Grand National – that would be silly – it will work for practically any horse race or anywhere else on telly where people or things run around a track. If the action is moving from right to left on the TV, put the sunglasses over your right eye and/or vice versa.

Why doesn’t anyone believe me?

It’s a widely known effect but I like to think I put the spin on it of using it to watch horse racing.  I’m probably wrong, it’s a big old world, somebody else probably did it first.

Here’s a little of the science.  We’re talking about something called ‘The Pulfrich Effect’ which refers to lateral motion of an object in the field of view being interpreted by the visual cortex as having a depth component, due to a relative difference in signal timings between the two eyes.

In simpler terms, if you delay the light coming into one eye – by the use of, let’s say, sunglasses – then the object can appear to have some depth.


“But if this is the case”, you cry (I know you don’t really), “why don’t all 3D glasses just have one eye darker than the other?”

The problem lies in the phrase ‘Lateral Motion’.  You see the depth perception trick only works while the object is in motion. When it stops, the effect stops too.  So, unless Avatar was going to be a constantly whirling extravaganza, this technology would not work for it.

But it does work for horse races…

But none of you are ever going to try it out, are you?  It sounds pointless and stupid and, in truth, that’s exactly what it is.  It’s rather a weak effect and it gets tiresome awfully quickly but my refrain is, it does work and nobody will believe me.

So maybe you’ll have a look at this…

The BBC tried to use this Pulfrich Effect in their 1993 Children in Need programming.  They even produced a dreadful Dr Who short, touting it as a 3D episode, they even issued glasses, which were just one lens darker than the other, as described above.

And here it is.

Humour me.  Cover your right eye with your sunglasses, sit a little back and give yourself a minute or two to become accustomed to the effect.

I don’t expect a plethora of in depth comments on this dodgy post.  I just wanted to explain my annual announcement.  Maybe, though, someone could just confirm that it works.

And if you want to move on to a televised horse race, please, be my guest.

This works. Unfortunately I am scared of seafood and creepy crawlies and will now have nightmares but am eagerly awaiting next big horse race on TV to try technique out again!

I couldn't find my sunglasses but have just wasted about 45 mins trawling though YouTube's Doctor Who videos including one with George (Doctor in the House) Layton as the Doctor. Should we be grateful or sad that never happened?

Saw Tom Baker interviewed on SkyArts last night. Damn he gives a good interview. Did you know he spent six years in a monastery? Hard to believe. He managed to pull off being full of himself but at the same time well aware of his own limitations at the same time. I was thoroughly entertained.

I believe you Ken! Next horse race and I'll give it a whirl. My family already thinks I'm crazy so what do I have to lose?

I remember you saying that... unfortunately I was unable to try it out being an ocean away from what you were watching and not owning a pair of sunglasses. *goes and buys some sunglasses*

Great, something else to add to my "To Do" list...cause you know how curious I am. :)

This'll keep me occupied for days, I can tell.

Jim: Dr Who is never a waste. I wonder how the new man is agreeing with you?

Reese: There's a pun somewhere in give it a whirl

Lozzie Cap: I don't think it will, really.

I think he’s doing a stellar job. I’m actually one of those who sees the good in all the Doctors. I think the scripts have been full of holes but as long as you don’t get into a state about that it’s been a great start to the new season. Love the redesign on the Daleks. And I have to say Ms. Pond is very pleasing on the eye plus the Scottish accent is delightful.

Oohhhh! I think the Kentucky Derby is this weekend. I will validate your experiment! I may even have a mint julip in your honor....although I'd rather just have a mojito. There's mint in those so it should count!

I've just found this following a 2 hour argument in the office where people basically called me loopy. I even went on about the BBC thing and people were just making whirly-finger-he's-gone-mad gestures in the background.

So thank you for at least joining me in the tiny circle of madmen (and using the right name for it, which I couldn't remember!)

Carps: You're welcome, I knew this would be useful to somebody someday... well, actually, I didn't. :)