A Shallow Grave for The Dice Man 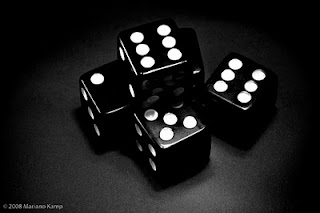 My youngest son, Sam, has just given up wanting to be read-to in bed at night.  He is Nine.  Suddenly, he only wants to snuggle up under the quilt and read himself to sleep.

As a matter of interest, the book that grabbed him and made him want to do this is called ‘The Name of This Book is Secret’ by Pseudonymous Bosch – which is possibly not the writer’s real name. I don’t know anything else about it, sorry.

Thus ends my ten-year stint of reading every night to our two children.  It’s something I have enjoyed enormously and would recommend wholeheartedly.  Along the way I have read aloud ‘The Lord of the Rings’, The Hobbit’ all of the ‘Harry Potters’, ‘Watership Down’, ‘Winnie The Pooh’ (which is wonderful to read aloud) and many many others.  Just a few pages a night, every night. It's stunning how much ground gets covered.

As we peeped in the other night at Sam reading his own substantial book, Trish remarked that this was a gift I had given both of our kids.  If that’s true, I’m very pleased.  I myself have adored reading for a very long time.

And I started so very very young.

Well, not so much 'reading' as 'reading adult books'.

My parents were very protective of what I was allowed to watch on television but they never seemed to realise that books could be so much more vibrant, descriptive and damned informative  than TV could ever hope to be.  I quickly got bored with ‘Famous Fives and such and so, when I began to dig around in the adult section of the library, nobody seemed to mind.

I arrived in post-primary school, aged eleven, and the English teacher asked what was the last book we had read, she was a bit taken aback when I told her it was ‘Papillon’.  She took it on board though and slipped me a copy of John McGahern’s ‘The Dark’ while the others were catching up with Dear Enid.  That teacher, Patricia O’Higgins, was a huge influence in my pursuing my writing in the way that I have.  I should really thank her for it somewhere other than here.

Was it a co-incidence then that, at the end of first year in that school, I was given a book prize for coming second in the class?  (I nearly always come second in things).  The book was the rudest book I have ever owned.  It was called ‘A Little Treasury of Limericks Fair and Foul’ and whoever picked it out for me could not have misunderstood the level of content within because it was copiously illustrated.  That book met the same fate as The Dice Man, which I will come to in a minute, but not before I practically memorised it.  I still get laughs from recounting the verse therein from time to time.

At some stage, I got some kind of cold or flu and I demanded that Mum go and get me a book to tide me over.  The book I wanted helps me date that sickness quite accurately.  I wanted a copy of Spike Milligan’s latest war memoirs which were called “Rommel?” “Gunner Who?” and which was brand new out.  That came out in 1974 so I was eleven at the time.

I got the book.  It was funny but didn’t last long.  I needed something else to read.  Mum dug in a cupboard and came out with a thick battered paperback – ‘The Dice Man’ by Luke Rhinehart.  I don’t know how this book came to be in that cupboard.  Nobody in our house had ever read that book, that’s for sure.  If Mum had only read the blurb on the back, she would never have given it to me.  That blurb on the back was so misogynistic and sexually explicit that I would even not be comfortable reproducing the text here although I remember it word-for-word.

So there was me, in my sick bed, aged eleven, reading The Dice Man and quite enjoying it.  It was rude and wrong and overly-educational but I soaked it up and moved on.

The big problem was what to do with it after I was finished with it and feeling better.  Should I have handed it back to Mum, say, “Thanks, that was great.”

In the end, I wrapped the book in a plastic bag, took a spade, and buried the little package in the back garden, behind the old shed.  The limerick book went there too some time after.  Thankfully, that marked the end of my book-burying career.

So maybe I have given my kids the gift of reading – I hope so.  What I won’t be giving them any time soon is the gift of adult reading.

They’ll probably be a little behind me in that respect.

I can live with that.

Ha! The thing is, you never really know what your kids are reading!
Great that they read at all....I was very sad when my son, having til then been a voracious reader, just STOPPED aged around 15. Now, he tells me that reading is 'work' (he is at university) not recreation.....sigh....

When I was 12 I started reading my brother's James Herbert books. Full of horror, suspense, sex and enough to get my parents on some sort of register had anyone found out. She was cool with it. My friends' parents weren't. I wasn't allowed to let them read them. I then sneaked a look at mum's murder monthly magazines with graphic pics of murder victims and info. on investigations. It didn't gross me out or scare me; I was fascinated. Point is, might let the odd Rats book slip through the net but there's no WAY my daughter will be reading those murder mags.

Since neither of my parents read – yes, they could read – there were never any questionable books lying around for me to chance upon. I can recall my dad reading me from one of the various Enid Blyton books that they tended to buy for me - Brer Rabbit was a favourite and I made sure my own daughter had all three books before she was even born. She is a voracious reader but then so was her mother. Me, not so much, but I encouraged and supported and that’s the main thing. Since her mother and I broke up when she was two most nights it was not me who put her to bed and so I was deprived of that task, something that irks me to this day. I did write a children’s book for her just after she was born but she was seventeen before I sat down and read it to her, a chapter a night, until it was done. That I remember with fondness.

Winnie the Pooh is one of the best read-aloud books ever written. Also, I find it wonderful that the following sentence is grammatically correct:

In after-years he liked to think that he had been in Very Great Danger during the Terrible Flood, but the only danger he had really been in was the last half-hour of his imprisonment, when Owl, who had just flown up, sat on a branch of his tree to comfort him, and told him a very long story about an aunt who had once laid a seagull's egg by mistake, and the story went on and on, rather like this sentence, until Piglet who was listening out of his window without much hope, went to sleep quietly and naturally, slipping slowly out of the window towards the water until he was only hanging on by his toes, at which moment, luckily, a sudden loud squawk from Owl, which was really part of the story, being what his aunt said, woke the Piglet up and just gave him time to jerk himself back into safety and say, "How interesting, and did she?" when — well, you can imagine his joy when at last he saw the good ship, Brain of Pooh (Captain, C. Robin; 1st Mate, P. Bear) coming over the sea to rescue him...

Justmeagain: I take the point but I think I really do know what they're reading... and gameplaying and interneting - I'm a big kid myself so they can't fool me. :)

Missesgandt: James Herbert did good stuff back then. My Dad read those murder mags - True Detective and such, they're still around I think. So many murders to cover...

Jim: How proud she must have been. Fair play to ye - one cool Dad, I'd say.

Vange: I *so* agree with you. Thanks. My favorite was Eeyore - so different in the books from in the films, quite sarcastic - a bit like A*adia. :)

George!! Such a treat to see you there. I was actually thinking about our Compadre MK today, would you believe? Hope all is well with you sir.

In fact, I remember Mr Benson very well indeed but I'm not wrong on this. You see, we had Mrs O'H for French in first year and it was there and then that she gave us all those books to read... English books. She gave us a poem about blackberries too and slapped Sean Monaghan in the bollocks - but those tales are best left for another day. :)

What a fantastic story, Do you still have access to that garden? Do you think you could remember the spot to go and dig it up?
not for your kids to read obviously...

This fascinated me, you mean you "buried" the book? lol...I was also introduced to reading at a very early age. When my peers are still on Mills and Boon , I was already reading Louis L Amour, Barbara Cartland and Ian Fleming. That is so sweet, reading to your kids. You've developed their love for reading and that is admirable with kids now more focused on the computer and the Internet.

I hope I'll be able to send your book soon. I ran out of copies and I was not able to re print it immediately, so the delay. Take care. God bless.

This was great! I can so relate...

I grew up with a VERY strict Catholic father. Some of the shows we were not allowed to watch because they were too "racy": Sonny and Cher, The Love Boat, and Starsky and Hutch. I learned the hard way not to leave my library books lying around in the living room when he made me return a coming-of-age book about two gay teens. I did as he asked and returned it - and then checked it out again and hid it under my mattress. My poor dad was trying to protect us - what he failed to realize was that sheltering us didn't make us safer, it made us naive. If he's only said, instead, "These are not our values, but it's important that you know this stuff goes on in the world..."

I love reading to my little girl, and I'm sure I'll enjoy reading to my boy when he's old enough. I guess I'll miss it too, the way you do.
And you're right, Winnie the Pooh comes alive when read aloud.

I so could not read Watership Down to the children - all the crying would upset them. *sniff*