The Biggest Movie of My Life 2 - Cross Country Viewing 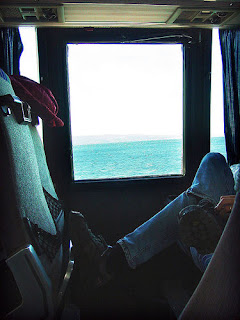 (This is a companion-piece to the first post I did on Jaws some time ago.  You can see that here.)

In the book, ‘Fever Pitch’, Nick Hornby tells how key moments in his life have been defined by soccer matches he had seen.

It’s much the same for me with films.  I have very precise memories of almost every film I have seen – which cinema, who was with me, events that happened on that day.

How odd then that, after such enormous anticipation, I remember so very little about the first time that I ever saw ‘Jaws’.  Almost anything I might say about that first viewing would be largely imagined or made-up because I really don’t remember.


However, I remember loads about the second time I saw it.  It was exactly one week after the first time I saw it.  I was going again with my friend and his sister, neither of whom had seen it yet.

My mother was annoyed that I was spending good money to see the same film twice, she thought it was a bad idea.  But I went anyway – this is as close to rebellion as I ever came.  I since found out that my Dad went to see ‘The African Queen’ on seven consecutive nights in the local cinema so maybe Mum didn’t mind me going quite as much as I thought she did.

In that second viewing, I actually felt that I owned the film.  It was mine now and I was showing it off proudly to my friends.  ‘Look what I did just there, aren’t I great?’

This second time around, I was able to look around and watch the astonishing audience reaction when Ben Gardner slipped out of that hole in the boat.  It was the oddest thing – everybody jumped.  And I really mean jumped, they didn’t cower under their loved ones elbow or throw their hands up to their faces to hide.  They jumped and screamed in complete unison… and then they laughed in relief.

One thing I do remember about my first viewing is that I didn’t jump.

I think I might have been the only one.

In September 1980, Jaws turned up on television in Ireland for the very first time.

It might be hard to believe now, but this was a bit of an event too.  VCRs were only just starting to tentatively appear in the more well-off homes and the concept of the video as home entertainment was still a few years away from being cemented.  As a result, the film had dropped from view after a long cinema run and had not been seen much for nearly five years.  The prospect, therefore, of reliving the experience in your own living room was an interesting and, yes, an exciting one.

This Sunday night TV premiere spawned one of the most lasting and emotional memories of ‘Jaws’ for me.  Perhaps it goes some way to explain why that silly old film still means so much to me.

You see, Sunday night was no good for me.  I couldn’t get to see it.  On Sunday night, at Six O’clock, I got the bus back to college in Dublin.  I had just turned seventeen, was only two weeks into College and Dublin, had never been away from home before, and was physically and desperately homesick.  I didn’t want to be in Dublin, I wanted to be in my own house watching the film, just like everyone else would be.

But I had to go and so I didn’t get to see the film that night.

I watched the film through every living room window I passed, from eight o’clock to ten, as my bus rolled across the country.  My eyes riveted to the bus window, I saw snapshot after snapshot of ‘Jaws’ beam out to me.  There was lots of houses, lots of windows and everyone was watching.
I know, I saw them.

And the abiding memory of that snatched cross-country viewing?  Easy.  The colour blue.  The azure sea…  I can’t explain it but it tugs at me to write it even now.

That blue became a link to home.

Hey, me too! I saw it twice and I *still* love it. Brought my younger sister the second time and jumped out of my skin when the guy popped out of the boat. Not just the first time, but both times.

It's an amazing film. The whole concept of a "Knight vs a Dragon" is pretty powerful, and if you wanted a knight in the US you'd pick a New York cop who'd seen it all. Add Hooper for intelligence and Quint for experience and you have a great team.

That scene on the boat where Quint tells them of his shark "experience" is still seriously powerful all these years later.

I feel privileged to have already heard this story! Cool post ken.

I love the visual of that...as if you were on a ship yourself, bobbing in the sea, catching glimpses of the great shark.

You do know how to tell a story, friend!

I also remember Jaws fondly. It was the second film I took my first real girlfriend to see, the first being Tommy. (I have no idea what the third one was.) My brother, who was underage, got into see it later and was nearly thrown out for laughing through it. People talk about the soundtracks to their lives and I’m sure we could both think of one but I can also picture a trail of films going back to The Legend of Lobo (which I always think of as Lobo, the Lonely Wolf for some reason), the first film my dad ever took me too and during which I howled – with tears, not pretending to be a wolf. I remember thinking this was such a cruel thing to put a kid through although I’m probably grafting that thought on as we do.

Am I the only person in the world never to have seen 'Jaws'?

Hi Der: Yes, you and I have discussed that scene over pints in corners of darkened Galway hostelries. John Milius had a hand in it, they say, as did Robert Shaw.

Donnie Darko: (Where *did* he get that name?) :) Don't be honoured, you're my pal and will doubtless get a preview of more silly stories as they arise.

Hope: Thanks. I like telling little stories, it's gratifying if they give enjoyment.

Jim: We used to go to all the tear jerker movies as kids and howl with laughter all the way through them. There was one popular one called 'The Last Snows of Spring' and my behavior was utterly disgraceful. :)

It goes to my theory that we need experience before we can truly feel emphatic pain. It wasn't until after I put my fist through a window that I started to wince when a movie character ever did the same.

Kate: I am sure you are not. But I recommend you do sometime, it's a good flick. :)

I obviously missed this the first time you posted it...

Was lucky to go to Nantucket Island and see the beach where Jaws was filmed. Breathtaking. Fabulous day as a group of us cycled round the island. More happy memories.