“So, tell it to me again. He was on ‘Twatter’ when he was murdered?”

I looked around the room admiringly. The guy was obviously a bit of a movie buff, judging by the original posters he had framed on the walls. Good seventies stuff, all very neatly done. In contrast, the study desk was all a bit of a bloody mess.  The keyboard was glued now with thick black blood and the screen was spattered with tiny bulbous droplets of the stuff. Some of them had run down a little before the heat of the screen had boiled them solid.  Not many though.

I peered through the droplets at the web page on display.

“Was that his name?  Armstrong?”

“His name, son, you can bake me the cake later.” I enjoy being a bastard at murder scenes. It helps keep the minions focused.

“You seem to know a lot about this twat thing.”

I looked young Nash square in the eye. Never look in two eyes, concentrate on just one. That’s the secret to winning a staring match.

Nash looked at me as if I was mad. There was perhaps hope for the lad yet. I was yanking his chain and he knew it. The hilt of a bloody-great dagger was sticking out of Armstrong’s throat, there wasn’t much question about what it had done…

I shook myself. I’d been staring and thinking about that knife and how it might have felt going into my own carotid artery and that wasn’t the way forward.

“Who have you got in the other room?” I asked Nash.

“Three men. There was a poker game. They took a break apparently, Armstrong came in here for a tweet, one went to the toilet, one went into the garden for a ciggie and one stayed in the room.”

“And you think one of them killed him.”  I said.

I sighed again. TV detective programmes were a curse on many levels. Not least because practically every second young cop now thought every domestic was a clue-ridden mystery to be pondered. In fact, usually they were just a bloody mess with a whimpering fool sitting on the periphery, waiting to cough it all up.

“Who are they, these three?”

“As far as I can gather they’re an old school friend, his doctor and his brother-in-law. The in-law is a pain, says he works nights and has to phone in, we’re keeping him from that at the moment.”

“Well, it’s a classic locked door thing, sir. One of them did it, there was nobody else. Plus there’s something else.”  Nash looked embarrassed.

“Spit it out lad, what else is there?”

“A ‘clue’ sir.” Nash said it as if it were rather a dirty thing.

Nash showed me the screen.

I walked over to Nash. I was a good foot shorter than him but that hardly mattered.

“You think he twatted us a clue from the grave, don’t you?”

I was about to berate him for the penny-dreadful-consuming fool that he undoubtedly was when I stopped. Maybe, just maybe, he was right. There hadn’t been a real ‘clue’ case since the ‘Smirnoff Affair’ and that was a few years back. Maybe I was due another. I leaned in and read Armstrong’s Last Tweet. 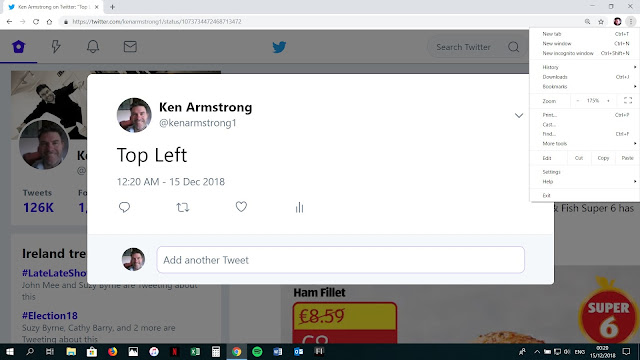 “Buggered if I know sir,” said Nash, who then blushed furiously, “Sorry sir.”

In fairness, it did at least seem possible that Armstrong had looked up from his desk and seen someone come in with a whopping great knife in his hand. He might have had a moment to twat off a message with a clue in it.

“But why wouldn’t he just twat the name or the initial or something,” I asked, “ why type ‘Top Left’?”

“Because if he wrote the name, the killer could have seen it and deleted it. He had to be obtuse.”

“Obtuse, Nash?  What are you reading?”

I looked at the twat thing again… harder. Forensics will catch this killer, or he’ll cave under a moderate Q and A, we didn’t have to do this Sherlock Holmes shit on it…

But it was fun and when it worked, it was bloody awesome.

But it wasn’t a bloody anagram. There was no time for bloody anagrams, not with a killer bearing down on you with a massive bloody knife.

I looked again.  Top Left.  Top Left of what? There was nothing to be Top Left’ of…

Except there was, wasn’t there? This twit twat thing wasn’t just a few words, it was a picture too. And we all know what a picture can be worth.

I tried to keep my voice level.

“On every street,” I quoted, “in every city, there’s a nobody who dreams of being a somebody.”

Nash looked nervous. “I don’t understand you sir.” He said.

“Never mind,” I clapped my hands together, “Let’s see the suspects, Nash, one by one, just like your bloody Morse would.”

“What order do you want to see them in?” asked Nash.

“That brother-in-law, the one who works nights, what did you say he does for a living?” I asked, nonchalantly, holding my breath.

I let my breath out, smiled.

I endured three hours of The Da Vinci Code last night. You don't write under then pen name 'Dan Brown' do you?

And well I'm feeling like little Miss Genius I am, for suspecting the poster the other night LOL (even if I didn't recognise it for being from TD...or Muppet Treasure Island for that matter)

Is the story a birthday present for Mr. Nash??

Susan: You are the genius who cracked it. I had no notion of building a story around it then but, sure, it's all practice innit?

I threw Gavin's name in, he's a great man, wasn't thinking birthday tho'. You're ahead of me yet again. :)

I bow to your greatness. It was a fantastic read that kept me hooked!

I must be thick. I hate to admit it. I got it all the way trhough and loved it but the ending is lost on me.

Please give me a clue and don't ascribe my failure to your writing. I often miss the punchline in jokes, too. I'm too literal or serious or something. Otherwise I loved it, Ken. Thanks.

Teagan: 'Bowing to my greatness' is perhaps being overly kind. But thanks. :)

Elisabeth: You are *definitely* *not* thick. The exercise was to see how close to 'obtuse' I could go and still keep the reader - I knew that many would not get it.

All it is: In my Twitter picture, the poster in the 'Top Left' corner is for the film Taxi Driver.

But it's impossible to read that, even in the blown up version of the picture - I put in the tagline from the film as an extra clue but it's still not playing entirely fair, I think.

Thanks for feedback, I appreciate it muchly. :)

I'd twitter you If I knew how Ken... good stuff mate - I really enjoyed that... spot on!

And the film rights are with whom...?

What fun! You are amazing, my friend!

Sorry. Got here late. Should've taken a taxi I guess. ;)

Well done! You always know how to draw us in.