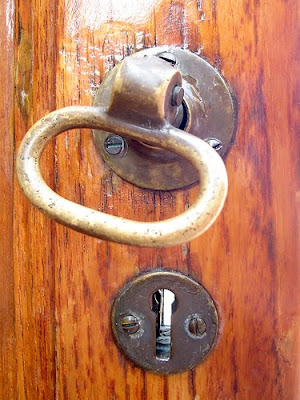 My Dad is one of the world’s greatest hagglers.  He will haggle himself a deal no matter what the occasion.  So, when he and Mum came to visit us in London, back in the mid-nineties, I reckoned I knew something he would like.

We did the usual stuff, we bought them some dinners and they saw a show but, when Dad got out of the car on the outskirts of Hounslow early on Sunday morning, he knew his real treat-time had arrived.

Is it still there, I wonder?  That big big field – with a gate and everything – and miles and miles of cars, boots open, folding tables laid out, with their owners nonchalantly displaying their wares.  The Mother of all Car Boot Sales.

I had added one finesse to our visit to the Car Boot.  Something specifically designed to heighten Dad’s fun.  It was… a ‘Mission’.  I had thought hard about something I needed, something odd, something to hunt for.  What I came up with – and I hope I’m giving some of you a new word here (although you are very smart, so probably not) – was a little thing called an 'Escutcheon Cover'.

The front door of our little house in Twickenham led straight into the living room and the front door had a large keyhole through which the West London winds would come a-blowing.  An escutcheon is the metal plate that goes over a keyhole to protect the door from the knocks of misguided drunken key-entries.  Sometimes they come with a circular cover piece which can be swivelled around to let the key in but normally they just sit over the hole and keep the draughts out.

So there we were, on a mission to find an Escutcheon Cover on a bright warm summer’s morning.  It really was a very nice excursion.

One of Dad’s foibles is that he absolutely has to talk to everyone he meets.  What’s more, he addresses everyone with the same cheerful familiarity that would lead you to believe that he has known them all his life.  This made for slow progress through the lines of marketeers.

At one point I had to ease him away from a gang of heavily-tattooed motorcycle guys who were eyeing him suspiciously as he prodded them on the forearms and cheerfully asked whether ‘those things hurt?’

Of course we were never going to find an Escutcheon Cover, much less a suitable one.  It was just something to keep an eye out for as we strolled around.

Except he did.  Hawk Eye Dad pounced on a plastic box full of assorted things and emerged with the exact item pinched in his fingers.  A solid brass Escutcheon, complete with cover.

It was here that I learned a valuable lesson in haggling – one that I often use (or at least quote) in my dealings with people.  That lesson is, When Haggling, Start Low.

The man in charge of this particular car boot was reclined in a deck chair reading a battered copy of 'Jaws ' and he seemed hugely disinterested in how his trade was progressing.  Dad leaned over to him with the prized item pinched between thumb and forefinger and he started the bidding in a way I would never have guessed.

“A little thing like this,” my Dad said chattily, “Sure you couldn’t want any money for that at all.”

The man looked uncertain.  He looked at Dad and he looked at the little Escutcheon (and cover).  He hesitated.

“You’re right,” he said, sounding as if he was surprising himself, “I couldn’t ask for money for a little thing like that.”

It was like the Jedi Mind Trick in real life.

Dad said, “That’s great, thanks,” and prepared to withdraw before anyone changed their mind – which  is  another good haggling-hint.

But suddenly a shadow fell on proceedings.  A huge, bejewelled, floral-patterned woman emerged from somewhere to the side of the car.

“Well that’s just bloody great!”  she bellowed, “I sit out here all morning and you give the bloody merchandise away.”

She wasn’t kidding either.  But we smiled and nodded and got swiftly away with our totally-free brass escutcheon.  Even at some distance, we could still hear the poor man getting ‘what for’ from his beloved.

“This is a grand place,” said Dad, looking all around. “We’ll have to come back.”

You Dad sounds suspiciously like my Mom...never met a soul it didn't sound as if she already knew!

Can I borrow your dad next time I have to buy a car?

A Scot in London said...

That is pure class. Do you hire your Dad out? Would he come to Istanbul or Morocco with me for purchasing purposes? I am the world's worst haggler.

I LOVE your Dad!! LOL And I so enjoyed this story.

It reminds me of a car-boot story about my own Dad; too long for a comment so I'll tell it on the blog this week.

What a great story. I bet your dad had a wonderful time that day.

Sorry Ken, from the title I thought you were going to SELL your dad at a car boot sale!

And yes... that's my Dad! He's either in church of a Sunday morning, or he's at at his place of worship on others.

Perth has several car boot sales too. We call 'em 'Trash and Treasures'. My Dad trolls the untidy aisles - with his eye open for but one thing: the prize!

That might be whatever we spoke about the night before - or whatever he noticed might have been chipped or broken in our household - something that might need replacement.

That was a great yarn Ken... I loved it mate!

My mum wasn’t a haggler but she loved a bargain and was addicted to charity shops. She went daily come rain or shine. And every time I visited she had something for me. Sometimes I’d go with her. Once I found a tie I quite liked and she said to give it to her because she’d get it cheaper. I think they wanted a quid and all she wanted to pay was 50p but they wouldn’t back down and so I thought that was me. As we were walking home she reached into her bag and handed me the tie. She’d nicked it!

What you need to understand is that my mother was the most Christian woman you’ve ever met and yet in her head this wasn’t stealing and the fact is that no sooner had my dad died than all his clothes were into black bags and handed into a local charity shop; I managed to salvage a trilby which is too small for me but it reminds me of him. And the same when Mum died, in fact she’d already got rid of most of her clothes herself and her wardrobe was practically empty apart from a dress to bury her in.

My dad loved to go the auctions. He would bring home all sorts of assorted purchases. We kids would often tease and ask him if he got our mother at the auction.
Yours is a gem of a story.

Parents become much nicer as they become older. My dad is amazing.

Scot in London: He would know everyone in Istanbul and Morocco... or at least their 'people'. :)

Carol: I think he did, although we never did get back.

Ben: That could be arranged...

Jim: This is one of my favorite comments ever, I just love it. Thanks. :)

May: They seem to become more accessible. As a parent, I try to be accessible now, only time will tell if I am fooling myself.

So do I, with my children.
When you give love, it comes back. The same applies to hate.