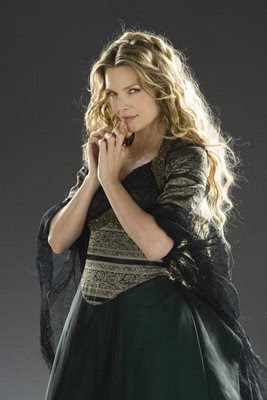 I came to this movie on DVD with a number of prejudices.

In fact I might not have come to it at all if Matt of MTMD hadn’t rated it so highly. My hand had already brushed over it in the video shop (will it ever be the DVD shop?) several times, my brain saying 'nuh-aww, life’s too short'.

It’s a really good film though, I recommend it to parents with young teens who would like to sit down with a movie – perhaps over Christmas – and be engaged and entertained. I think this is just the film to do that.

But let me tell you about those prejudices before we get into all that. The screenplay for ‘Stardust’ was co-written by Jane Goldman (sorry to do this Jane but it’s my prejudice and I have to explain it). Jane is married to Jonathan Ross, talented controversial British talk-show host and, wait-for-it, foremost TV movie critic in the country.


The movie was pushed hard on Jonathan’s show and the impression I got was that the production was populated by British celebrity chums and a peppering of A-Listers who were having favours called in.

I concluded that this was a silly confection, best avoided altogether and so I duly left if alone.

Then Matt recommended it just when it was coming up to Friday night and that helped. You see, Friday nights are always a challenge for me. On those nights, my son John and I like to settle in and watch a good movie. It’s just that, him being twelve and all, the list of movies which can keep us both hooked is rapidly dwindling. We’ve done ‘Cloverfield’ and 'Be Kind Rewind'. So, a couple of Fridays ago, we had Stardust.

‘Stardust’ is adapted from material by the excellent Neil Gaiman – first a series of DC Comics then a novel. It stars Claire Danes and Michelle Pfeiffer, relative newcomer Charlie Cox and that host of familiar faces that threw me off the damn thing in the first place.

It’s a fairytale. I’ll tell you what it’s like, shall I? It’s like ‘The Princess Bride’ except played much straighter. William Goldman’s excellent film was all-knowing and full of insider-swipes at the fairy-tale genre. ‘Stardust’ on the other hand, believes much more in fairy tales than ‘Princess Bride’ ever did.

Claire Danes recreates that ‘something magical’ she had so much of in Baz Luhrmann’s ‘Romeo and Juliet’ – and which she hasn’t had any of since. Michelle Pfeiffer is dazzlingly beautiful when she is required to be (how does she do that?) and the smaller-parts are often most-charmingly played.

Star of the show for me among the smaller parts was Mark Williams as Billy. You may know Mark as Arthur Weasley in the Harry Potter movies. He does his acting work with such integrity. Watch him in ‘Shakespeare in Love’ as the stammering narrator of the play who comes good at the critical moment. In this movie, he plays a goat transformed into a man by witchcraft and he does it quite brilliantly.

Bum note? Okay (sorry) Robert De Niro strikes a distracting bum-note in this, his much hyped ‘Gay Pirate’ role. He prances and gurns and looks unconvincing to the core. I wish it was otherwise, it’s a fun part that somebody could have enjoyed doing.

So, come Christmas, if you can handle a little sexual frisson and a Gay Pirate or two, settle down with somebody young and try this one. It surprised me, it may do the same for you.

And did it keep John entertained? Well, he’s currently in a bit of a ‘meh’ phase where it’s often hard to tell the ‘brilliant’ from the ‘dreadful’.

But he did ask for it to be paused while he went to the bathroom.

A friend gave us the Stardust DVD as a gift. My husband and I were both "meh" going into it, but found we really enjoyed the movie. We're big "Princess Bride" fans, and I think it was fair to compare the two. Now I just need to finish the Stardust book that same friend gave us.

Sounds good, just when we're collecting new DVDs for Christmas. I still want to read the book before seeing it, loving Neil Gaiman as I do.

Pausing's a good sign... wandering off to get ice cream and then ending up in the back garden with a football would have been less good.

Think I'll be getting it.
Thanks!

Nice review, and thanks for the links and the tip of the hat....love Michelle Pfeiffer, and you're dead-on about Claire Dane.

I spent Monday 12 noon-4:30 am at my friend Vicki's house...After discussing American politics, Inside Government, catching up on everything, lunch and dinner, we watched DVDs all night... A triple feature: Stardust, Big Fish, and then 3:10 to Yuma.

Vicki was so-so on Stardust, but she doesn't like fantasy and computer generated effects. Her husband Larry however loved it and even Vicki said it's a great movie to watch with your kids!

From my experience, asking to pause the movie is a very good sign.

A very good sign if they ask us to pause it. :) They seldom do. I look forward watching this one but I think ours are too young yet.

The last time they asked us to pause a film we watched 'Lemony Snicket's A Series of Unfortunate Events'. They love that one.

We're gonna watch Charlie and the Chocolate Factory on Saturday, we're reading the book for them these days and they wanted to see the film afterwards.

Thanks for the nice review.

Oh and writes down Big Fish on the todo-list. :) Thanks Matt!

And TPB was better... well it IS my favourite movie ever so I'm a little biased.

But... I didn't mind Stardust.

That sounds like just the sort of movie I would enjoy!

I don't honestly think it would be my sort of film. Nevertheless, your review makes me feel I'd like to see it, which can't be bad. Well done, in fact.

Meh...lol... if you recommend it, then it will be worth watching.

I didn't even watch princess bride, perhaps this christmas vacation, I will.

Btw, I tried something at Gewgaw,..lol

Ironically, the very reason I've never rented it was Robert DeNiro...whose work I love but the scenes with him in the trailer were awful! So you're saying if I can um...run to the bathroom without pausing during his moments, I'll possible like this one? :)

"Big Fish"...one of the most oddly amazing movies I've ever watched. If you can suspend the adult need to whisper, "There's NO way!" then it sucks you in and takes you on quite the ride!

Hi Haley, I loved the Princess Bride too but I'm a big William Goldman fan anyway.

Susan: If I could find a DVD that would encourage my eldest to end up in the back garden with a football, I would buy the whole damn shelf of them! :)

Matt: Big Fish it is then, might not be tomorrow but v. soon. :)

Connect... your experience counts for a lot with these things. Not falling asleep is good too.

Øyvind: Lemony Snickett was quite good, I liked the bit with the train the best, I thought it went a little downhill with Carey's subsequent characters.

Cellobella: We have Princess Bride and the OBH in common so. :)

Daisy, I think you would like it, there is something pleasantly feline about Michelle (see pic). Don't you lover the way the pic matches the header... I do!! :)

Thanks Dave, you are too kind, send me a postcard if you like :P

Jena :PRINCESS BRIDE, you've got to!

You should see it Hope, Bob won't ruin it for you - he actually gives all it a good shot but he carried too much baggage from his earlier iconic roles to carry it off, possibly it was not his fault.

The film was okay but still haven't read the book although I read a lot of Gaiman's. Anansi Boy is good and hope if ever it becomes a movie, it will be good...

I kinda liked Stardust, but not enough to see again or anything. I'd say your review is pretty much dead on. I'm not a huge fan of De Niro anyway, and he almost kept this one from being any good at all. It was only funny for the first minute and a half or so, and then got more tired by the second.

Still, it's a fairy tale, so how much can you really expect out of it?

The boyfriend and I saw saw this in the Cinema while I was still living in Dublin and we loved it. I still haven't bought it on DVD though... I'm so behind!

Glad you liked it Ken.

Hi Kruel 74 (is that your real name?) I particularly liked Gaiman's American Gods... 'want to read the new one over Christmas.

Celtophilia: I can expect quite a lot from fairy tales. Why, in little red riding hood, I thought Granny and The Wolf were going to...

Linc, Linc, Linc, you weren't supposed to come back til Sunday when we're doing topless darts! Come on down with your tattoos and such just beware of who might influence who. You might fly home with a song from Cabaret in your head and a book of earyl ninteeth century love poems. Howillyalikedemonions? eh? :)

Dear Reggie: I'm glad that you're glad that I liked it. Really glad.

I enjoyed it. Nothing award winning but fun.