Is it Still a Snog Fest? 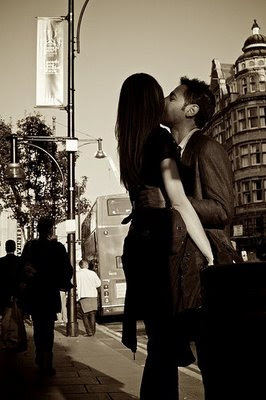 When I was a teenager - before the Dublin Post Office has bullet holes in it - New Year's Eve was a very big deal.

It was about snogging. Pure and simple.

Maybe it was just me but, back in those 'wilderness years' of 15, 16 and 17, kisses often seemed to be in bloody short supply.

New Year's Eve offered itself as a teeming oasis in the midst of this Kalahari of consensual lip-contact. Dec 31st was a free-for-all. Everybody could kiss everybody, no-holds barred.


We all used to rush to a place called 'The Baymount' in Strandhill. This club/dance hall/den of innocent iniquity comprised two extremely large halls which were interlinked by one tiny set of double doors. The object of the night was to pass through these double doors from one hall to the next as many times as possible.

This was made interesting because both of these two halls were absolutely jammed to the rafters with revelers. Getting through that link-door on those nights was as close as you could come to another human being without risking an unwanted pregnancy.

And the kissing... (almost) everyone you met that night wanted to kiss and be kissed. It was as close to a Bacchanalian Wine Fest as I am ever likely to see.

Maybe it still is? Maybe all that ruthless snogging is still going on out there?

I sincerely hope so.

I'm completely happy to stay at home this New Year's Eve and attempt just one kiss, round about midnight.

But, if it's still the case and you're still the right age, stock up on that old Cherry Chap-Stick, go somewhere crowded and just... pucker up.

You may as well. It could turn out to be another Kalahari year.

Couldn't tell you if they've changed however...I've been too tired to last 'til midnight for years. I'll check back to see what the others say!

"before the Dublin Post Office had bullet holes in it"

You make it sound as if you are so old. A wonderful story, very well told. Most certainly brought back some memories but we are not going there.

good post - and another side to your character revealed!

Had my first kiss on New Year's Eve when I was in the sixth grade... hope I'll get lots more this year. You're totally right... during my middle school and high school years, kisses were hard to come by except on this night of nights...

Happy New Year to you and your family.

I've had lots of rowdy NYEs. Much drinking, much snogging, much cavorting. Used to be my favourite night of the year.

Things are a bit quieter these days. I still like to go out...but like you there is a lot less random snogging!
x

One of the senior citizens was once commenting about "Sweet 16 and never been kissed". I innocently added, "I'll bet I'm the only woman in this room who is still kissing the boy she kissed at 16."

There were lots of sighs, many of which insinuated I'm a sentimental fool. Except for one woman, who groaned. When I looked her way she said with a sigh, "I was just thinking about the boy I kissed at 16. Gross!"

New Year's Eve reminds me that my 16th year is when he said he loved me. Guess he meant it. He's still the one who gets my New Year's Eve kiss.

Hi Susan, I'm actually going out this New Years - unheard of for the longest time. But it won't be like the old days (or, if it is, I will be in some trouble).

Yes Lyndi, I'm not quite *that* old. I was standing at the GPO one day in the late nineties, examining the bullet holes and when I turned around there was an American TV crew filmng me, they wanted to know what my thoughts on the subject were and, although, I didn't have many at the time, I gave them something anyway. I wonder where that footage went to? :)

Dave: You're 'freaking me out'. :) What the hell have I let slip this time?

Dear Cecilia, if you have been around the Baymount in Strandhill, I would have taken my number and joined the lengthy queue. :)

Rachel: 'A lot less' eh? But not 'none'. Hmmm... naw, I'd never make it time, besides the 'Westlife' debacle would have scuppered any slim chance... :)

Thanks for that Hope, of course you know this story isn't sweet an it certainly isn't gross (God 'elp us) it Absolutely Bloody Wonderful! How fantastic that there is still room for constancy and magic in this roller coaster world of ours. Give him a swift peck for me on the night.
x
(there) :)

Hi Ken,
Found you through Rachel...and yes, what a great post! A snog fest indeed - loads of memories shaken and stirred here : )
cheers

I've never been a big fan of New Year's Eve, although your version is quite a romantic one. My first year in NYC, I went to Times Square for the dropping of the ball, and I WILL NEVER DO THAT AGAIN. People were "snogging" all right...but they were also drunk, and throwing beer bottles and getting in fights and...but that was before all the extra security and police barricades. Anyway, have a Happy New Year. I hope the kiss at midnight is the best one of the year.

Wonderful post. NYE in Dublin sounds about perfect. Here (Washington State), the roads are wet from all the rain. We get home early to avoid the drunks...

Hi Henson, yes drink and stuff was an issue back in my day too. But I never took a drink until I was 21 (there's a post there, I think) so it was the kissin' that floated my boat! :)

Hi K, thanks for dropping by. Interestingly, it wasn't in Dublin but in my home town of Sligo. I live right beside Westport now and I enjoyed your photos of there on your blog.

I've read a lot about Irish novels and stories, and I've never heard of this one.lol...enjoy your snog Ken. Happy New year.

May you be more successful in the year 2009 and become a known Hollywood celebrity, in writing of course, a playwriter or screenplay writer.

Ken, I have a holiday home in Carrowholly outside of Westport. Where do you live? (You can email me via my blogspot profile, if you want to avoid crosstalk.)

Las summer my wife and I read The Secret Scripture, a terrific novel set in and around Sligo. We also climbed Knocknaree.

Never heard of snogging. When I was growing up in the States, we had "sparking" Sparking was when you went outside in the dark with a person of interest and a wintergreen lifesaver. Legend has it that the lifesaver would spark when you crunched it between your front teeth. Of course, the other person would have to be very close to see it. You get the picture....

Hey K, I know Carrowholly - very nice. I'm up the road in Castlebar, let me know when you're around and I'll buy ya a pint. The book you refer to is on my list - Sebastian Barry, the author, is a wonderful writer. His play, 'The Steward of Christendom' gave Donal McCann perhaps his last great performance.
I was born in the shadow of Knocknarea and, I am ashamed to admit, I have never been up there to see Queen Maeve's grave.

Hi! I find your blog very interesting. I am subscribed!!