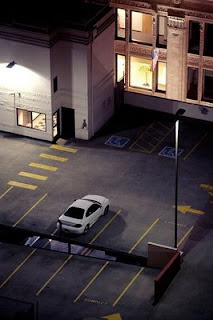 I hadn't intended that my two young men would have songs attributed to them but it sort of worked out that way.  It started with John who was born nigh on twelve years ago at midnight (both of my guys are midnight's children).

It had been a hard day - all right, maybe a bit harder for P than for me but we guys go through the mill too you know.  Anyway there was tiredness, tea and toast and lots of other t-words and then it was time for me to go home and let mum and newborn baby sleep.

I got to the car and the three weeks of hospital time finally caught up with me. I sat in, feeling exhausted and hyperactive all at the same time...

And I put on the radio.

And the song was just starting.

It was Paul Simon singing 'Saint Judy's Comet'. A sweet lullaby for father for child. At that very moment it became, for me, John's song and it will always be so.

After Sam put in his own midnight appearance, some years later, I sat into the car and wondered what the radio would give me this time when i turned it on.  I got 'Four Seasons in One Day' by Crowded House. The effect wasn't as monumental as the Paul Simon song but this nonetheless embedded itself as Samuel's Song and cannot now be listened to in any other context.

I wonder if other people associate songs with their kids becuase it was the first song they heard after they were born?

In my wild single years, I saw my share of closing times at the Jersey Shore Bars. I'd frequently shout to the band, "I'm not going home 'til you play Brown Sugar!" My ob-gyn suggested that Rex and I bring along some favorite CDs to the hospital when it was time to deliver. After many many hours of labor, it was time to push, and Rex put Disc Two of the Rolling Stones' Hot Rocks collection on. Seven and a half songs later, London was born. Why didn't she tell us "I'm not comin' out 'til you play Brown Sugar?"

Yes, you will always associate the song with the moment- especially with your kids.
Enjoyed the read.

With me it's 'An Irish Lullaby (Too-ra-loo-ra-loo-ra)'. It's not that I heard it but the hospital was full of Irish nurses and so I ended up singing it to my daughter when I finally got to hold her for the first time. I know... big sappy daddy... but she really was lovely.

I don't recall specific songs for my kids, but I definitely have songs for moments, and other that remind me of certain people.

Great picture to go with the post, You are very talented at evoking a mood with words.

Not necessarily at the time of birth, but as they were growing up. It was a mixture of Kenny Rogers and Abba..."Through the years," Chiquitita, Fernando..."

I would like to mention this. When I hear the song that goes this way "When Irish eyes are smiling, it is like the moon an stars..." I always remember my mother. Likewise with the song, "Danny Boy" Because she often sang them when she put us to sleep when we were children.

When I hear those two songs, I always remember her.

This was a poignant post for me so I submitted it to "entreview".

Not really....but I do associate a German lullaby that my Mother used to sing to me, and that I then sang to my child.

It's funny how important music is in our lives, isn't it?

Hi, Ken. I'm new to your site, and I am really glad to read stuff from a proud dad. I will most definitely be back.
As for songs connected to the birth of my children, I honestly can't remember. My fourth and youngest is now 22. That was a freakin' long time ago! I'll have to go dig out my 8-tracks!

James Taylor, Sweet Baby James for my first born, also a James. It still makes me smile and he is a young man now.

Younger son had health concerns to overcome, so We Are The Champions by Queen became his anthem. He is a champion, he is stronger than anything nature tried to hand him!

Thanks for the reminder.

When I was pregnant I kept singing the Karl Wallinger as done by Robbie Williams song 'She's the one' and I knew the baby would be a girl (and she is). It was weird because I don't normally listen to Robbie Williams at all but that song just beat its way into my head!
There have been lots of other songs since she's been around but that was certainly the pre-birth one.
x

I don't have any songs for my children, but I have had their names picked out before we even knew for sure what gender they were going to be. I knew our youngest was going to have red hair. And when my brother's wife was pregnant with their first I had a dream they were having a girl with blond hair and blue eyes. That turned out to be true as well.

Matt: Why am I not the least bit suprised by family-wide-ABBA-Ringtones?

Jim: you've gone and done a 'Jim Royle' on me now. Beneath that rugged exterior...

Thanks Jennifer, I also like this picture very much.

Hi Jen: When I was coming home from college in Dublin on occasional Friday evenings, the five hour bus journey was frequented by a Kenny Rogers cassette. As a result, songs like 'She Believes in Me' can have an irrational effect on me. 'Danny Boy' is also know as The Londonderry Air, the lesser-known second verse rocks... well... not 'rocks', exactly.

Debbie: Sweet Baby James is a fine lyric for a child, "...With ten miles behind me and ten thousand more to go ".

Rachel: I liked that Robbie Williams song too - great ice skating on the video - but seriously, an oddly touching version.

Brady: If you dream anything about me, don't tell me, eh? :)

11 years ago my one and only son was born. His song in my head was Bob Dylan's "Make You Feel my Love"as I saw it as the ultimate love song of those years. I have to admit to feeling slightly miffed when it became a hit by Adele and that it is now a karaoke song. Of course he prefers all versions but Dylan's at the moment, although he does have a good ribbing sense of humour while dissing Dylan's gnarly vocals ;). Bob Dylan was my mentor! His Dad however had a Kylie Minogue song in his head. Vive la difference!