Any Aussie Got a Photo of Tom Waits and Me? 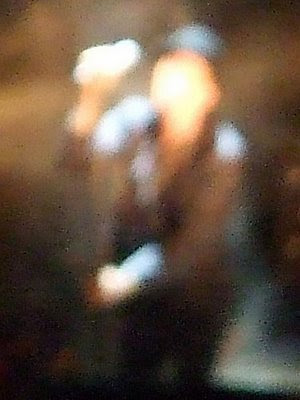 On a cold week-night evening in October 1985 I stood outside the stage door of the Dominion Theatre in London and waited for Tom Waits to come out.

I had never done that before for anyone and am fairly sure I will never do it again.

Tom had played a series of shows in The Dominion - I had been to see him the night before with a bunch of people and was so blown away that I was tempted to drive back into the City Centre to wait a while and just tell him how good it was.

Through the stage door, I could hear the end of the show. Tom played three encores, one more than the night before. The closing song was 'Blue Valentines'.

I wished I was inside for that.

Perhaps because it was the last night of his London stint, it was well over an hour-and-a-half before Tom and his band came out. The time was passed quickly by chatting to the many people who went in and came out of the stage door to pay their respects - among them Elvis Costello and Bono.

When Tom finally appeared, there was only me and a young Australian couple left outside the door. I told Tom that I thought the show was fantastic - he said, "Aw gee, thanks," and he Autographed my Rain Dogs album. He told me he was on his way To Newcastle to do some songs for something called 'The Toob' (The Tube with Jools Holland and Paula Yates - 1982-1987) and sure enough he was on it two days later on Channel 4.

It was great to meet him, I'm glad I took the trouble.

The Australian guy said, "You gotta get a picture" so me and Tom stood in together and this guy took our photograph.

After Tom had left, I gave the guy my address and made him promise he would send the picture on.

I never got it... guess what else?

So if you happen to be passing through this blog and you think you might be that Australian Guy from that night in 1985, could you check your photo album and maybe, if you happen to see me in there, give me a shout.

PS - Of course I've seen Tom quite a few times, most recently this year in Dublin, review here.

I quite imagine you WOULD like to have it! I would like to see it. I hope the Australian guy sees your plea and sends you the photo.

Wouldn't it be lovely if you got it, after all these years?

You've answered my own blog post tonight, too... I've been wondering what to get with my new Amazon certificate. DH is VERY much the Tom Waits fan, so now I have an idea...

And, congratulations on what sounds like a fantastic night out in 1985. It was a great year for me, but I didn't get to meet Tom!

Wow, wouldn't that be a small world/small blogosphere story? I take a lot of photos and sometimes neglect to pass them along to their rightful owners, but if I read your plea I would track you down. Alas, I am a Jersey Girl (Tom Waits style), not an Aussie Guy. Would love to read Happily Ever After here one day.

That was 23 years ago Ken, but who knows what miracles the internet would be able to accomplish.

Would like to help out. Alas, no can do!

Maybe he never sent it because (it being back in the dark ages and hence the days before digital images for the masses...) he had forgotten to put film in his camera!
x

Margaret: I bet I look silly in it... but I'll never know (sigh)

Susan: I don't really have any hopes of seeing it, 'just an excuse to assemble the little memory on the screen. Oh yeah, get him TW but which one?

Roxy: Jersey Girl indeed. "down on the shore everything's all right, you're with your baby on a Saturday night..."

Dave: even this one is beyond your control? shame. :)

Rachel: Ever the realist. You are drizzling gently on my parade. :)

Awh I hope he reads this and sends it to you. He has probably lost your address at this stage!

Hello Ken, now I'm influenced by your post. lol....visit this link to learn about it.

I was thinking more that it was a bit blurred and he was passing it off as himself.
I think you should change your post-title to something with "Tom Waits" in it (reverse the order of the words too) and put that in your tags (or did you? I'll check). Also, the word Aussie would help. You might e-mail the online Australian newspapers and get them to advertise for you...I'm getting out of hand now. Just trying to help.

Hi Carol: A bit like that *old* picture I use for this blog :) Well, no, maybe a bit younger than that. And the moustache, oh God, the moustache. :)

He probably has, Reggie, but he can leave a comment here and we'll work something out. :)

Hi Jen, I can't make that link work, even with a dot after www. :) BTW, I haven't posted the book yet - waiting for new copies to come to me - won't be long.

Great Advice Kat! I took all of the first part of it, the second... meh :) Actually I think I might 'Tweet' it and ask Aussies to Tweet it on :)

I already really liked you for what I've read of your blog and your posts on the forums and blogs we both frequent... but you *met* Tom Waits!?!!!!! Did you know he is my favorite person on the planet, my hero, my muse, my dream? I'm infinitely jealous that you met him. One day, one day, I will have that luxury. Just to shake the man's hand... *swoon*

Hi Tata: Very pleased you dropped by and comments, Thanks! :)

Tom can be heard in concert here for free, it's quite the treat

Kindly try this new link. I hope it works this time.

and btw, no you're not that old of course. Aging is all in the mind.
Cheers.

I am jealous. Not just for the obvious reasons, but also because it seems like it was really easy to meet famous people in 1985.

Somehow I don't feel Arctic Monkeys/Kings of Leon/The Strokes would be quite so receptive to me hanging around outside the stage door to say hello.

A friend of mine met the lead singer of Vampire Weekend, and does have the photo evidence, but I am as yet pretty much unversed in the ways of Meeting Your Heroes.

Thanks Jen, it works now. Interestingly, that song was written by an Irishman - Brendan Graham. I always think it is terribly like the middle part of Danny Boy - I know my Dad thinks this too. :)

Hi Fiendish. :) I think we can touch our heroes if we make the effort and don't get all weird on it. For example, I wasn't looking to marry Tom or anything :)