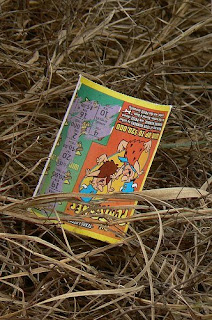 For we the compulsive people-watchers of Ireland, there is really only one television programme worth tuning in for.

I refer, of course, to ‘Winning Streak’.

The simple truth, which many fail to recognise, is that this is the only programme on any station anywhere where the producers have no control whatsoever over who appears each week.


‘Your name comes out in the draw? You’re on mate!


‘Winning Streak’ is the ultimate celebration of that most elusive of creatures - ‘Your Average Punter’. Every week, five versions of ‘Your Average Punter’ are hauled from their oceans of mundane saline to lie flapping and gaping on the imitation-leather chairs of RTE’s Studio One. This, of course, is any sane TV producer’s nightmare and that is exactly what makes it is so very compelling to watch.

Most shows can withstand a brief moment or two of exposure to ‘Your Average Punter’. You see them on ‘Questions and Answers’ periodically, they ask the same question as the guy before asked and they press the panel for an answer. They phone up ‘The Late Late Show’ now and again in order to flash their bleary insights at passing celebrities. Pat always cuts them off before the celebrity responds. Pat is quite right to do so.

We may glimpse them in the wilds of the RTE schedule from time to time but ‘Winning Streak’ is their wildlife park. Here they can lollop around, resplendent in their average-punter-ness.

They can show how intelligent they almost are.

We can watch them squirm.

Mike Murphy is the resident zoo-keeper and this article has no quarrel whatsoever with him. Mike is a consummate media professional, silky and un-aging, the only man in Ireland who can still carry off wearing a beige suit with grey shoes.

He fearlessly extends the hand of over-familiarity to the row of expectant televisual virgins. He jokes with him. He shows them how to push their buttons. He gives them money to take home.

At about the same time he is doing this on TV, Mike can be heard doing something else on the radio. He is the presenter of the countries principal Arts Review Programme. This is Mike’s natural environment, he discourses knowledgeably on Diverse subjects from ‘Proust’ to ‘Wagner’. He lets us know what he is currently reading. He mixes with the best of them.

One listen to this programme will punch home to the unwary viewer just how far off his home turf Mike is with his Saturday-night row of hopeful scratch-card draftees. They think ‘Proust’ is a form of washing powder. They believe that ‘Wagner’ was married to Natalie Wood. They really don't care, they just want to get their money and then be allowed home.

Mike bridges the extraordinary gulf between his experiences and theirs by employing the sort of cheerfully-encouraging manner one might expect from a Gonhorrea doctor.

“Have you anybody with you?” he asks.

“They’re a rough-looking bunch,” he says, “you’d want to stay away from them.”

On his Arts show, Mike plunges in head-first. He delves into his guest’s deepest sexual yearnings and unconscious fantasies. On ‘Winning Streak’, he treads much more tentatively. Lines of questioning like, “So, Dolly, do I hear that you’re a bit of lesbian?” simply will not go over well with the guest’s assembled well-wishers.

The very best weeks are when five lads all line out together. Always fresh from propping up the Donnybrook bar in search of gallons of false courage, they slouch aimlessly behind their buttons and grin as their idiot sons wave inappropriately-sloganed socks from the back row of the audience. One gets the firm impression that the studio air would be thick with the smell of farts on these nights.

The various competitions are all subtle variations on a complex little game called ‘Spin The Friggin' Wheel Missus’. Each season, the management succeeds in coming up with increasingly perverse angles on this limited theme. The punters look increasingly baffled as the winnings pile up.

And when the money is all dispensed, the relatives all paid off, and the studio floor mopped dry of another weeks puddles of nervous urine, we sit and wonder ‘what was it all about?’

It was about people. Real, honest, God-fearing, good people. People just like ourselves. People who should never be let anywhere near the front of a television camera because we are so Real we will only look completely silly and get laughed at.

The people who look good on television are not ‘Real’. They are not ‘Your Average Punters’. They are neither like us or from us. They know nothing about us.

And yet still we always seem to vote for them.
Posted by Ken Armstrong at 20:00:00

Ah yes! We have something similar here for the South Carolina Education Lottery.

Too much do do on the computer and if not that, then there are too many books still unread.

This is a wonderful summation of all the things unique about these programs.

You are a people watcher extraordinaire!

Hee - you're right, that show is strangely compelling.

In my local filling station (the one just over the border from me), they have a selection of framed photos of everyone who's won a scratch card in that shop and then gone onto the TV... Bless 'em. It's amazing to see the range of the hostess's dresses!

Excellent details. I particularly liked the beige suit and grey shoes. Well I didn't like them...but you know what I mean.

Hi Margaret, I'm sure there are lots of these programmes now. I would guess that few are so blatant about how easily they give the money to the punters, you really don't have to anything but turn up...

Hi Catherine: The lady contestant outfits are always cutting edge as well (cutting edge of the kitchen table). Good luck on the radio today, if it's archived somewhere, I'd like to hear it.

this sounds like a show I would enjoy tremendously! I know folks who've been on the air who really shouldn't be allowed. ;)

My brother's father-in-law won something like $10,000 in the S.C. lottery thing. The funny part was that he was "sworn to secrecy" until it aired. I don't think there were too many people left who were actually surprised when it did air. ;)

Hi Hope: emmmm... you father's brother-in-law?? Isn't that... your third cousin or something? (Family confuses me).

Hey Man, Have you updated your blog yet with technorati...they're still showing your old URL and that the blog hasn't been updated in 31 days.

Hi Matt: I had to start again with the new domain name:

The old one is still sitting around like a lemon. If anyone knows some magic trick for combining the two, I'd love to hear it.

Whilst writing if any of you kind folk have links to me at my blogspot address, an update to this new(ish) address would be most welcome :)

Excellent observations, especially your final commentary about "real people" on TV. Wish we had some of those shows over here...heh, heh...great job...

Something I began to wonder last night...

If American people were to watch RTE, would they think, "My God, Irish people are ugly?"

As always, I loved the post. Really really. Too bad I can't remember Mike Murphy, of course...

Great rambling post...I can almost imagine it. Do we have to change the old URL? Because it is still functional. Happy blogging!

Fiendish - and if they did the drama course /and/ can speak Irish, they end up on Ros na Run (missing the fadas there, sorry)!
We have the same thing in Wales with home-grown soap Pobol y Cwm. Even Ioan Gruffudd did a length stint on it.

Thank you Henson Ray... stop looking at that bottle, I need it! (see Henson's blog for details).

Fiendish: The show wouldn't be a great advert for us, would it? I think it's the family members in the audience who really let everybody down. If I got on, I would pay some handsome people to come with me. I don't suppose... never mind. :)

Ros na Run (to hell with fadas (spit) is supposed to be feckin' brilliant. But I never watch it, it being in Irish and all. One of my film scripts has been professionally translated into Irish - I don't know what happens in it anymore. :)

Hi Jena: 'Rambling?' 'Rambling' surely you're thinking of somebody else, I don't ramble! :)