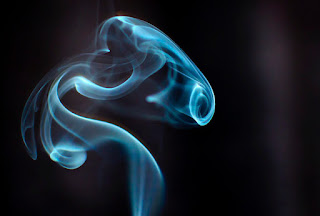 Every day, when I walk through the town, I pass this little shop. You know the type, portraits of steely-blue-eyed wolves in the window, tarot cards, posted flyers for clairvoyants and healers and whatever-you’re-having-yourself. I don’t ever go in but it’s a welcome addition to the streetscape. It’s quirky and fun and it’s something different from the norm.

But they burn joss sticks in there. I know they do because the aroma leaks out onto the street as I pass. It doesn’t travel very far; it’s just sort of localised to the pavement immediately in front of the shop so it’s not really bothering anyone or doing any harm.

Except I don’t like the smell, I really don’t.

I didn’t always not like the smell, not as far as I remember anyway. It was something I was largely ambivalent about. 'Take it or leave it Ken', that was me when it came to the smell of a burning Joss Stick. But, somewhere along the line, something changed my mind and now the smell actively repels me.

I started to wonder why that might be. Have my olfactory preferences altered as I’ve crept inexorably toward the Big Six Oh? Have I just become weird? I came up with a theory as I lay in bed one night, waiting for sleep to slink in. For whatever it's worth, here it is.

When Mum was alive, our house at the Riverside was a constant melee of smells, all of them good. There was cooking and cleaning and an open fire in the grate. There was freshly laundered sheets and freshly caught fish and there was apple tart. Man, oh man, there was apple tart. I loved Mum’s apple tart. If I was coming home from college in Dublin on a Friday evening, as I so often was, whenever I arrived in the door after the (then) four-and-a-half-hour journey, there would be apple tart and hot tea waiting for me. I wondered why I loved that tart so much and I got a hint as to one of the reasons when I saw one being made once. There was a serious amount of sugar in there.

Then, after Mum died and Dad was alone in the house, the smells weren’t so abundant anymore. Don’t get me wrong, Dad kept an immaculate house with everything ship-shape and in good order. He kept as happy a house as possible too, with his good friends dropping in of an evening to share his Sky Sports football and consume copious amounts of biscuits and tea. But bless him, he wasn’t baking apple tarts of making aromatic stews and roasts that filled every corner. Instead, he bought a packet of joss sticks in the Two Euro shop and took to planting one at the base of the Sacred Heart picture, beside the red lightbulb, and lighting it up.

I reckon that’s where my issue with the little burning sticks comes from. My home of lovely smells and lovely tarts became a place of aromatic burning which lingered long after the burning was done. I don’t think I was angry or disappointed about this turn of events. I don’t think so. I still loved coming to the house to see Dad, I still loved being there. I think I just missed my Mum, gone far too young at 72, and the burning smell was a physical reminder of all that.

That's what grief does, in my sadly increasing experience, it creeps around the alleyways of your mind and finds strange and quirky ways to keep itself quietly constant. Just yesterday, I was looking at a writer promote his science fiction book on Twitter and I decided that this would be a nice book to buy and post up to my eldest brother Michael in Sligo. He always enjoys a good science fiction tome, particularly if it’s part of a trilogy, as this one was. I was some way down the tracks with this train of thought when I remembered that, of course, Michael isn’t in his house in Sligo anymore. He left there, and us, last year.

The point, I guess, is that if you ever see me walking past your funky little shop and I seem to turn my nose up at it, don’t be too put out or annoyed. It isn’t you, it’s that harmless little thing you’re clearly burning in there. I’ve got a thing about them, you see, but it isn’t you, it’s me.

So, please, as I said at the start, carry on.

We are of the same mind. Never found a need for joss sticks and can’t imagine one ever arising. Which is good because I happen to be married to a wife who hates perfumy things too and has a far more sensitive… whatever the nasal equivalent of palette is… than me. (Actually it’s “nose” boringly enough.) Never seem a woman move through the perfume section of Arnotts faster in my life. Neither of us are anti-smell. Who isn’t going to appreciate the smell of freshly-brewed coffee or frying bacon? But that’s about it. My last wife had a signature perfume—Aromatics Elixir—and she used to buy me Aramis back in the day I shaved. I didn’t hate it but it really wasn’t me. Trying to remember the first aftershave I tried. Had to be Old Spice or maybe Brut. Hai Karate [sighs and thinks of Valerie Leon] is also not out of the question. Always but always used too much.

For you and I whenever we hear Carmina Burana we immediately think Old Spice but that’s not the case in America apparently. As this old ad testifies.

Smells, so I’ve been told, are more likely to trigger memories than any other sense. When I come home there’s no arguing that our house has a smell. It smells of us, a couple of years’ worth of us. And it’s a comforting smell. The same as when I walked into my parents’ house only in their case we were talking decades. Impossible to describe. But distinctive and, for me at least, welcoming. If I was to pick one single component of what made up that smell it would have to be polish, Pledge to be specific. Now that brings back memories.