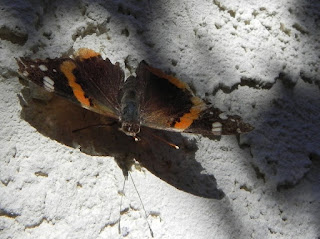 I was down around the side of the garage the other evening, most likely pursuing something cat-related, when I came upon a butterfly. I think it was a Red Admiral and there are two reasons why I think that. Firstly, it looked like a Red Admiral. Secondly, it’s the only Butterfly name I know.

It can be a bit dull and damp on the ground down the side of the garage, even at this time of the year. No place for a Red Admiral, or whatever the hell it was, no place at all. On closer examination, the butterfly was clearly in a bad way. There was black on its wing tips and, on one of the wings, the black was extending downward towards the body. The Butterfly perched on the ground and did not seem inclined to move at all. I reckoned the cat would have it if I left it there, so I resolved to move it. But where could I put it?

I picked it up gently by the black wing tips. It twitched a little but that was all. There are some plants at the front door, and it’s fairly sheltered from the breeze there, so I choose a nice white flower and placed the butterfly gently on it. For a few minutes, I rather naively thought it might find some sustenance in the depths of the flower, but I quickly realised that was probably an ignorant rubbish notion on my part. I hit the kitchen and mixed up some water with a lot of sugar and put some drops of that concoction on the flower beside the butterfly, who didn’t look at all well.

That was it. There was little else that I thought I could do. I had a brief and silly image of me sitting in the vet’s waiting room, in among all the dogs and cats and birds, all of them hungrily eyeing-up the little blackened insect perched morosely on my knee. A quick headshake. No, that wasn’t ever going to happen.

I had done my bit. I moved on.

The next morning, the butterfly hadn’t moved. The blackness had spread over a much larger area of both its wings. It sat on the flower, in the same position as I had left it, the sugar water seemingly untouched. It was clearly dead. I lifted it off and took it away in case the cat found it, even there, and toyed with its blackened remains.

That’s it. That’s the story.

I’m not an exceptionally good person or an easy touch of a softie or a fool, at least I don’t think I am. But if I happen upon a situation where I can think I can conceivably do something to make things a tiny bit better, I will generally try to do it. I don’t seek those situations out. In fact, I increasingly seek to avoid them. And the things I do may sound nice in a little anecdote like this one and it may make people think that I’m some kind of bloody saint or something. But I’m not. Trust me, I’m definitely not. I’m just a regular Joe and, in a lot of cases, my paltry efforts prove to be completely ineffectual. Most exercises in kindness or attempts at repair seems ultimately pointless. Just a waste of time.

Except they’re not. They’re never really a waste of time. I’ve written something like this before in these pages, perhaps more than once. It’s a theme I tend to return to in my head, now and again.

But I did do some good. I did some good for myself.

By taking a little action with the butterfly, I reminded myself that I’m a person who cares about little things, someone who will take a little time to help, if I can. I reminded myself that, despite some occasional evidence to the contrary, I’m not such a bad person really. I’m okay. I came away from the whole ‘butterfly thing’ feeling a tiny bit better about myself.

Because that’s the thing, isn’t it? Anyone who does the occasional ‘good deed’ knows the dark secret just as well as I do. It isn’t simply about the tiny bit of good you do or fail to do. It’s about the benefits you reap for yourself by stepping in and doing it.

You can actually feel pretty good about your kindness, even when the object of your kindness doesn't make it.

I’ve not seen a Red Admiral in decades. They used to frequent our garden growing up but rarely any others; maybe the odd Cardinal. I remember when I looked at the pictures of British butterflies in my beloved Arthur Mee Children’s Encyclopaedia and there were so many I’d never seen. Where the hell were they all? I’m mean it’s not like snakes where there’re only three of four indigenous species that pretty much keep to themselves. Insects were commonplace during my childhood but over the years I’ve noticed fewer and fewer. We talk, for example, about our bee. We have a bumble bee that visits our garden. That’s what it feels like, one bee. It may indeed be the same bee—I mean, how can you tell with bees?—but I’d like to think he’s passed on the coordinates to his chums. I’ve not seen a wasp though in years although we actually had an honest-to-goodness housefly a few days ago. An housefly, singular. Where are all the ruddy flies? They were everywhere when I was a kid. Dirty great buggers. And ants. I have not encountered an ant in so long. I don’t exactly miss them but where the hell are they? About the only bugs we do seem to have an abundance of are slugs and snails. There’s a whopping great leopard slug living under our cupboard-cum-hut in the garden at the moment. You tend to see him and his cohorts at night clearing up after the birds.

I do get the whole compassion thing with the butterfly. I’d’ve done the same, soft touch that I am. A few days ago I had to go out and direct one of the Darrels (Daryls?) out of the garden. We’d decided to leave the gate closed since they can fly now but although this one—the runt of the brood—had managed to get into the garden he or she couldn’t get out so I opened the gate but the stupid bird kept wandering along fence frantically trying to find a gap big enough to squeeze through. I finally went out with a broom and tried to nudge her towards the gate. Oh, I felt so bad because all I did was made her panic even more, to such an extent his or her breakfast was upchucked much to the delight of the opportunistic magpies. But what’re you supposed to do, not help?

It's like what John McLane replied when they asked him in Die Hard 2, "What are you going to do?" He said, "Whatever I can."