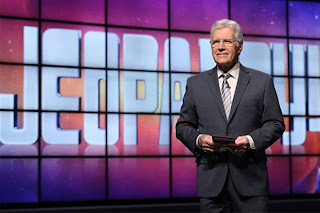 It is important to remain entertained when one stays at home.

There are four of us in this house and there are things we all come together to watch on the telly. By necessity, those things have a ‘common denominator’ quality to them. That doesn’t mean they are bad though.

One surprising life-saver has been Jeopardy on Netflix. I watched one once, when it first appeared there, just out of curiosity, and quickly decided it wasn’t for me. Then I watched another with my elder son, John, and he seemed to like it. So, we tentatively brought the whole family unit in for a viewing of the third episode and that was it, we were hooked.
There are some downsides. Sometimes a category of questions is very USA-centric, and we have no chance of engaging with them. But this is surprisingly rare. Generally, it is a gentle entertaining watch, with the late Alex Trebek an eternally genial host and quizmaster. Because the winning player returns, it is easy to build up a relationship with a repeat winner and feel under threat whenever they are under threat and cheers their successes. Sometime a player is just too loud, and we enjoy making fun of that. It doesn’t sound like much, but it is. It’s something to enjoy and that’s invaluable.
There is also the knowledge that Alex Trebek passed away recently and that he knew something of his fate as he recorded the episodes we currently watch. On one college episode he announced that he had ' a tear in his eye' the day before when the contestants had all done really well. You don't fake that.

We like Gogglebox too and we’re glad it came back on Friday, though we haven’t sat down with the newest one at time of writing. We’re all adults now, the youngest being twenty, but we still fast forward through the naughtier bits. Life’s too short.

Monday night is Quiz Night, with Only Connect and University Challenge both getting a watch. Gosh, this sounds very highbrow, but it isn’t really. We don’t have a high hit-rate on the questions, and they are getting harder and harder these days as the end of both series approaches and the semi-finals and finals kick in. But, again, you get to know the returning teams a little and Jeremy is nicely unpredictable. We watched one from ten years ago on YouTube one evening and it’s amazing how Jeremy’s pace of questioning has slowed over the years. None of us are getting any younger, I guess.

My own personal treat is to watch a film. Late at night, when everyone else has gone to bed or at least to some other room, I’ll see what I can dig up on Netflix or Prime or recorded off the telly. I usually can’t manage the whole film in one sitting ‘cos I’d never get up in the morning and I’d just fall asleep anyway, but I can usually get a flick in over three sessions and that’s not too bad. Most recently, I watched ‘The Trial of the Chicago Seven’ and found it to be very entertaining. Before that, it was ‘The Rental’, which was okay and ‘Sputnik’, which I also enjoyed. Next up might be ‘The Dig’. I’d like to see the original version of ‘Rams’ so I’ve booked that in too.

I read too. Mostly at night but I’ve rediscovered the joy of sitting on the couch and getting some pages in. Recently, I became quite immersed in ‘The Mirror and the Light’ by Hilary Mantel. I surprised myself by how involved I got into it all. Lockdown, I guess. I also enjoyed ‘The Mercies’, though I’ve been advised that enjoyed is not the word to use. ‘Shadowplay’ was also very involving. At the moment, I’m reading some George Moore for Castlebar Library Book Club and learning some stuff as I go.

I got a nice pair of Bluetooth headphones for Christmas, so I use those for music and a podcast or two while I’m cooking. I’m a long-time listener of Kermode and Mayo and they are like old pals who help to see me through.

I had pretty much given up on going to the Cinema before the current trouble arrived. I wonder, will I go back a little more afterward? I don’t feel a particular drive to do so but there is a feeling that one should celebrate our eventual emergence from this cloud by seeking out groups of people and places where we will once again be able to congregate. I’ll wing it, I think.

How much of an effect has the last year had on me? It’s hard to know. Not much, perhaps, but really quite a lot. I feel older than the year that has passed. I’m like a stone, on the ground, and the pandemic is like a constant drop of water, drip drip dripping down onto me. Any effect is hardly perceptible but, over time, there will be some kind of a dent in me. A hollow. It will hold water when it rains. Maybe small birds will come and drink there, maybe an insect will drown…

Ack. Don't think too much. Entertain yourself. Here’s to home entertainment and minding ourselves and taking care of each other.

Oh, I write a blog too. I nearly forgot about that. Thinking about it and doing it and sharing it has been an important part of my home entertainment programme.

Thank you for dropping by.

I love to read but somehow I don't seem to manage it, except when I'm on holiday and I switch off all technology. Perhaps I ought to do that more often.

Lockdown has meant that I've walked a lot more and I'm really glad for that because it's allowed me to discover local areas which have now become favourite haunts.

I too have kept away from cinemas for a whole, and will continue to do so until people have learnt to put away their bloody mobiles for ninety minutes.

I'm not even sure where I'm going with this but I wanted to post a reply, acknowledging that this past year has changed us all but that some of it has been in positive ways.

As best I can remember the last film I saw in the cinema was Star Trek Into Darkness. I went to an early viewing and was literally the only person in the auditorium. (Surely it should be viditorium.) I had been to see a film in the past when there were only two of us in the audience but it was nice that the last film I will likely ever see on the big screen I got to see alone and in peace. I wrote a poem a while ago about first last things and wondered what the first thing I did for the last time was. I decided, for the sake of the poem, it was saying goodbye to my first best friend but it might've been eating a banana in all honesty. Now I guess I've clocked up hundreds if not thousands of last times. Of course you don't always know at the time it's going to be your last time. If you did you might pay more attention, relish the moment. You know it's quite likely I will never wear a tie again.

On the entertainment front what can I say? We don't watch quiz or game shows. If one happens to be showing when the TV gets turned on and we're waiting for something to start I've no problems leaving the sound on for five minutes but I'd never go out of my way to watch one. Not like we used to do with the likes of The Golden Shot and The Generation Game back in t'day. There's just too much available now. It's burdensome actually. But we chip away at the mountains.

We have a garden now. It's not much of a garden. Technically I suppose you'd call it a yard. No lawn and hardly any plants. I've not been out in it much. Mainly to the bins and back. But I have swept it once. We don't plan to do much with it. Nothing that would involve anything resembling gardening. Carrie's put out a couple of bird feeders but it's early days.

We've been listening to a lot more music since we moved. The brick walls provide decent soundproofing so I don't need to worry about annoying the neighbours or waking Carrie when she's napping. I've also got some Bluetooth headphones and they're fine but I don't like wearing them for any length of time. I like my music to breathe

Lovely post. Loved your description of the effect of the pandemic, really powerful imagery.

I highly recommend the original Icelandic version of Rams ( I saw it in Cannes, la de dah) it's really funny and touching.

Also check out Another Round if you havent seen it yet. Probably my favourite film I've seen in the last year.