What Would the Pussy Cat Do? 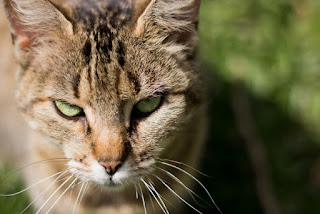 People often say how your life flashes before your eyes right at the end. I’m beginning to develop a slightly different theory. I increasingly think that your life comes back to you, in bits and pieces, after you turn fifty-seven or so. Then, when the inevitable comes, it’s all been gradually assembled for you like a jigsaw puzzle. Okay, maybe this doesn’t apply to everyone. Maybe it just applies to me.
I wrote a few weeks ago about dredging up a memory and having several other ones come up with it. Since then, the old memories keep on coming and coming. That’s how I’ve developed my theory. Maybe it really is just me, though. It usually is.

(As a side note, the spelling in this post is about to become quite atrocious so bear with me.)

This particular memory cul-de-sac started a few day ago when I said something to somebody that I had never said before. I said, “I’ll go out in the afternoon unless I take a figeary and go out in the morning instead.”

This is something my Mum used to say. It is yet another thing I had forgotten until it randomly popped out of my mouth. It means something like ‘a notion’. I might take a notion/I might take a figeary. It might be Irish. I haven’t got a clue.

Now, full disclosure. I’ve editorialised a bit here. In my random blurted-out statement, I meant to say ‘figeary’ but the expression I actually used was another one that my Mum used. Another one that I had completely forgotten. In fact, it was this second one that reminded me of that first one, if this makes any sense at all.

I actually said, “I’ll go out in the afternoon unless I get a feechy faw and go in the morning.” And this was an incorrect usage.

As I said, my spelling here is probably atrocious. Just let me off. Think about it, I meant to say ‘figeary’ and instead I said ‘feechy faw’. The spelling of these strange, dredged-up words is a secondary consideration.

Firstly, it’s not ‘a’ Feechy Faw, it’s ‘the’ Feechy Faw and it means something completely different to ‘Figeary’. The way Mum used it, it was like putting the ‘Kybosh’ on something, hexing it, making it somehow worse than it was before. A context sentence might be something like, "She put the Feechy Faw on the whole day out when she said it was going to rain."

Are we good? Good. ‘Cos we’re only getting started.

This little word-memory-thing sent me down a rabbit hole of the rhymes Mum used to say to use when we were little. You know the type. The kind of thing you might do when bouncing a baby on a knee. You are probably familiar with such gems as the riding of a cock horse to Banbury Cross or going round and round the garden like a Teddy Bear. We had those… but we had other ones too.

One of our local ones involved having baby in the lap, held by both arms, and rowing back and forth. “Row the boat to Ballymote, row the boat to Collooney.” Both these places are little towns in my home county of Sligo so I guess this one hasn’t travelled very far. Perhaps there are local variances.

But I digress slightly. The point I wanted to make about the rhymes was how sweet and lovely they seemed when they were being done to my little sister or, God help me, to me. But now, when I look at them through the lens of the aforesaid fifty-seven-year-old man, I can’t help but feel that some of them were a tiny bit strange.

Things that absolutely seemed fine then, well, as the young folk say, they tend to hit a little different now. Back in the day, if I were a bold boy, and this was not unheard of, my loving Mum would sometimes call me an ‘Antichrist’. That doesn’t seem to play too well when I type it now, but it was fine at the time. It felt gentle. Go figure.

For Daddy to Come

With Sweets in His Pocket

…and none for Dirty Kenneth.

I know, I know. It sounds like there should be an investigation or something, but I promise you it was all as gentle and loving as can be. It just doesn’t type up all that well.

It’s this last one, though. Now that’s it’s popped unbidden back into my head, on the back of all those Figearys and Feechy Faws, I just can’t seem to shake it off. It never troubled me back in the day but, man, it’s freakin’ me out a bit now.

Chop Him Up for Firewood.

If He Doesn’t Do for That

Give Him to the Pussy Cat.

I tend to recite this in my head as a staccato declamation. A little like something the good village folk would chant to you while they held hands in a ring as you gently broiled inside The Wicker Man.

I can take the ‘chopping me up for firewood’ part. That doesn’t seem to faze me. It’s that other part. Yes, that.

In our back garden, we have some transient cats who often bide a while. One is all sweetness and light, a little paw raised to the window as if to say, ‘might I possibly come in for a little while, partake of a little milk perhaps?’ But there’s this other one one who hangs out under the trampoline and he’s quite a different proposition. He looks at me, safe behind my bedroom window, and his glare seems to say, “If you were a bird, mate, I’d get you under my paw and you’d just see what I’d do to you.”

As my mind repeats my childhood nursery rhyme, it’s not the chopping up that haunts my dreams. No. Here I am, fifty-seven years old, wondering why on earth my dear departed Mother would give me to the Pussy Cat.

And, if she did, what on earth would the Pussy Cat do with me?

Crumbs, I think there's potential for a horror story in that last rhyme, Ken. It's like something Stephen King might brood over.

On a lighter note, this post got me thinking about "row the boat". When the kids were little, I used to do varients (there's another word that has darkened in meaning this past year). I'd row the boat down the river, or the stream, or even the road -- and paint myself into a corner trying to quickly come up with a new rhyme every time. They loved it.

My parents had a few odd expressions being from Lancashire in the north of England. The fireplace they called the "cornish," stools were "buffets" (you sound the t, like crumpet) and the living room was "the house." As a cornice Is an ornamental moulding round the wall of a room just below the ceiling I suspect this is where they got "cornish" from although they definitely pronounced the sh at the end; a buffet is actually a sideboard when found in a kitchen and what they should've said was buffet-stool but as for calling a separate room within a house "the house" I have no answer to that. My parents were not educated people and never pretended to be but every now and then they'd use a word and I'd wonder where the hell they picked up that. "Covetous" was one from my childhood. I was, apparently, a covetous child and my mother often chided me for this but never actually explained what it meant. (A common failing with many parents I have no doubt.)

I've seen a couple of cats around the neighbourhood but no dogs. Next-door has a grumpy-looking cat we call Moggie since we've yet to meet either of our neighbours and that's been four months. Moggie sits on the fence at bottom of our garden and is very photogenic. Got a great photo of him during the last snow shower looking cold and miserable with his icy skullcap on.