The Exorcist and Me 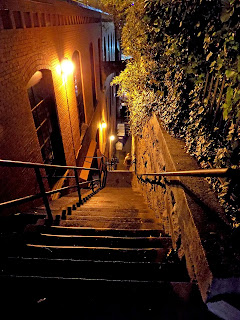 The touring theatrical production of The Exorcist is coming to Dublin for Halloween week and that has put the film back into the front of my mind. I’d like to go and see it but I don’t think I will. It’s a bit of a trek from here.

But I remember the film well…

By the time The Exorcist came to my hometown in 1974 I was already something of a veteran at trying to sneak into the cinema to see grown up movies. I was ten years old.

We didn’t try to get into unsuitable movies for any old reason. It was all about Bruce Lee. Bruce was everywhere and everything in the early seventies and you were nothing if you hadn’t seen him in the flesh (so to speak) up there on the big movie screen.

So we had techniques for at least attempting to get in. Hiding in cloakrooms while some older-looking kid bought the tickets, that kind of thing. Sometimes it worked and sometimes it didn’t.

But, when The Exorcist came to The Savoy on Market Street in ‘74, we didn’t even try. We knew, almost instinctively, that it would be too much for us and that we just weren’t ready. We wouldn’t have had a chance in hell (sorry) of getting in anyway. This one was too hot.

But stories reeled around the town of the things that were happening inside the darkened halls of The Savoy. Heads were spinning, pea soup was being thrown around, the worst kind of words were being shouted and growled. There was an illicit, ‘too much’ feel to it all and the queues were long and patient.

Oddly enough, we never called it The Exorcist. That word comes with three syllables, each of them pretty equally emphasised. No. We put colossal emphasis on the middle ‘or’ syllable, and called it ‘The Ex-hor-cist’. This led me to slightly misunderstand the nature of the film. I thought that it concerned a priest who was exhorting a demon to come out of a little girl. Not a million miles from the truth but not quite right either. Or maybe there’s some truth to it. Now, as I write this, I’m not entirely sure.

I didn’t actually get to see The Exorcist until it was re-released to Cinemas in or around 1989. Its withdrawal from the home video market left me with no way to get to it and, by that time, I was intensely interested to see it.

But there was a false start or two before then.

The Omen seemed like it might partly fill the gap left by not seeing The Exorcist but, alas, it just didn’t do it for me. I like it a lot more since but, at the time, I found it far too insipid and safe. The presence of long-established Gregory Peck seemed to be a constant reassurance that nothing too terrible was going to occur and that proved to be exactly the case.

When Exorcist 2 came out, I had no problem getting in to see that. By then, I was a venerable fourteen years old and no one was going to accost me on the way in. I was too much the regular attendee for everything that was showing. Although the glimpses that film afforded of possessed Regan from the original film were rather tantalising and made me want to find the original film even more, Exorcist 2 was and remains easily one of the very worst films I have ever seen.

I even had a horrible rematch with it, some years later. The Savoy announced, in small text in the paper, that The Exorcist would be playing for two nights only on the Tuesday and Wednesday of a particular week. They were school nights so not my usual movie night but I made some excuses and got myself off to see it, dripping with anticipation. But they weren’t showing The Exorcist at all, they were showing bloody old Exorcist 2 again. I have rarely been so angry.

I finally got to see it on a wet Saturday afternoon in Dublin, when I had nowhere to be for a few hours. The cinema was mostly deserted, so it was me and the film with little to distract from it. I found it bleak and a bit troubling while also seeing that it was indeed a major and important cinematic work. The special effects didn’t bother me at all, I’m largely immune to that kind of schlock stuff and the detective part seemed a little ‘by the numbers’ though I can’t help but feel that Lee J Cobb’s character and the character of Columbo fed off each other in some creative way that I could never quite figure out.

Today, in 2019, I have an unusual view about The Exorcist and I can’t quite tell where or when that view was formed. It certainly wasn’t in the humid Dublin cinema in ’98 although there was definitely some element of unease there. I think it was much later, in fact… much later.

I hesitate to even talk about it. I’ve found that it is well nigh impossible to talk about any kind of good art without opening yourself up for inspection along the way. When something touches you inside, that part of you becomes a little more uncovered and sometimes, in talking about it, you can say too much or give too much away.

I don’t really want to do it. But I’ll say it anyway.

For me The Exorcist is not really about demonic possession. For me, it speaks about aging and infirmity and the fear we have of those things. The person in the bed that we all fear is not a demon or a devil, not really, it is an old person, a dying person, a person whose mind has slipped away. That person lives in the closed room at the top of the stairs and they are always there. Life may go on outside as before, there may be parties and ceremonies and exercise and fresh air and conversation but the person in that room at the top of the stairs is always there, always waiting and, sooner or later, they must be attended to.

Of course this theme is overtly stated at several points in the film through Fr. Karras’ relationship with his mother. There is no missing that. But I think that occasionally centre-stage theme also succinctly permeates practically every other scene in the film.

When did I form this view? As I said, it wasn’t back when I first saw the film or when I saw it again many subsequent times on DVD or on television. It was when real life showed me some genuine aging and infirmity, first hand, and some moments came when I said to myself, ‘this is a bit like The Exorcist, isn’t it?’

Do I think the writer and film maker set out to make a film about aging and infirmity and then went on to dress it up as a demonic possession flick? No, I most certainly do not.

But we all take what we take from art and then we hold that as our own.

And, in doing so, it maybe tells us something about ourselves.

Remember a while back I mentioned how few horror novels I’d read? (If you don’t remember I was probably talking to someone else and it might not have even been online or this century.) Anyway I’ve only read a handful, mainly James Herbert, and The Exorcist circa 1971. A tatty copy was doing the rounds in the playground and somehow I ended up with it. I’d never read anything like it. Still haven’t. Didn’t much like it either, not even the dirty bits. There was a lot of hype surrounding the film but I was pretty determined not to see it and I didn’t. Unaware at the time they’d included some of Tubular Bells in the score but once I found out I was even more determined not to see anything that might sully my appreciation of that album. And after a while it became a thing, a point of principle, not to see The Exorcist. I was very keen to watch A Clockwork Orange and have and it was okay and I don’t understand what all the fuss was about but I’m not sure I’ve even seen more than a few seconds’ worth of clips and a few stills from The Exorcist. I’m sure now it’d be quite tame—we see worse on TV weekly—but I’m simply not interested. I’ve gone this long and it’s not like we’re short of stuff to watch.

But I do get your point about making a film your own. Not sure I can think of an example because all the films I’ve ever watched I’ve made my own and I’ve no way of knowing how anyone else views them but obviously there’re the ones where the location, the time or the company were significant like being the only person in a cinema when they screened a film ( Star Trek Into Darkness I believe, which was also the last film I ever saw in a cinema and may well be the last time ever see in a cinema the way things are going) or the first film I took a date to (Tommy in 1975) or the time I watched Billy Connolly in Big Banana Feet in a tiny film house in Wishaw and laughed so much I had an asthma attack.

I think the contract between the artist and the viewer (be they watching a movie or reading a book or even staring at a painting) is that you can read into it what you want and in fact you should. So much of Youtube is people sharing their interpretation of films, tv and any other art you can think of.