To Live in a County of Heroes 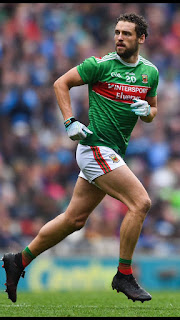 I don’t know anything about sport. I only know how I love drama and sport has loads of drama in it. So this is me writing about sport, it probably won’t be much good.

I live in a county who has a football team made up of true heroes.

Earlier this evening, Mayo’s run at the 2019 Gaelic Football Championship came to an end. It happened in Croke Park in Dublin. For the first half, Mayo used masterly control and tactics to maintain a hold on the scruff of the game, effectively taming their formidable opponents and keeping them in check. In the second half, Dublin unleashed themselves and went on to run rampant over everything green-and-red that moved.

So Mayo’s ride is over. For this year. Only for this year. Because Mayo have a team that is made up of real heroes. They will never give up. And next year surely is another year.

Mayo came second in yesterday’s battle and any other result would have been a stunning achievement. Dublin have forged a machine. They have always had advantages in resources – their catchment area for talent is vast compared to the others - but they haven’t always capitalised on it. Now that they have, they are the epitome of an unstoppable force. One has to credit the commitment and skill and power of their team. To stand against them, in these heady days, is akin to David standing against Goliath.

But Mayo, our heroes, step up, nose-to-nose, toe-to toe, and they fight. And, face it, they lose. Time and again, the Dublin machine comes through.

But the stats don’t tell it. Not even a part of it. The bravery, the commitment, the skill, the drive to succeed against the greatest of odds. Every year, the men of Mayo give us their all.

And when it’s all over, as it is today, do they return to some life of rest and remuneration? Are they cossetted until it comes time for the next battle? No. They return to their work, their everyday jobs, just like you and me. These battles they fought, the months and months of readying themselves, the injuries, the blows, all of it is for love of the game, all of it is simply to win.

And when the win slips away, a moment is taken to live inside the pain of that. But then it is time to get up again. On to the next. To fight and fight for one more chance to face the unstoppable foe. Until one day… one day, they will be stopped.

Growing up, I didn’t really know that this game existed, although it was right there on my doorstep. My town was primarily a soccer town or at least the people in it who I knew were soccer obsessed. The only indication that a big game was on was the traffic delays around that stadium just outside of town. It was only when I came here to live in Mayo that I got to know something of the tribal power of the game.

We are so lucky to live in a County where our team are such natural born heroes. It is a great thing. But we are also so lucky to love in a county which treasures these heroes so.

Mayo is not only a county of player-heroes, it is a county of supporter-heroes too. Turning up in droves in whatever windy corner they must next play, following their team until there is no place else to go.

I also know next to nothing about sport. I’ve heard footballers referred to as “Saturday’s heroes” but I could never find any passion for team sports and very little for any other kind although I did follow snooker for while when Alex Higgins was at his peak. I did play rugby as a kid but because I was the fasted kid in the school I was always left or right wing which meant I spent most of the game trotting up and down the field with bugger all to do because the ball so rarely reached me and when it did I had one job, run like the clappers and try not to get tackled. So I really didn’t feel like I was in a team.

I didn’t support any team as a kid and even during big events I’ve never rooted for my national team. I mean I’m proud to be a Scot and all the rest but sport’s a game and not a test of national character or anything. I couldn’t even tell you what my local football club is or where its ground is and I’ve lived here for about sixteen years.