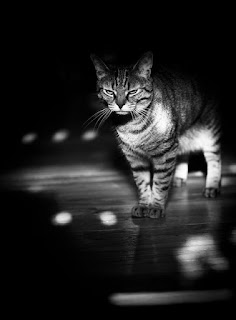 Yes, I am bloody sure. Thank you very much!

I don’t even mind it all that much. It seems a natural function of aging, that one would get a little more miserable. It’s nothing to be too alarmed about.

But what is worrying is the level of inconstancy I am bringing to my grumpiness. The only consistent thing about my ill-humour is how consistently inconsistent I am.

Of course it makes sense. Read it again!

I was driving to the butcher’s shop, as you do. Cruising up the street, keeping an eye out for a parking space. What happened? I’ll tell you what happened. At the traffic lights at the end of the street, a pedestrian walked out in the middle of the traffic and just expected me to stop to let them over. I had a green light, they didn’t. Never mind, here we go. ‘Straight out in front of me.

“Bastard… fucker…,” I muttered as I sailed on past them, hopefully making my point about them waiting their turn to cross the bloody road.

So I got parked around the corner and I trotted over to the butcher’s shop, like a good thing, and then I trotted back again. Except, when I got to the traffic light at the end of the street, I thought I saw an opportunity to slip across the road, between the oncoming cars, without having to wait for the pedestrian light. But, guess what? The oncoming car wouldn’t even slow down a little bit to let me nip over. Not even a little biddy-bit.

“Bastard… fucker…,” I thought as he sailed on past me. Probably feeling smug for having made some dumb-shit point about me having to wait my turn before crossing the road.

And then it struck me. It’s struck you already but it only struck me then. You’re evidently a lot quicker than I am.

I had succeeded in being grumpy on both sides of the exact same scenario within the space of five minutes.

This was impressive… and also a bit worrying.

I don’t want to turn into some West of Ireland Victor Meldrew, finding fault from every possible angle. I want to be reasonable in my grumpiness. To be justified in my little annoyances.

Plus there’s the hypocrisy inherent in the above situation. How can I be outraged about doing something and then go and do the exact same thing myself, expecting it to be all right?

It reeks of entitlement and general all-round silliness.

So, as of today, I resolve to do better. I will be as grumpy as hell but I will be consistent in it too.

No need to thank me.

Grumpiness kind of crept up on me, like grey hair and, like the aforementioned grey hair, it spread without me noticing until, well, you’ve seen my latest profile pic which I have to say I’m not entirely displeased with. I like the look of old age even if I’m not that enamoured with how it feels which, to be blunt, is pretty shitty most of the time but never shitty enough to qualify as being actually ill just not a hundred percent. I’ve not been a hundred percent for a long time, so long in fact that I couldn’t tell you the last time I was but I could also not tell you the last time I didn’t feel grumpy. It’s the grit in your eyes or the itch you can’t reach or the trapped wind or the… oh, Christ! there are so many of these wee niggles and… I’m not a hypochondriac but I will admit to being a valetudinarian if you define the former as someone who imagines things are wrong with him and the latter as one who’s generally pissed off at being “not a hundred percent” all the time.

I think what prompts grumpiness amongst people including those lucky, lucky beggars in perfect health still boils down to percentages. What percentage of efficiency, comfort, happiness will we settle for? I, for example, do not expect my computers to boot up in twenty seconds. I wish they all would but the expectation is unrealistic. A minute I can tolerate—it all depends on how urgently I need to get into my machine—but once we’re nudging ninety seconds I’m beginning to lose what little (okay, I admit it, very little) patience I have.

Imagine you’re driving down a long, straight road and every light you hit is green. Wouldn’t that be a joyful experience? So maybe grumpiness is all about obstacles, not the satisfying obstacles like finishing a story or having a good poo but the ones that stymie—if you’re a golfer or snooker if you’re a, well, snooker player—us. At first we see these as challenges and learn curve shots or cushion shots and are rightly pleased with ourselves but after a while it’s not important to show off; we just want the damn ball to go in the hole so we can get to the nineteenth hole (and whatever the snooker equivalent of that might be—player’s lounge?) and be done with it.

Ken and Jim, the best advice I can give you two from much further down the crotchety path is to embrace your inner curmudgeon. Isn't it interesting that so many synonyms for grumpy start with the letter C?:
carping, cantankerous, captious, cheerless, childish, choleric, churlish, complaining, contemptible, crotchety, crabby (or crabbit), critical, cross, crusty, curmudgeonly, curt, cussed...