The Joy of Being Decried 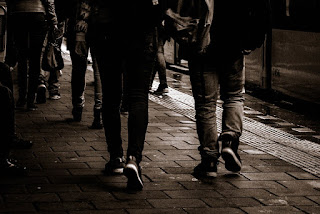 This is fresh. It only happened the day before yesterday.

I had to leave the office for a quick visit to a place a few doors down. It was Friday afternoon and I was a bit full of the joys. On the way, I met a group of three people coming towards me.

I knew them so I gave them a greeting. I might have been a bit over-effusive, in retrospect, but hey it was a lovely day and the weekend was fast approaching.

So I sped past these good people, my words doubtless still ringing in their ears, and I went in and did my little bit of business.

That business was transacted way quicker than I thought it might be. To my surprise, I found myself back on the path to my office within two minutes flat.

The people who I had said 'hello' to were now just ahead of me again. They must have stopped to look in a shop window or perhaps to punctuate some point in their conversation. Whatever the reason, I found myself gaining on them yet again, as I had done a few scant moments before.

But, me being me, and odd as anything sometimes, I didn’t want to overtake them again. Perhaps I felt I had used up my best conversational ploy at my first encounter. I don’t know. Whatever the reason, I hung back a little behind them. The door to my office was only a few more paces along, I could slip in without them ever knowing I was there.

So there I was, keeping pace a little behind, in that pre-weekend sunshine, when I started to tune in to the conversation that was being had up in front.

One of the three was saying, “He’s really very nice.”

Another was saying, “I know that, I know. It’s just the constant brightness. I just find it so bloody tiring.”

And then I realised. They were talking about me.

I had reached my door. I opened it and went quickly inside. I certainly didn’t want to be spotted now that I realised I was the subject of conversation. I got in and closed the door behind me. They never knew I was there.

That’s the end of the story, really. Whatever comes after this is just me editorialising.

First off, I’m pretty sure they were talking about me. Two of them were sticking up for me and one was continuing the point that I am a bit of a fucking pain in the arse. That’s all good. I don’t tend to think that person is wrong. I have no gripe. I am a pain in the arse.

In truth, the only even slightly interesting thing about this tiny event is how I reacted to it after I got behind the safety of my door. I was elated, delighted, surprisingly raised up. I got such an honest-to-god buzz out of hearing someone berate me, admittedly in the most gentle of terms.

I think it’s because I feel I am quite a lightweight person, really. Easy going, usually trying to be nice and do the right thing. Boring, not-a-force-to-be-reckoned with. That sort of thing. To hear someone say that I annoyed them seemed to somehow grant me a little more weight, a little more gravitas, in my own eyes. Suddenly I am a person who can annoy people. I am an annoyance. It really felt like the best news I had heard all day.

There is a possible second reason. I’ve written about it elsewhere in these pages. It's here actually.

When I was young, maybe ten or so, I walked behind two ladies who were complaining roundly about my Dad, about how he always came around collecting the rent with such an annoyingly cheery disposition.

i think I’ll have me a piece of that.

“O wad some Power the giftie gie us, to see oursels as ithers see us!" I am not an effusive chappie. No one has ever referred to me as “bright”. Overcast, perhaps. The most consistent feedback I’ve had over the years has been—and, perversely, I take some pride in saying this—intimidating and yet despite that wall people have sought out my friendship, actively. I can’t understand what the attraction was. I mean I never turned anyone away who wanted to be pally (one can’t have too many people in one’s corner) but it still puzzles me why they went to the bother in the first place. Needless to say their efforts were rewarded—I like to think I’ve been a good friend over the years, loyal, trustworthy, reliable, etcetera—and it wasn’t forced but now that they’ve all dwindled away, all those in the real world at least, I don’t find myself pining for their company.

Friendship’s something I’ve never really understood. It is, of course, a form of love and I don’t understand that either but I do believe in love at first sight because I’ve become friends with people at first sight. You simply know you’re going to be mates with that person for years to come. Mostly, though, I find when I’ve become friends with a person and I’ve no idea when or how it happened as has been the case with you. Maybe the Internet serves as a dampener because I’ve never really thought of you as unbearably bright or unbearably anything. You’re eminently bearable. Perhaps that’d change were we to meet in person but I suspect not because we’d both be on best behaviour and the next thing you know we’d bugger off to our old lives.

A sweet man is what you are, Ken. Nice piece of writing today.