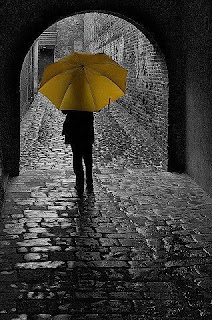 I don’t know if you know but I carry an umbrella almost everywhere I go. It’s not an affectation or anything. I just don’t like getting rained on.

Although I’m not superstitious, I’ve almost come to believe that it is more likely to rain if I do not have my umbrella with me. It is almost, but not quite, evidence of a humorous God above. That he/she would look down, see me venture out without my umbrella, and entice the heavens to open and piss it down upon my head.

I say this to people who ask me why I am toting an umbrella on a patently fine day. A number of people use this as a conversational ploy whenever we meet. “Got the old umbrella? Keeping the rain away?” They smile gently and speak to me like I am four years old, which sometimes seems about right.

My umbrella ‘weapon of choice’ is one of those little black numbers that shoot open when you press the button on the handle. It fits neatly in the front section of my shoulder bag and comes to hand easily when the rains recommence. I go through them though. They are cheap and never last very long. Generally it is a gust of high wind that does for them, turning them inside-out, ripping the fabric and twisting the frame.

Of late, though, the simple old pop-out black number has been hard to find. Perhaps it’s been the wetness of the winter, perhaps some factory in China has had a setback. I don’t know the reason. All I know is, for a time there, I have gone about my business umbrella-less.

And, oh, how the Gods have laughed and made merry. Sheets of rain, vertical and horizontal in turn have assailed me as I go on my way. The country has suffered flooding, the farmers have not enough feed. All because of my lack of an umbrella.

Okay, not really… but I did get wet.

One particularly torrential lunchtime,  a few months ago, I was in my spiritual home, The Linenhall, getting a sandwich. In a cloud burst of inspiration, I asked them if they had any abandoned umbrellas behind the counter and, if so, could I borrow one to get me home? They had quite a few abandoned/lost umbrellas and told me to take my pick and keep it but most of them were too flowery even for me. Only one seemed even slightly passable. A small pop-up one like the kind I normally favour… except it was beige. It was ‘Mum Beige’. You know the colour. Mums have umbrellas that colour. I weighed my options and went with the umbrella. A little reluctantly. It wasn’t me but it was shelter from the storm. I took it and went home and it kept me mostly dry all the way.

I’ll keep it, I thought, just for a couple of days until I can get a nice new black one all of my own.

The umbrella is now completely ruined. The little beige handle at the end kept falling off and I kept screwing it back on until it cracked and refused to stay in place. The retractable shaft no longer fully retracts so the unhandled sharp end sticks out far too far. It looks like I am carrying a menacing sort of a weapon. A beige weapon.

I am a professional person of almost fifty five years of age. I am self employed and do a rather serious and responsible job which carries quite a bit of weight and responsibility. My peers are spinning around town in large cars and wearing nice suits. I, meanwhile, am struggling up the main street, bedraggled in my all weather coat beneath a tattered beige umbrella.

There are a couple of truths attached to this.

The first truth is a) I don’t care. I don’t care much what I look like or what kind of image I project. So long as my flies ain’t undone and my shoes are on the appropriate feet, I kind of feel I’m doing okay. My best attributes are definitely not how I look. I’m kind of funny and fairly sharp. I’ll help you out if I can. These are the kind of things that matter to me. Not how beige my umbrella is.

The second truth is b) I like to hold on to things. I find it hard, bordering on impossible, to let go of things that people have given me. The tattered beige umbrella is a case in point. If I’d bought it, I would have thrown it away by now. But somebody gave it me. It makes it more valuable on some stupid subliminal level that I can’t even understand myself, much less explain it.

I think that second truth holds a key to one of my failings. This way I tend to hold on to things that I have been given. My firm embrace of the Status Quo. Almost all of the more radical changes in my life have been brought about due to external influences. My turns have been necessary reactions to things that have happened. Rarely, if ever, have I thrown down something and picked up something better, while the first something is still clacking along in some half-assed way.

Reading back, that last part has a whiff of dissatisfaction about it but that is totally not the case. I am quite satisfied and happy with my lot. Indeed, I know I am a very, very lucky guy. But it’s good to think about silly things now and again. It’s good to try to reach.

It’s only then that you wonder if you should have thrown the tatty thing in the nearest bin and just allowed yourself to get more wet a little more often.

One of my oldest possessions is an umbrella, a classic, non-folding umbrella that I bought in British Home Stores in East Kilbride some thirty-eight years ago. Black, of course. I’ve owned numerous folding umbrellas over the years and still keep one in my shoulder bag, the one I bought in California some twenty years ago. Like you I’m not one for throwing something out, not if there’s life in it. And Carrie’s the same. Worse even. Once when she was in the States I took it on myself to dispose of a set of kitchen canisters I’d never seen her use and had never used myself and were (or so I believed) nothing more than clutter. Let me tell you I’ve never thrown anything out since. But back to the brolly. I don’t actually use it very often but it pleases me I still have it. Who’d imagine I could get sentimental about an old umbrella? But there you go. So I must’ve been nineteen when I bought it and I remember enjoying the hell out of it. I used to watch old films where men strode around with sticks and canes and never really got what the point of them was. Until I got the brolly. I mean it served no purpose most of the time. If anything if was a hindrance—it wasn’t like a sword I could sheathe—but I, like you, wandered around with it even when the weather was fine. Not just in case, just because.

Once again your words echo my own thoughts. Most if not all of my turns have been a reaction to external influence, rather than me poking my head out from under the tarp and just going for it. I only recently learned to drive, when family circumstances meant that the only way for life to run smoothly meant me being able to get myself and others about easily. I often say that meeting my wife was the making of me and it's true. Most of the great variety of experiences I've had happened once we met. I would have still been knocking about the same streets, in the same clothes, making the same choices in ever decreasing circles had I not ventured out with my cousin one night and found her.

I rarely used an umbrella until I came to the UK, but your reference to Mum umbrellas reminded me of my own mom fighting with my 3 brothers to keep their hands off her various practical black ones. She bought a very expensive fuschia coloured one two rows of ruffles, thinking they'd be unlikely to knick it. She was right. That umbrella still sits in her umbrella stand. I haven't the heart to remove it even though she died a few years ago and it is probably rotten. When I arrived in 97, I learned how important umbrellas were in a country where personal cars are not the primary mode of transportation for most people. I also learned why most of the practical bags had an outside pocket with eyelets built in for drainage. My mother was superstitious about opening umbrellas in the house, but there always seemed to be one draining open in the bathtub, which, apparently, was a superstition-free zone. I also find it hard to throw away practical things. These days it's impossible to use an umbrella because I generally carry two walking sticks when I'm out on my own. But I still have two or three tiny umbrellas, a couple of which have been rendered unsightly by being wind whipped. You never know when a guest might need one to carry away with them. Notice how I have carefully avoided responding to Jim's comments about his errant disposal of a nearly brand new set of canisters which were all full of the contents which their decorative labels proclaimed. And a matching french press. And yet there are several re-purposed biscuit tins in various stages of indentedness still occupying space on those same shelves.