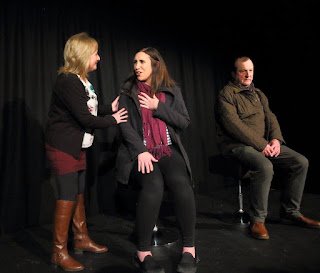 Drama Season is over now, for another year.

It’s time to stop and breathe.

It seems an arrogance to even suggest that there is a ‘Drama Season’. A presumption of something that one shouldn’t presume. Certainly, there is no guarantee that Drama Season will ever come again. It is not like Easter, its annual arrival is not inevitable. But the last number of years have followed a pattern for me and, lucky as I know I am, the months between Christmas and Easter have been my Drama Season.

And it is over now. Time to look back.

This was the sixth year of The Claremorris Fringe Festival, the sixth year I entered, the sixth year I got in. Upon hearing they would have me and my anonymously-submitted script again this year, I did what I always do. I quietly delivered the script of ‘I Bet You Say That to All the Boys’ to my three partners-in-crime in Drama and then ran away before they saw me. Donna Ruane, Tara Niland, Eamon Smith and myself. For all of the six years, these three actors have formed the cohort that brought the plays to stage. We have had one first and two second places over those years and this year's was one of the seconds. The guys were brilliant and gave a great performance, Tara and Eamon picking up a well-deserved acting nod along the way.

This little play was a bit unusual for me in that I felt I was at least trying to react in some way to the world I find myself living in rather than simply playing within it. The husband in the play literally speak for his wife, telling her how to feel and what to say. In these days when women seem more visibly oppressed than ever and also seem to rail more actively against this wrong, I felt I should look to my own game. I’ve been trying to do that this year, as my own tiny and personal response to the ills I see. Am I without sin? Can I throw the stone? No, I certainly can not. Being almost fifty five years old, I have grown up in a world where prejudice has subtly flavoured everything. It was, to my mind, almost more of a naïve prejudice than a malicious one. We stared at the very few black people who crossed our paths, we cheered as Benny Hill ogled another band of women and couldn’t wait until next Tuesday, when he would do it all again. Such things leave a hue on our souls that is hard to wash away. For my own part, when I stop and look hard at myself, I can see things I do that are not as good as they could be, things that are embedded in me. I can’t change the world but I can change myself. The play was at least trying to acknowledge a little of that.

The Claremorris audiences are marvellous things. They go in and see a  full length play and then they come through into the Fringe space and watch two more. I hope the Fringe continues to go from strength to strength. As a writer, it gives me a bar to try to pull my chin above. It builds my confidence and skill. It encourages me to create something new.

I may never be a part of Claremorris Fringe again but it has been a part of me and, for that, I am grateful.

Then came the Teenage Play.

Then, over Christmas, I did some thinking. I thought about the last two productions of my plays, over the last two years, ‘Midnight in the Theatre of Blood’ and last year’s ‘Deb’s Night’ and I knew I would be missing out if I couldn’t get to do it all again this year. And so, ‘The Colour of Red’ was born. Derived from a radio play I wrote for St Patrick’s Drama Group in Westport about fifteen years ago, called ‘A Place in Between’. The play went on to be shortlisted for the PJ O’Connor Award and then lay dormant as radio plays can do. Another radio play of mine ‘Conception, Pregnancy and Bert’ had been revived as a theatre play by Oisin Heraghty and toured the national one act festivals. Since then it has found a life of its own with theatre groups in various parts of the West of Ireland. Why could ‘A Place in Between’ not do the same?

A ‘significant rewrite’ was done to make the material more suited to the young cast of Donna’s brilliant ‘Acting for Fun’ group. Then, like the Claremorris play, it was dropped in a letterbox and the poster scurried away to await the verdict.

The verdict (never predictable) was positive and ‘The Colour of Red’ became a real life thing all in its own right.

And, this week, it went on, in two marvellous performances at The Linenhall Theatre in Castlebar. Two real and unequivocal nights of theatre, coloured in and textured by the production work of Oisin Heraghty, who calmly and unflappably ran each show while I flapped about enough for both of us.

Two wonderful nights. The culmination of months of hard work and preparation. Thanks to Orla and Maura and everyone at The Linenhall Arts Centre who give us their splendid theatrical facility and who allow us to play with it.

I am so proud of the cast. They were brilliant without exception and they continued a tradition of excellence in acting derived from Donna Ruane’s mentoring and care.

I was delighted, also, to see my own son, Sam, step into his third production of one of my plays and do us both very proud in the process.

These productions, from rehearsal to execution, are tailor-made golden memories for me. Often, we can’t tell what will become a treasured moment in our lives until years after the event but these times, particularly the performance days, are heightened fulfilling experiences that I know will warm my heart for as long as memory stays.

And now the stage is bare and the blank page faces me once more.

Oddly enough, for all the productions and acting and performances, this is the moment where I finally realise that I may be a writer.

Because the blank page holds no fear for me.

There, deep in its cell structure, lies a world of endless possibilities. A land where anything can happen and probably will.

Earlier this week, when the plays were done, I scribbled a note to myself and laid it face down on my desk.

An arrogant mission statement of what I propose to do next. It may not work. It may not even be possible. But I am emboldened now by Drama Season and I’m going to give it my best shot. 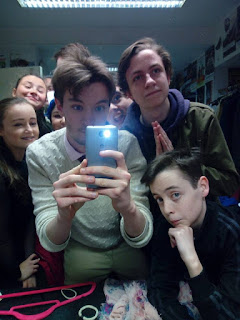 So you’re a writer, eh? And here I thought you were nothing more than a haverer. Or maybe they’re the same thing. I wonder how many books it took for Stephen King to decide he was a Writer. It’s like being called a man. Do you remember the first time someone referred to you as a man? I was about fifteen and I knocked on some woman’s door only to be met by a kid of about three or four. “Is your mum in?” I asked and he breenged off down the hall, “Maaaaaam! There’s a man at the door.” God that did me good. You’d think all it would take would be publication especially once you get paid—I still have the stub off the first (and, to the honest, one of the few) cheques I ever got—but that glow fades all too quickly. I know with some writers it’s family that holds them back. They want those who matter to them to think of them as a writer. “Oh, you remember our Jimmy. He’s a writer now. Doing very well. Three poems this month. Made a whole fiver.” My wife, I’ve noted, has never had any problems referring to herself as writer and in public and if I’m there she ropes me in, “We’re writers.” Why does that embarrass me so? And it does I have to admit. I’m not ashamed of my work but I’ve got used to people not quite knowing how to deal with the fact. They’d cope better if I said I was into extreme pogo (yes, it’s a thing).

Success—the little ones and the middling ones (never had a big one)—helps and so I’m dead pleased for you. (Odd expression when you think of it.) I got the link to the wee video you posted. I’d seen it before. I was really hoping for a clip or two from something else, even just rehearsals. You should maybe think of that next time round. I assume you’ve got a one of those new-fangled smartphones. Or, if not you, one of the kids.