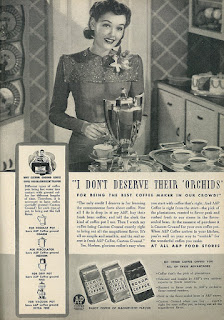 I was watching Louis Theroux on BBC2 last weekend. He was interviewing people who suffer terribly with eating disorders. I thought it was a sensitive and quite revealing programme. I would have to confess that eating disorders would be something of a mystery to me. In that respect, the programme made me think a little more clearly about the subject.

One interviewee was particularly clear in explaining that the problem, for her at least, was nothing at all to do with body image or the need to be a ‘size zero’. Her testimony along with others, painted a different picture altogether. One where the pain of virtual starvation is almost a welcome release from all the other pains in the world. One where the person suffering feels they actually don’t deserve to eat.

That last bit hit home with me on rather a personal level. The woman being interviewed quietly expressed the sentiment in two repeated words. ‘Don’t deserve. Don’t deserve’ and…

Wait. Stop. This is where I make the whole thing about me and what those words mean to me. But that just doesn’t feel right. My heart went out to the people in the programme, the mountain they are struggling to climb every day. It shouldn’t become about me. Lucky me, who has no illness or disorder to contend with. I shouldn’t even go there.

But then again, maybe I should. Empathy is a powerful weapon in battling things. I think so anyway. Perhaps, if something evokes empathy in us and makes us acknowledge that we feel even a micro-fraction of what the person suffering feels, perhaps the exploration of that can have some value too.

Who knows? Either way, here I go. Talking about myself yet again now.

When that person repeated the phrase ‘Don’t Deserve’ to herself on my telly, I immediately realised that this is a thing I sub-consciously say to myself all of the time. It doesn’t manifest itself in me in the form of any palpable discomfort or pain. It is just simply a way of looking at things. ‘Don’t Deserve’.

And I’m not mentioning it here by way of some confessional or anything. I sometimes think of myself as a sort of an ‘emotional everyman’. I reckon that, if I’m thinking or feeling something, you can bet that lots of other run-of-the-mill folk like me are probably thinking it too. That’s why I debated with myself about scribbling this thing, decided against it, and then, somewhere along the way, evidently changed my mind because, well, here I am.

Whatever it is, whatever it might be, I don’t deserve it.

I think, on one level, it’s quite easily explained. I think I have a sort of a general loose ‘socialist’ outlook on things. I have so much ‘Stuff’, you know? ‘Stuff’, food, shelter, entertainment, warmth, clean water, family, freedom… so very much stuff and so many people in the world have so very much less. So many people have nothing at all or less than nothing at all. So how could I not feel that I don’t deserve anything more? I’ve got my share already, much more than my share. And not just of things or comforts but of luck and love and those even greater things that are harder to quantify.

So that’s it sorted then. I sometimes feel I don’t deserve things but why the hell wouldn’t I when the world is an uneven as it is and when I sit so near to the top of the pile.

Except that doesn’t answer all of it. Not really. It’s a bit more complicated than that, isn’t it? Because it isn’t just about material things. It’s also about more obtuse, difficult to pin down, things such as personal achievement and creative satisfaction. To have these type of things for oneself is not to deprive anyone else of anything at all. They are purely personal. And yet that sub conscious part of me will still mutter that I don’t deserve them, any of them.

The amateur psychologists all step up. “Easy,” they say, “this lad has a tiny little inferiority complex that he’s nurturing in there.” Except I don’t. Nuh huh. In my mind and to my mind, I am pretty damn good. I am actually one of the best at the stuff that I do. I don’t ever feel much inferiority to anyone or anything. More often than not, I feel exactly equal. And, truth to tell, in those choice few things that I work very hard at, I feel a damn sight better than most people.

So what is it then? This ‘Don’t Deserve’ thing.

Well, I don’t know. Do I? I’m only mentioning it in case some of you have it too and think you’re the only ones in the world who do. I bet you’re not… well, I know you’re not.

In my own case, I could easily tease out several other contributing factors but that’s not a job for here. As I said at the start, this is not a confessional, it’s more of a public service alert that lots of people probably feel this way and if you do you're not on your own.

One positive in it is that it might just give me a small key to unlock a greater understanding of those people who have it much worse than I do. That’s something, right?

And usually, at the end of a post like this, there’d be some kind of inspirational resolution. A statement of intent to do better, to give yourself more of a chance. To take a deeper plunge. To have a little bit more bloody faith in your own worth.

Not in this one though. Not today.

I don’t deserve it.

Post Script – Except I probably need to try to do better. If only out of respect for the people who think this way every day except a thousand times worse than I do. There’s a play on in Dublin at the end of the month that I’d quite like to see. It’s a lot of trouble to get there and back, an awful lot of hassle. I don’t think it’s really worth all that trouble for just me to get to see a play. If there were a few others interested it might be worthwhile but it’s just me and I don’t think I should_

Beautiful writing. Thank you for taking the risk to share this with the world. I am all too familiar with the concept. It has had a devastating effect on those near and dear to me. Check out “imposter syndrome” and Amy Cuddy’s talks/ writings on the subject. Although some may not agree with her methods, Amy Cuddy has changed my life for the better.

Thanks Roberta. I will do that. K

You deserve only good things Ken & as you say you've mostly CRACKED IT!

Thanks, mate. 'Might put that on the old headstone. Mostly Cracked It... Not Bad. x

I’ve never known anyone with an eating disorder. For most of my life I’ve eaten whatever I wanted and burned it off quickly. It was only when I quit work I started to put on weight although a major contributory factor was the pills the doc had me on and once I weaned myself off them, and with a bit of effort, I got back down to a healthy (for me) 13st and that’s continued to be my target weight. I can’t eat anything I want now—seriously, if I look at a cake I put on a pound—but the real problem is making sure what I do eat is good for me. Occasionally I want to say, “To hell with it,” but I really hated being overweight—at my heaviest I was 14st 5lb—and I don’t want to go back there.

I remember seeing a programme about Lena Zavaroni in the late nineties and it was heart-breaking. She died in 1999 at the age of only thirty-five having suffered from anorexia nervosa since she was thirteen. The programme showed her shambling about her flat and, honestly, she looked like a concentration camp survivor. I honestly don’t shock easily but those images really got to me and stayed with me.

As far as deservingness goes, yeah, I could go to town on that topic. Mostly the times I have to face it are when selfishness is involved. I struggle being selfish and have never really understood people who simply do what they want when they want. I’ve never got people who kept buying stuff even when they knew they couldn’t afford it. I can afford it but if I spend ten quid on myself it’s as much. And that’s not ten quid a week or even a month. Don’t I deserve nice things? I suppose so but things haven’t mattered very much to me in quite a while.

The problem with self-worth or self-esteem, terms which are more familiar that ‘deservingness’, is we know the truth about ourselves, every dark secret from dusty grey to satanic black. We don’t know what’s inside anyone else but being the generous souls we are we assume—why, I haven’t the foggiest—that everyone is better than us, kinder than us, more decent than us. I mean they’d have to be because look at how they behave! As if the world owes them a living. Why don’t we realise there are people out there who’re less sensitive than we are or are better at hiding their flaws? And that’s all it is.

I think the day that dawned on me was when I met a guy I’d known at school and he’d been a right pillock and now he was a school teacher. And I thought, Hey, maybe some of the teachers I had at school were secret pillocks too. Because they probably were. That really cut them down to size.