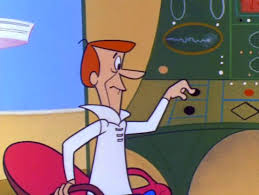 When I was little, I watched that cartoon ‘The Jetsons’ on our telly. It wasn’t my absolute cartoon of choice. From memory, my great faves of the time included things like ‘Hong Kong Phooey’ and ‘The Hair Bear Bunch’. So, no, ‘The Jetsons’ was by no means on top of my list but, still, it’s ‘The Jetsons’ I’m thinking about today.

Because I don’t have a ‘Hong Kong Phooey’ wound or even a ‘Hair Bear Bunch’ malady (I shudder to imagine what such a thing might even constitute).

I have a Jetson injury.

Do you remember ‘The Jetsons’ at all? In the quite likely event that you don’t, George Jetson lived in a technology-ridden future with his futuristic family. His life was populated with flying cars and sundry domestic time saving devices. For his job, he pressed a button. That was it. And therein lies the rub, the button-pressing job. How impossible it seemed, back in the sixties, that some future man could have a job that consisted largely of pressing buttons. How very silly.

And yet here I am, the button-pressing man. Well, not quite but almost. I spend many hours a day on one of my computers, doing either one thing or another, clicking and pressing, pressing and clicking. The Jetsons future est arrivé, albeit sans la voiture volante.

The most ludicrous thing about George’s button pressing job was the injury he would suffer as a result of it. His poor finger would swell and throb. Oh, how we laughed at George and his silly sore finger.

After a very intense period, which involved many weeks of continuous computer work, especially mouse-clicking, I have developed my very own version of George Jetson’s dreaded ‘Button Finger’. My version is, apparently, sometimes called ‘trigger finger’. My right index finger is constantly sore, especially if I try to bend it. Most fun of all though is that, when the finger is dormant, like when I’m asleep, it closes up into a trigger-pulling posture and locks there. The only way to unlock it is to grab the finger with my left hand and tug it back into shape. Whenever I’m doing this, I remind myself of Inspector Kemp from ‘Young Frankenstein’ with his errant wooden arm which also required constant forceful rearrangement to keep it in check.

Technology is bad. But, hey, technology can be good too.

One of my current favourite things is my Sky TV remote control. (Nope, 'not being sponsored by anyone, I swear). I simply adore buzzing through the adverts on any given programme. It’s come to the point where I hardly ever see TV adverts anymore, except as a rapid frame blur as I race to the next part of my show. (Somebody should devise a super-slow visual advert that plays to the fast forwarding generation… there’s an idea!). These days, if I’m keen to watch something on commercial telly that, say, starts at nine, I will set it to record and start watching at 9.15, buzz through the adverts and finish just as the live programme is finishing. I bloody love it!

In this house, we tend to race through the ads at 30x speed and are required to come back to the programme at the exact moment that the adverts or over. It calls for no small measure of skill. On our couch, we compliment each other on our fast forwarding skills. “Oh, nicely done,” we’ll say or, “check out the Maestro,” as the remote control commander of the hour steers us safely and at high speed to the other side of another commercial chasm. My own secret is that I bring the speed back to 12x as I approach the end of the ad break, to give myself a better chance of landing neatly. To overrun is to bring down gentle derision or, ever worse, stony silence upon one’s head.

We may not have a flying car and we may have the injury but, by golly, we can sure buzz the adverts and that’s a wonderful thing. So shall it always be with technology. The joy coupled with the pain. The laughter married with with the occasional tear...

The remote control giveth and the mouse pad taketh away.

I remember The Jetsons the first time round, i.e. 1962 – 1963. They weren’t my favourite of the Hanna-Barbera cartoons. That honour would have to go to The Flintstones followed closely by Yogi Bear although I’d watch anything and everything there being only two channels. The two channel thing could be a problem because you had to choose: ITV or BBC. The only major conflict I can recall came in 1968 with the arrival of Magpie, a slightly racier version of Blue Peter: Sue Stranks didn’t wear a bra; you’d never catch Valerie Singleton sans foundationwear.

I work on four different machines during the day and each has a different pointing device: the PC has a mouse; the laptop in the office, a trackball; the laptop in the living room, a trackball with a scrolling wheel (could never get the hang of the touchpad) and the tablet has a stylus so I’m always switching back and forth and yet my hand still hurts. Strangely it’s the stylus that causes me the most discomfort and it’s my ring ringer that’s the sorest because of the way I let the stylus rest across the nail. I had the same problem when I was at school and the nail on that finger ended up with a literal dent in it because of the odd way I held my pencil. I don’t remember anyone teaching me to hold a pencil; I was just given one, left to work it out and that’s the solution I came up with.

We don’t have Sky but I don’t suppose our remote differs much from yours. I hardly know what any of the buttons do and I couldn’t care less. I also record everything. The only live TV we ever watch any more consists of Doctor Who and Strictly Come Dancing and they’re also set to tape just in case which is just as well because our sound went wonky at the end of Doctor Who on Saturday and all we did was jump to the recorded version, rewind and replay. Easy peasy.

So this is the future, eh? No flying cars, no tinfoil onesies. And we’re only just starting to talk about so-called “smart homes.” When I see programmes talking about fridges that do the ordering for you I can’t help thinking of those ads from the 1950s talking about the latest time-saving mod cons. Still no robot butlers and even the word “robot” has been downgraded. If I can’t have a conversation with my toaster it’s not a robot, period.