War Horse – From the Theatre, Through the Big Screen, and Back Again 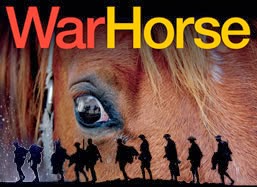 I rarely get the urge to write reviews of stuff these days. I have to love something very much or else I have to be divided in myself about how much I actually like something.

Last Thursday evening, ‘War Horse’ was transmitted live from The New London Theatre to loads of cinemas all over the place. One of the places happened to be our local Multiplex here in Castlebar. Trish and I went along with a medium Coke and a large bag of Maltesers to share.

I have wanted to see War Horse for the longest time. The snippets of visuals and stills I have seen here and there had made me highly curious, particularly about the production and the staging. The touring production arrives in Dublin next month for a lengthy run but, for various reasons (money) I didn’t think I’d be able to get to see it in the good seats I know I would require. So this cinema-showing suited me just fine. I saw Frankenstein in this way on Paddy’s Day two years ago (that probably means it was actually three years ago but hey-ho) and I thought it was bloody magnificent.

So, what about War Horse, Ken, now that you’ve finally seen it? What do you reckon mate? Eh? Eh?

I liked it. I liked it very much. I have reservations, which is why I’m driven to scribble about it but I did like it a lot.

The horses are puppets, as you all know. And the puppeteers, as you may also know, hide in plain sight. Dressed in full character costume, they ‘work' the horse with evident focus and physical exertion. At first they seem obtrusive and obvious there on the stage but, as the story unfolds, they ‘become’ the horse and the horse ‘becomes’ them. It is quite an extraordinary thing and it is, I believe, the reason that people come back to see ‘War Horse’ time and again, even if they do not realise it.

You see, the puppeteers don’t just operate the horse. They are the horse. When the central character addresses his beloved Joey, the puppeteers do not so much try to make the puppet respond. They are right there themselves responding on behalf of the puppet. Not only are they moving a horse puppet, they are the personality of the horse. They snort and screech and bellow. They show impassiveness and fear and anger as required. We the audience see the horse created by this amazing melding of puppet and puppeteer and the result is simply astonishing. I would gladly go back to see that symbiosis happen again and I am sure I would be equally fascinated by it.

In truth, I would now like to go to Dublin and sit in the front row and see it in that way for myself. I would like to smell the sweat that must come from the performance, feel the horses hot breath on my face, and be lathered with the snot and saliva that emanates from those symbiotic animals on that stage. I know, ew, right?

That was the limit of the cinema screening of the play. What was missing was the sense of being locked in the room with these enormous animals. The actual ‘feeling’ of them rather than simply the ‘seeing’.

There were other good things too. The singing fitted perfectly and was beautifully performed. The staging was imaginative and the ‘torn paper’ theme simple and extremely telling and memorable.

Great.  What didn’t you like, Ken? Tell us that.

Right. The story. The story is on-the-nose and not really novel enough to be engaging on its own. Things seem borrowed and derived from elsewhere. When the sergeant tells how he is not an officer and that he actually works for a living, we feel we’ve heard it before, even if we don’t know where. Also there are moments such as white flags of truce across the trenches which, dare I say it, almost feel clichéd.

There is that curious matter of threat too. For me, the first act works better than the second. The first act contains a simple threat which engages the audience well. ‘The hero will lose his horse unless he can…’ It’s only a small thing but it engages our storytelling requirement for obstacles and hurdles. Curiously then the second act seems almost threat free even though the entire world at war stands between the hero and his horse.

Thinking about it, I reckon the threat in act two was simply too large for we the audience to grasp hold of. We needed something human and bite sized to engage with, like we had before the interval, and it just wasn’t there for us. There was spectacle and horror and friendship aplenty but there was also this lack of human-scaled challenge and that gap was populated by a line of characters who did not seem bridled to the narrative in any meaningful way.

The horses were the undoubted star. In an interval discussion, one of the directors indicated that they had been specifically looking for a project where they could work with Handsprung, the South African puppeteers. This makes perfect sense to me. The show starts and finishes with those guys and their creations. There is one moving scene in the play where a horse dies and the puppeteers gently abandon the horse puppet, rather like a soul leaving a body. Therein lies the truth of the matter. Those guys are the soul of the whole thing.

So that’s it, in a nutshell. A flawed story, brilliantly played and extraordinarily well produced. It was those horses, though, and the people who stood beside them and in front of them and beneath them. They were the ones who made it all so wonderful.

Oh and the goose was great too… obviously.

I’ve not read the book, seen the film adaptation nor can I ever imagine myself seeing the play. I’ve nothing against Michael Morpurgo—I’ve seen him interviewed and he seems a decent enough guy—but nothing about this story has ever called out to me. The horse puppet appeared on breakfast TV a few weeks back and it was cleverly done but—and I feel this way about Gravity—there does need to be a story there. Trouble is, most stories have been told and it’s virtually impossible to watch anything without ticking off the tropes. Which can be fun in itself. What you want to see is something that subverts your expectations. Which brings me to last night’s Castle. Now Castle is a show I have often derided for being clichéd and formulaic but last night’s episode—it’s 100th—looked as if it was going to hit an all-time low, a… let’s just call it a homage to Hitchcock’s Rear Window (which aired on April 1st last year—yes, I know we’re behind)… and its climax completely pulled the rug from under me. This is a show that survives on its personality, not the quality of the storylines and yet, somehow, God alone knows how, they got their ducks in a row and I was delighted. So rare. I watched Star Trek Into Darkness when it came out and I cannot pretend for a minute that I wasn’t thoroughly entertained for every single minute but I’m not daft; I realised that a lot of the stuff was being done purely for effect. For example, at the start of the film why is the Enterprise under water? Because it looks so cool coming out of the water. That’s why. I’m not sure what the last film I watched that I wasn’t disappointed by in some way. I guess I’m just a very fussy viewer. I try not to build up my expectations. That’s the best way. I remember when Tim Burton’s first Batman film came out. I had been reading about this film for years and there was no way it could possibly live up to a) the hype or b) my expectations. Which spoiled a great film for me. I subscribe to SFX--have done for years now--but I’m careful what I read. I tend just to look at the pictures if it’s something I’m keen on. One film where I think the balance works is Robot & Frank. Forget I, Robot. No fancy effects. Just a wee dumpy robot and an old guy who’s losing his memory. Wonderful!