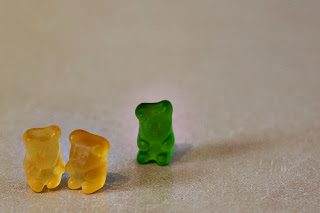 So I was driving along, one day recently, and there was this discussion on the radio about Facebook. I was only half listening to it but I did hear enough to distractedly remark to myself about how sexist it all sounded.

Basically, the person on the radio was saying that people should beware of Facebook because it can cause Envy in some people. Particularly, the person said, in women who see their friends in enviable situations such as steady relationships, married-with-children, nice houses… all that jazz.

Like I said, it all sounded a bit condescending and, yes, sexist to me so I switched over to some classical music station and let it go.

The discussion came bouncing back into my head a few days later. This would be a better piece if I had some neat inciting incident which caused me to revisit the discussion but there wasn’t anything like that. It just reappeared.

What it was, though, was a kind of a little epiphany. A very little one but, still, we take them where we find them, don’t we?

“That’s me,” I thought, suddenly, out of nowhere, “that’s me. I’m like the housewife, the single lady, all those sexist simplistic stereotypes. I Have Envy.”

That was it. I had never thought of it before I had heard that silly radio discussion and suddenly I just knew it was true. The rather-sexist radio person had a point after all. His point was about me. I suffer from Envy.

It’s a silly thing. An embarrassing thing to admit, in truth, but if I don’t push for some modicum of truth now and again, what the hell am I doing here? So, yes, Envy, me, I suffer.

What, then, Ken, what do you Envy?

I Envy the writers.

On Twitter and also, to a lesser extent on Facebook, I follow/friend/whatever a considerable number of professional writers. I’ve always loved to watch them write, virtually, across the Social Media Interface. I’ve learned stuff from them too, about productivity and procrastination and just the business of writing. It’s been great.

But there’s been this subtext, all of my own making, and the silly sexist radio person made me think about it. I Envy them what they have made for themselves. Oh, and let’s not confuse Envy with Begrudgery. The writers I know got there by virtue of their own sweat, talent, and perseverance. They have my respect… and my Envy too.

This is odd. It’s especially odd given that I am a writer myself and, although it’s taken me years to be confident enough to say it of myself, I am a writer. It is doubly-especially odd given the afternoon I had yesterday where one of my theatre plays, ‘Midnight in the Theatre of Blood’ was launched onto the National Stage by a hugely enthusiastic cohort of actors and audience members. As has so-often been the case, I got to see my writing performed and enjoyed and, yes, even celebrated. I am a writer. I’ve had round-and-about ten different theatre plays produced and performed, some of them in a number of different productions, I’ve has a similar number of radio plays, I’ve been on telly and on the radio, I’ve… I could go on. Yet, still with the Envy, Ken? An Envy of writers when you, yourself, are a writer too? How can this be? Where is the sense in it?

The key to it is in one aspect of those Writer’s lives, those ones I follow on my computer. I don’t Envy them their glamour lifestyle or their vast hoards of money, mostly because I know that neither really exist. I don’t Envy them the kudos they receive or the critical acclaim or even the lie-ins they can perhaps have on certain mornings.

Really and truly. I only Envy them in one respect.

I Envy them their time.

They are professional writers. That means they have time that they can legitimately allocate to writing. God, how I Envy them for that. I am a professional… something else, so the writing I do is snatched from the scraps of the day that remain when all other things are done. Those late hours of the night when every other person, and every other concern, is sleeping.

And I get it done. We can’t accept our excuses that there is no time to write. There is always time and I find it because I have to but, golly, it’s hard to bind a piece of writing together when it’s produced in stolen moments. The work itself tends to reflect the time available to create it, short, patchy, intermittent.

I Envy that but I’ll get over it.

I think everybody probably envies something. Don't you?

envy (not begrudgery) can be a great tool to motivate people to achieve great things.

We have no idea what other people have to go through to get their writing done. And when we start to imagine how other writers cope I suppose it’s only human to think they’re all having an easier time of it than we are, that they’re better at it than us. And some of them will be. That’s life. Facebook drains me. Everyone (at least it seems like everyone) is always doing stuff, promoting stuff, meeting people, being enthusiastic and it just wears me down. I wrote a novella at the start of the year. It took me five weeks—which is nothing, I know—and I dutifully posted the news, accepted the dozen (I’m guessing here and probably rounding up) likes, the two or three “well done yous” and that was me. Old news. Next! Nothing lasts for any length of time on Facebook—Warhol’s fifteen minutes has shrunk to fifteen seconds—but the constant drip drip drip never ends. It’s like Chinese water torture! Am I envious though? Yes. I’m fluorescent green with envy of anyone with energy. I have very little stamina. And the bouts of brain fog can be every bit as debilitating. So I’m jealous of anyone, even those who can work for fifty or fifty hours (exactly like I did for years on end) and then have enough left in the tank to come home and write (as I used to do). Of course I suffered from burnout every seven or eight years and probably all these people I’m oh so jealous off are well along that track themselves but not in my mind. In mind they’re all coping just fine and everything is easy peasy for them. Because I don’t know. I only imagine. I believe the hype and the blurb and trust the cheery messages on Facebook.

I envy you. You have plays on the go. You have a book circulating the literary agents and publishers of Ireland and the UK and it’s only a matter of time before you announce that you’ve been picked up by Penguin with an undisclosed six-figure advance and a three book deal. See! I’m jealous of things you’ve not even done. Of course I’d be the first to congratulate you if you did swing a book deal and I’d immediately add “long-time friend of successful author Ken Armstrong” to my bio and change the tagline on my blog to same.

Writers are terrible. On the one hand we want to see who can pee the furthest while on the other we’re looking for rules on how to write properly. We love to see photos of writers’ workspaces thinking: If only I could persuade the wife to let me convert our bedroom into an office like [insert name of favourite author here] and swap our couch for a bed-settee then all my problems would be solved. Ah, yes, if only. I did so much better when I wrote on my own. I’m not saying I hate the company of other writers but they take from me far more than I get in return. But I keep reading their posts on Facebook and liking them and adding witty comments (when I can think of them timeously) all the time wondering what they’re doing on their side of the screen. Probably getting on with their latest novel.

I don’t know if you follow my blogs on McVoices but if not you should have a read at my last one on understanding. I think you might be able to relate.

Thanks Claire. Envy can be destructive too, a double-edged sword to be wielded with care, I think.

Dear Jim, Nobody's got it perfect, we both know that. I guess, if we can squeeze a few words out the imperfection then we're not doing so bad.

And don't imagine that I don't see, in among the wonderful curmudgeonly tone of your comment, your natural generosity of spirit. I do. Thanks. And the blog post you pointed to is excellent.

I envy that you have a well written, well read, and popular blog. I've written for a few years on a blog, but nothing like the amount, or the depth of articles.

I find that the thing about envy is that it's convenient and in a sense lazy. It's easier to envy someone than it is to put in the hard work that so often is needed for these things. I at times envy Leonard Cohen, but he has spent many many years of his life on single songs, he started from nothing and inch by inch worked his way up. Bach said "Anyone that has put the amount of work in that I have can reasonably expect to reach my level of success," and looking at the treatment that Bach got even at his highest level of success there are many un-enviable aspects that we tend to gloss over and ignore.