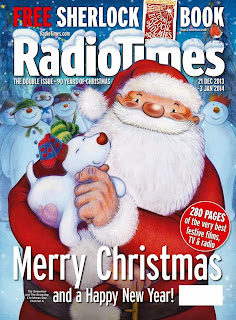 I’ve told you before about how I like Christmas time. In particular, I like that insular, ‘hibernating’, feeling that comes with it, for me at least.

My Christmas is certainly not any kind of social whirl. In fact it’s the exact opposite of that, it’s a rather lengthy ‘quiet time’ and, as it now approaches, I can’t bloody wait for it.

But the devil’s in the details, as they say. So what do I like, specifically, about Christmas time? Well, I like loads and loads of things. When you like something, you often like lots of things about it. But that’s not any kind of answer so here are three random things I like about Christmas.

First up, the Christmas double issue of The Radio Times. I have it here on my desk now, snowmen, snowdogs and Santa all bursting out at me. I’ve been getting the Radio Times ever since I was a boy in Sligo. We were geographically-lucky-enough to get British radio signals which bled over the border from Northern Ireland so the BBC has thankfully always been a part of my life. So, yeah, the double Radio Times has always been a thing for me. Oddly, though, it isn’t so much the thing itself as the promise that it makes.

I got this year’s copy during the week when it appeared on the shop shelf. There was a delight in seeing it. It’s like a good omen, a big fat invitation to a party. Don’t get me wrong, I use it a lot, every day, to see what I should watch and what I should listen to but I don’t tend to read the features or do the quizzes or anything like that. It’s like the opposite of that other magazine… I don’t get it for the articles.

Second up, the afternoon when the Christmas holiday begins. I usually finish work at lunch time on the day before Christmas Eve and I love the afternoon that ensues. There is a falling away of tension, combined with a glorious feeling of a leisurely voyage about to commence. Yum. There is no set routine for how this afternoon goes. One year I spent it wrestling with lights on a tree in the back garden, another year I watched Million Dollar Baby. It’s no particular thing, it’s just a feeling.

Finally, in this short list of random things, the Christmas Day walk. Lots of people do Christmas Day walks and I do the one they do too. The one after the Christmas dinner, with the family, to work off a bit of the grub and to better-appreciate the warmth and dryness of the house when you get back in. That’s a great walk but I don’t mean that one. I mean the second walk I do.

After Doctor Who is over and we’re into the (for me) Strictly Come Dancing dead zone of the evening, I get coated-up again and I walk out and around the town. It’s an ultra, super quiet time of the day, especially here in Ireland where everything is closed on Christmas Day, so I practically have the whole town to myself. Not that I do anything weird with it, I just look around. For an hour or so, I gently pace the deserted streets, nod to the very few people I meet, and just breathe the air. With everybody safely boxed-up in their houses, the whole town has a sort of a ‘parallel dimension’ feel to it. I feel a bit like George Bailey, striding through a world that is his own but yet somehow at the same time is not his own. The most memorable of these walks was three years ago when the whole world froze completely solid. That year, there was nobody at all to nod to. Literally, not a creature was stirring.

And when I get back to the house after this solitary Christmas walk, the place is invariably all the warmer, all the safer, all the more-welcoming.

Then I’ll have a bottle of beer or two and a couple of Cadbury's Roses.

The Radio Times and the TV Times were the only magazines that my parents bought regularly. Mum never read women’s magazines and Dad never read the paper. Occasionally a copy of Exchange and Mart would find its way into the house but that was about it. I personally subscribe to TV&Satellite Week. I like the layout slightly better than any of the other TV papers and now I get it delivered straight to the house every week so I never miss a copy. It arrives on a Tuesday normally (except in the lead up to Christmas when they start to deliver them a bit earlier) and between then and Saturday I’ll sit (usually when we’re watching one of Carrie’s programmes) with my green highlighter and my red pen and I’ll plan out what I’m going to record. We never watch any live TV anymore apart from Doctor Who, Strictly and Atlantis simply because of when it’s on and, of course, breakfast TV. We save up entire series and watch them when the mood takes us. So usually I’m months behind everyone else but I don’t care. I’m only just getting round to watching the last seasons of Dexter and Fringe.

Christmas TV is not what it once was. I know nothing is like it used to be but the one thing I really used to look forward to over Christmas was when they did a run of films by a single director—they did a Woody Allen season one year I remember—but they don’t seem to do that anymore. The only seasonal thing I’m looking forward to is Still Open All Hours. I remember my dad roaring with laughter at the original and I’ve always had a soft spot for the show. Be interesting to see what they do with it. I’m sure it’ll all be done in the best possible taste.

I used to go out for walks over the Christmas / New Year period when I was a kid. I liked wandering the empty streets while everyone else was in celebrating. Now I like to be in the flat and warm. This year we’re exchanging pressies the Sunday before Christmas since my daughter has three lots of Christmas to squeeze in and we really don’t care. So Christmas Day will just be like any other day here only with better TV on in the evening.

Tomorrow I have to go out—unless it’s chucking it down which it is at the moment—and get some new lights for the tree. There’s nowt wrong with the old ones; we’re just bored with them. And I’m to get some new baubles too for the same reason. I do like the tree up and usually it’s up by now. We’re slow this year.

We're a Radio Time's family. It's become a part of our Christmas ritual too. Resembles a child's colouring book by the time we've all finished highlighting or circling the various telly offerings with squeals of delight.

It is quite extraordinary that feeling of stillness that seems fall on this one day of the year.

Have a lovely Christmas.

I love the idea of the Christmas walk...not that I could motivate anyone in our family into trying it. But it doesn't mean I can't try it out myself, now does it?

Sending warm hugs and greetings for you and the ones you love...Merry Christmas!

Jim: I miss those Christmas Movie Seasons too. They were usually late night BBC2. I remember The Marx Brothers and Woody Allen seasons in particular.

Hope: Try it out yourself, Hope, and seasons greetings to you.