Watching Things Get Made 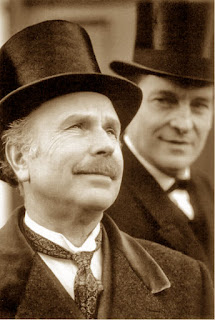 This all started in-or-around 1982 when I was going to college in Dublin and living on Lower Sherrard Street on the Northside of the city.

I went to bed one night, having just walked quite a distance to find a post box so that I could post a letter I had written. Then, when I woke up the next morning, I found, to my grave consternation, that there was a post box right outside my window.

Why had I walked all that way to post a letter when there was a post box practically within arm's reach of my bed? The answer soon became clear. It wasn't a real post box at all, it was a movie post box.

Some time, in the wee small hours of the morning, a large movie crew had set up on my street to film a 1950’s period drama. Yellow lines on the road were covered with sand, fancy old cars were wheeled in and, yes, a convincing post box was set up right outside my bedroom window.

And there, in the middle of it all, was a Movie Star. Actually it was a man I had never seen before but one look at him and there could be no doubt that he was a Movie Star. I was right too, he was or, should I say, he would be. Not quite yet. Not for another few years after his day filming on Lower Sherrard Street on the set for a film called ‘The Country Girls’. Not until he had gone on to do ‘Reilly, Ace of Spies’. But yes, Sam Neill was destined for stardom and I knew it the first moment I saw him on my street.

So that was the first thing I ever really saw filmed and it instilled a bug in me. A few years later I moved to live and work in London and I would often travel around the city to watch bits and pieces of movies and TV being shot. ‘Mission Impossible’ at the old GLC Building, ‘101 Dalmatians’ in the middle of Leicester Square. When I lived in Acton, Arthur Daley’s garage was just around the corner from my flat so there was often a bit of activity there. I enjoyed watching the slow-moving action, the method. I just enjoyed being close to the feel of it all, I guess.

My best story from watching something being filmed happened on a Sunday afternoon in London back in about, ooohh, 1986. I happened upon a film shoot while strolling around and, of all things, they were shouting an episode of Sherlock Holmes, that great one with Jeremy Brett as Holmes. They were filming on the steps down to the South Bank from Westminster Bridge and a nice little crowd had gathered to watch the work being done.

Jeremy Brett wasn’t actually there, as far as I could tell. The scene featured Edward Hardwicke, who made such a wonderfully calm and convincing Watson during his long tenure. In the scene, Watson had to descend the steps, looking perturbed, and retrieve a newspaper from a paper boy who was standing at the bottom of the steps. He had to then study the newspaper headline, look even-more perturbed and march off purposefully. I’ve never seen the episode with this scene in it, I wonder if anyone knows it?

It wasn’t going terribly well, the scene that is. Quite a few takes had been done and the director still didn’t seem happy so he called for another. As a side note, it was interesting to see that the newspapers which the paper boy had were all blank sheets of paper except for the first one which Watson got. Anyway, everything was set for one more take and here came Watson, purposefully rattling down the stone steps to where the paper boy waited.

But he was too forceful. Perhaps the director had asked him to be a little more forceful, who knows? Whatever the reason, Watson pulled the newspaper from the paperboy and ripped it neatly in half.

Everyone stared for a moment.

I should say that I never speak at film shoots, I’m too respectful of the process, but this was too good an opportunity to miss and, after all, the shot was already ruined. Watson was staring at the ripped paper, the paper boy was holding in his giggles, when the duffel-coated guy at the back gently spoke up.

The reason this is such a fond memory for me? That’s easy. Everybody laughed. I love to get a laugh and this was a very good one. On the Sherlock Holmes set, in the drizzle, everybody got a little laugh.

And the next take went much better.

My first wife’s claim to fame is that she once let a door slam by accident in Sidney Devine’s face. Apparently we once drove past a bar in Glasgow into which the Bay City Rollers were entering (so my brother and sister said) but I saw nothing; I suppose I was driving at the time. I did pass Siobhan Redmond in Byres Road once; she looked elegant. And I saw Nigel Havers standing outside a hotel on Argyle Street; he looked like a luvvie. And those are my entire claims to fame unless you count meeting famous people at book signings. I did see a camera crew underneath Glasgow Central once—just a few yards away from where I’d seen Nigel Havers—filming an episode of Taggart I’ve always believed but there was no one famous around at the time.

Like most of us I suppose I am a little fascinated with people who live in the public eye. Would never want to be them. Not for a second. I like my privacy. I find extroverts fascinating in the same way I find women fascinating; they’re just so not me. Which is probably why actresses are doubly fascinating. I’m writing a thing just now where one of the characters expresses his attraction for Christina Ricci and Scarlett Johansson only to be told not to be so stupid as they’d eat him alive. Only I’m going to have to replace Johansson with someone else—Eliza Dushku, perhaps?—because she might read it one day and sue me or something.

I had just taken my seat on an Aer Lingus flight from London to Dublin when I fleetingly noticed someone I thought I recognised off TV coming on board, Roger Cook, the ITV investigative journalist. There was some scandal going on in Ireland at the time (what’s new) and I suppose he and his crew were heading over to do a story.

If you don’t know who I’m taking about, I suppose you could describe him as a larger-than-life character who wasn’t going to be intimidated easily, necessary qualities when you see him confronting some villain or gang on the screen. Seeing only the back of his head for the rest of the flight I started to doubt who I’d seen, so I needed to satisfy my curiosity. I decided that if there was an opportunity I’d go up and ask him.

We landed in Dublin and all those at the front of the plane disembarked first. I saw ‘Roger’ walking off being followed by others. By the time I got to leave my seat he was long gone, or so I thought. As I walked out of the door onto the airplane bridge he was standing there waiting for someone. Here was my fleeting opportunity.

I blurted “Excuse me, are you Peter Cook?”, and immediately realised my horrendous mistake, but before I could correct myself or give some lame excuse he growled back “NO!”

“Ah!” I said, “I was thinking of someone else” and quickly walked away.

By the way Ken, I remember that encounter with Holmes and I think I may have a picture somewhere on slide. I’ll find it some day and send you a copy.