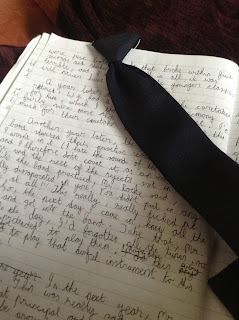 My youngest son, Sam, who is twelve, is finishing Primary School next week. Come September, it will be all-change at Secondary School. This week, his teacher asked the class to write an essay on his feelings about the whole Primary School Experience.

Here, largely untampered-with, is what he wrote.

The first day is always hard. At least that’s what my Mum said. Of course, that wasn’t true in my case. I seemed to be the only one who wasn’t crying.

As my Mum lead me into Junior Infants, Miss Nestor (who would later be known as Mrs Moore) put a sticker on my jumper that said ‘Elliot’. Luckily, it was changed before I met anyone so I’m still known as Sam in the class. My Mum brought me over to Mark, who she said was ‘John Dolan’s brother’. I had no idea who John Dolan was but me and Mark ended up friends anyway.

My Dad frequently gave me the wrong lunch, meaning I had to go down to my brother’s class and swap lunches with him. At the time, John – my brother – was in 4th or 5th class, and they were pretty-much giants in our eyes. Even though I got my lunch quickly, I always dreaded going back there.

I think it was the same year that the ‘Food Dudes’ started. In my opinion, this was the stupidest thing the school ever did. What happened was, every day we’d get little bags full of truly horrible fruit and vegetables and we were given a prize if we ate it. The fruit was all right, I guess. I mean, how can you make fruit taste bad? But the vegetables, Oh my God, the vegetables! I swear they were found in a toilet. And the prizes were not satisfying at all, they were just bobble heads that broke within five seconds and stickers. So, all in all, it was terrible and I truly hope that the younger classes will never have to experience it.

A year later or so Jim, the Caretaker, retired. We had a big leaving ceremony for him, which I thought was really nice. I’m fairly sure most other schools don’t care this much for their Caretaker.

Another year later, the St Patrick’s Day Band started their practice sessions. Of course, I wasn’t in it. I hate the sound of the tin whistle and I therefore don’t count it as an instrument. As me and the rest of the rejects sat in the class while the band practised, Mr Rocke said to us, “I’m really disappointed in you. You didn’t put in any effort at all.” This really, really ticked me off so, the next day, I came in, knew all the tunes, and got in the band. Take that, Mr Rocke! On the day of the parade, I’d forgotten all the tunes again so I just pretended to play. I have done this every time I have had to play that awful instrument. Sorry.

In the next year, Mr  McHale retired. This was really sad because he was a great Principal and, in general, a really nice person to be around. I suppose it was for the best because now I can grow my hair as long as I want and nobody but my Mum complains.

This year, going into 6th Class was great! It’s such a good feeling being the biggest in the school, except for the teachers. So far, 6th is just the same as 5th except you get much more respect and feel much more mature. I really feel ready for Secondary School.

Over the eight years, a lot of classmates have come and gone. Przemek, Sean, Paulo and Daniel have come and stayed. I’d like to take the next few lines as a tribute to our fallen comrades. In memoriam of Olisa, Ibrahim, Mantis, Adam, Ben, Saw and, of course, Fred.

School, in general has been really awesome so thanks to everyone I met along the way. I’ll miss ol’ St Pats but I think I will enjoy Secondary School.

It sounds like you have made some wonderful memories at Primary & I think you will continue to make some quite amazing ones too at Secondary.

I always found the transition from being 'top of the school' to ' bottom of another' felt strange but you'll grow into it & enjoy every moment, I'm sure.

P.S Secondary school have much better school dinners..just in case your Dad messes up again ;

Enjoyed this. Brought back a lot of memories. I’d be interested to hear what your son thinks of Secondary School after his first few days there. I found the transition difficult. I’d gone from being top dog to being a nobody. I literally hid in the cloakroom at playtime on my first day. Took me a long time to adjust. On the whole though my memories of school are amongst my fondest. I was rather sceptical when my father spoke of them as likely to be the happiest days of my life but they probably were. Individual days after stand out—nothing much is going to top the birth of a child—but if I was forced to relive a part of my life I wouldn’t go kicking and screaming through those iron gates. About a year ago I found a site where some kind person had uploaded group photos and a lot of them with names and everything. Ironically the only class that was missing was mine but then I have that photo but it was lovely to see.

Hello Sam, this is a great post mate,
brings back memories of the schooldays I shared with tour Dad. In National School, that's Primary to you, standing in a long concrete yard being divided up like so many sheep into different classes.We struck gold and got Mr Brogan,there was a teacher there nicknamed 'Dickie' an old man who would forget your name or call you out of name, but you couldn't correct him without getting a sore ear, he clipped me once for being in the wrong end of the play ground.I can say knowing Dad as long as I do his sense of humour live strong in you. I do hope you'll post back on your experience of Post Primary .Something tells me you've already got a plan of action there mate. .I've really enjoyed reading this Sam look forward to more? GH

Wow...Sam is ready to take on the world!

(So how did he grow to be this age already?!)

Awwww, that is just lovely.

Your Sam sounds just like my Sam. Same attitude towards school, and by the time he got to year 6, he was the tallest, and most sought after caring boy in the school. I don't know how the education system works in Ireland, but 12 is old for year 6. As mine is born in September, be was nearly a whole year older than his peers (and still is). He was so ready to move on as he had out grown the process and couldn't understand why they didn't teach a wider range of subjects.

You son sounds just wonderful. I like the way he views the world, and his ingenuity towards music, and what a lovely sense of humour he has, coupled with a great sense of himself and his friends.

And shame on you for mixing up the lunches though Ken. Brilliant.

I hope he enjoys the Summer and the new adventure ahead of him.

Well done Sam! Thanks for sharing your last essay in primary school. I loved it! I'm especially happy for you that you are looking forward to secondary-no bother to you! Keep up the good work! I'm looking forward to great things from you.

Such eloquence for one so young, Sam.