Thanks For Dropping By 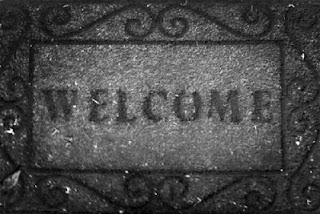 I had a whole blog post planned out for this week, as I usually do. I’ve been writing it in my head over the past few days, as I usually do. All was ‘as normal’ or, at least, as normal as it gets around these here parts. Then I sat down to actually write it, to type it out as I am doing now, and my brain just started talking to me.

“Wait,” my brain said, “this post is going to be really boring, You know that, don’t you?”

“Write something else then.”

So here I am, faced with the proverbial blank page… well, not quite so blank now but still blank enough, and not a clue what I should put on it.

What should I put on it?

Then I thought (not with my brain, obviously), I thought, “why not just say thanks to the people who stop by and have a read now and again?”

So that’s what I’m going to do.

Thanks very much actually. I never say it and I should so now I am… saying it, that is. Thanks.

By coming by here and having a look at my stuff from time to time, you play an important part in the life and general well-being of the blog. You are the blood that keeps the creative heart pumping. I appreciate the time you spend here. You raise me up. All that kind of stuff.

Sometimes I ask myself, would I still write the blog every week if nobody ever came to read it? I’m not sure I know the answer because, thankfully, some people do come. At times, I can convince myself that I would. I can make the case that the blog is a place to loosen up for other writing, to consider some of my thoughts with a little forced clarity, to perhaps leave a more detailed picture of how I ‘am’ in a better way than any photograph will ever do. Yes, I can cheerfully assert, even if none of you ever came by, I would still write the blog.

But would I? Really?

Today, I don’t necessarily think that I would.

There’s a clue, I think, in how I promote the weekly blog post. All I usually do is stick one link on Facebook, one on Google Plus and Tweet about it a few times through the week then whatever will be, will be. Some weeks hardly anyone comes by, other weeks, it gets quite busy. Whatever…

Yes, ‘Whatever’. Except, Ken, what about on those weeks when not so many people come by? Don’t you tend to tweet a few more links than you normally would in those weeks? Eh? Don’t you? Isn’t that some kind of signal that the people who come here to read are more important to you than you often give them credit for? Isn't it just a bit less-fun when fewer people come by?

So, yes, I can brag on about how I’d still be scribbling away here if nobody came to look but I’m not at all sure there’s any truth in it. I hope I don’t get to find out anytime soon because, the truth is, I value your stopping by. It means something to me. And, no, I’m not trying to guilt you into coming around more than you do. Nobody needs to do that. Drop by now and again. ‘Set a spell’, as they used to say on The Beverley Hillbillies.

I may not say ‘thanks’ every time you come by but I’ll say it now and hopefully that will count for something into the future.

Try to visit as often as I can....
Thank you for making it worth the visit xx

I have mixed feelings about readers. Before I started all this blogging malarkey I never gave them much of a thought. If there was someone around to show a poem to when it was done then I showed it to them. And there were times I didn’t bother even when there was someone around. I wrote for me and as long as I was happy with what I’d committed to paper then anything else—and by that I mean eventual publication when I could be arsed getting together a submission—was a bonus. The poems appeared in small press magazines and no one ever wrote me any fan mail. Occasionally—very occasionally, you know how these things go—an editor would scribble something when writing back but mostly when they did it was when they were rejecting something that nearly made the grade; “Maybe try this next time, son.” And then came the Internet and other people and you have no idea—or, again, maybe you have—what it felt like when the first person passed a comment on my blog: feedback from an actual reader. And everything went downhill from there. You see readers were fine in theory but once I started to realise that I had regular readers—calling them fans seems so pretentious—who had expectations then my attitude towards my writing changed. I started second-guessing myself. I started thinking: What will people think?

Would I write my blogs if no one reader them? Well you can look at Google Analytics as well as I can and you know as well as me that despite the number of hits not many people—unless they take speed-reading to a whole different level—actually read our posts. We’re really only writing to maybe a dozen people. But a dozen’s better than nothing. What, as you say, if no one, not one solitary bugger, read our blogs? Nah, I’d do some real writing instead. The blogs are a chore. The blogs are work. The blogs are me pretending to be sociable and conning myself that I’m promoting my real writing. I’m under no illusions about how effective my blog is. I tried to kid myself that I could be this jolly writer guy, make lots of friends and get people to read my books and then self-publishing really took off and nobody out there is waiting with bated breath for anyone to write anything anymore.

Being a playwright you don’t have a physical product to pedal. Maybe thing’ll change for you once you do finish that novel—assuming it’s not finished and doing the rounds of the local agents as we speak. But knowing you if you do get it published it’ll probably be with a real publisher, a big publisher who actually has a decent marketing budget because you’re a jammy bastard like that and have probably written something that people actually want to read, will be made into a film starring Will Smith or at least Will Ferrell (no, I meant Colin Farrell), make you loads of wonga and you’ll forget all about blogs, blogging, blogospheres and all your fellow bloggers who faithfully followed your every word.

Ack, Jim, you made me smile today.'Jammy Bastard' indeed. My novel/thing has greased a few agent's desks already and Will Smith is still blissfully unaware of me. :)

As ever, your honesty and candour stands to you. We are birds-of-a-feather, you and I, in many ways though chalk and cheese in some others. We'll never amount to a whole hill of beans, I guess, but, like RP McMurphy in the Tap Room, at least we will have goddamn tried.

Not sure why you're thanking "us" as it is you who provides us with something that we want to read & something that we willingly return to each week! So, for that, I thank you!
I haven't blogged in two years. I'm always so worried that I haven't got anything interesting to say. If I knew for sure & certain that I'd just be shouting into the ether, I think I'd find it easier but - on the off chance that someone somewhere may actually read what I've written, my nerves get the better of me & that brain organ decrees that whatever I'd write wouldn't pass muster. It's a dichotomy. Keep writing, Ken & we'll keep reading ... & ONE DAY, I may even get brave enough again to do as you do & JUST WRITE! xxx

you're welcome, it's a pleasure, and thank YOU!

I definitely write for an audience, if I didn't get readers I wouldn't write, I especially love feedback. Not so keen on the criticising type, you know the type that people give you because you're out in the public eye and somehow that gives them the right to be abusive to you?

My latest on that was after my review of The Apprentice last week, someone disagreed with my definition of entrepreneur, so then tweeted to everyone how my opinions were prejudiced and baseless. I have no idea where they got that idea from. On second thoughts, I do, they plucked out words from their head that they don't know the meaning of and chucked them towards me as an insult because I didn't want to play their game. Sigh.


Thankfully, those people are vastly outweighed by the people who appreciate my work. The work and art of writing is no easy thing! And that's why I take time (when I have it) to read your blogs, because I appreciate the skill and craftsmanship with which you sculpt words into a work of art.

Plus, I find myself identifying with your stories, but again, that's also due to the way you create pictures so eloquently.

Dear Karen and Claire: Thank you, you are nice. :)

You're very welcome! I think it's great that you give us this stuff for free!

I love the way you write, it's very easy on the eye and your words always seem to leave me enough room in my brain to build the visuals.

Thanks P. Means a lot. x

You're grinning, aren't you? And that's why I come here. Because you make me think, encourage me to laugh, offer a sly wink or make me teary eyed over things people sometimes forget to care about.

As they say in the south, "You're good people." About as grammatically incorrect as it comes, but heartfelt, nonetheless.

Dear Hope: It's possibly a tired old cliche but in this case it's quite true - this means a lot coming from you. Thanks. x