Postcard from the Fringe 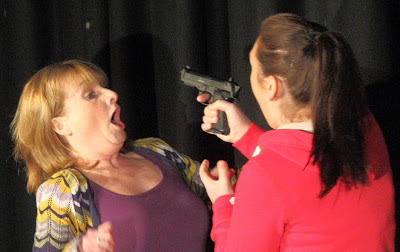 Those of you who are aware of my social media exploits may already know that my newest little play ‘The Doubles Partner’ won the inaugural Claremorris Fringe Theatre Festival on Monday last.

This was a buzz-and-a-half, I can tell you.

Claremorris is a town that knows its Theatre. Every year, for God-knows-how-long, the Claremorris Drama Festival has attracted plays from all over the place and, every year, the town stops and soaks it all up. It’s a great place to come and do a show and now it’s been made even better, mostly by a man called John Corless.

John Corless is a Tiger Tank of a man. A nice Tiger Tank. He is, first and foremost, a Writer and he doesn't like to see writing linger in a desk drawer or shoved down the seat of anybody’s pants (eh?). John was the force behind this Fringe and he birthed it, kicking and screaming, onto the floor of the Dalton Hotel over a long vibrant weekend and the people came and saw that it was good.

And it was good.

John got the whole ‘Fringe’ vibe going. He got the crowd to come down to The Dalton when the main play was over and he fed them drink and loud music to get them into good form for a bit of edgy theatre. He did it well.

One of the requirements of the Fringe was that the plays be brand new. It was also required that they be no longer than fifteen minutes long. That suited me. I like to write 'curt' and you don’t get much more 'curt' than fifteen minutes. From the off, I knew what I wanted to do. I wanted to write a full three act play and then get through it, on stage, in twelve minutes flat. I wanted the end of each of the three acts to present a major reversal in the narrative and I wanted to keep the late-evening audience awake if at all possible. In my view, an almost perfect model of this ‘three act with reversals’ story can be found in Ira Levin’s ‘A Kiss Before Dying’. Each act brings a new perspective, a solid jolt to the established scenario.

I’m pretty sure we carried that off.

I saw ‘we’ and I bloody mean it too. This competition was largely about the writing but, to present the writing of a theatre play, you need to perform it right and to do that you really need the right cast. I was lucky, I knew the right cast. Well, I knew two thirds of them anyway. Donna Ruane and Eamon Smith have been friends of mine for a long time now. Together with Oisin Herraghty, we formed our own little theatre group called KODE (our initials) and we toured some one-act plays around the country to the drama festivals. Donna and Eamon are highly accomplished performers and I wrote my fifteen minutes with them firmly in mind. Donna introduced the third member of the cast, Tara Kelly. Tara has been no less than bloody brilliant. A lovely person in real life, she adopted the ‘cold bitch’ character she needed with worrying ease. I have resolved not to ever piss her off in real life.

Last Monday evening added up to, what was for me at least, a beautiful moment. There is nothing to match it, nothing at all. When you write some little thing and it gets performed as well as you could possibly hope-for and when the audience is engaged and stimulated by it, that’s good, that’s really really good. That’s what happened, for me, on Monday last. Afterwards, I honestly didn't care if I came first or last. We had come and we had given our play as good as we could and it had gone over well with the room. That was it. That was the prize.

But then, to ice the cake, we won the first prize too.

There’s been lots of good fallout from this already. Lots of congrats. I got to talk to Gary Browne on his radio arts show on CRC FM and then I got to go back and talk to him all over again. I even got to read him a blog post or two. Most of all, I got a new play written and performed, I got to do a little theatre with my good friends and I got to entertain people. All things that I love to do. All of this is because one John Corless stuck his head above the parapet and made the Claremorris Fringe Festival a reality. Thanks, John.

I was called upon to make a short speech on the evening, for which I was singularly unprepared. I think I covered most of what I wanted to say but I forgot one big thing and so I’d like to use this post to fix that. It was a privilege to be playing with some of the best writers from the locality and also with some fine writers from much farther afield. I saw a number of the plays over the weekend and reckoned I saw some better writing than mine. I won’t name names though.

Finally, because it was to the front of my mind, I couldn’t let the evening go without publicly dedicating ‘The Doubles Partner’ to my Dad who had passed away exactly one year before on his 80th Birthday. Like me, Dad was a mischievous story teller. I think he would have enjoyed our fun evening in Claremorris as we played our little piece of Theatre for all the good people there.

I think he would have smiled that smile…

Fifteen minutes is a bit on the short side. But I like the idea of cramming three acts into twelve minutes. I’ve just had a look at my dramatic monologue Living Will and at about 6000 words we’re still probably talking about a half hour. Pity. I wrote it for my daughter when she was showing some interest in being an actress but her interest dried up quickly and the thing’s sat in the proverbial drawer ever since. I’m pleased for you though. Shame we can’t get to see your work. That’s what I hate about theatre, its ephemeralness. I’ve whinged before about the fact that great performances are lost. To my mind the BBC should be out there with an outside broadcast unit snapping up these for future generations; it’s part of its damn charter. I keep hearing about these performances down south and I positively drool at the prospect but if I’m not going to travel to Edinburgh to see Patrick Stewart and Ian McKellen in Waiting for Godot what chance is there of me travelling to London to see anything?

Excellent news Ken. I'm looking into giving a play or two to a few local acting groups. After all it's the only way to determine if it works.

Congratulations Ken, to you and all involved. If it was anything like the writing you gift us via your blog, it was a foregone first prize conclusion. :)