Reflections on a Barber’s Chair 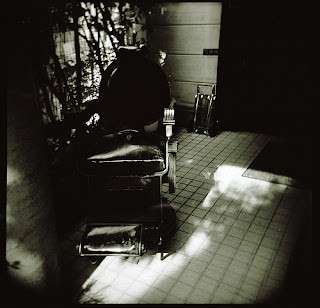 I’m not the kind of guy who tends to linger in front of a mirror. Why the heck would I? It’s not as if it’s Richard Gere looking back out at me.

No no, a quick check that nothing is outlandishly offensive, a terrifyingly fast shave (if such is called-for), a brushing of teeth while gazing everywhere but the mouth and then off out into the day.

That’s why the Barber’s Shop can be a bit of a trial.

Don’t get me wrong, Kieran The Barber is a great guy and I’ve enjoyed going to see him every five weeks for God knows how many years now. I’ve learned a lot from him over those years, I really have.

It’s the mirror, obviously, isn’t it?

I have to sit in front of this enormous mirror while Kieran goes about his good work on my mane. I can glance around the room for a while, I can study (with genuine interest) the grey sheen that now suddenly adorns the clippings on the black sheet that has been draped over me. Incidentally, is there a name for that sheet? I can’t for the life of me think what it is… and why do they need a mirror anyway? The barber doesn’t seem to use it and I certainly don’t want it and-

You see what I’m doing there?

I’m vacillating, I’m putting off the inevitable and using every diversionary technique I can summon in order to do it. I’m trying to avoid the inevitable moment when I have to raise my eyes and look at myself in that mirror.

I don’t think it’s vanity, this avoidance of my own reflection.

“How could it be vanity?” you might well say, “a vain person would be all over himself in that mirror. He’d be loving every minute of it.”

Yes but that’s vanity by someone who has something to be vain about. There’s another kind of vanity too, isn’t there? There’s the vanity of someone who is vain about who he perceives himself to be and who, in his vanity, avoids the truth of himself at all costs…

…hmmm, yes, now that I’ve written that down, I’m starting to think there may be a bit of that reverse vanity in my barbershop behaviour.

Not that I’ve ever been particularly vain or, in truth, ever had anything to be vain about, I haven’t and I’m not.

But there is something…

Here’s the thing. As I walk around, on a day to day basis, chatting to people or just passing along the way. There exists in my head a sort of mental 3D projection of the space that I am occupying in the Universe. It’s quite clear, this image I have of myself.

That’s the trouble with the Barber’s chair. Suddenly, I find myself pinned down beneath the black sheet (what’s it called?), pointed at a mirror, and shown the unavoidably painful truth. And the truth is this. I bear little actual resemblance to that mental avatar who walks the streets daily and greets everyone amicably. This ‘real’ version of me is a bit greyer, a bit saggier, a bit wider and, crucially, a fair bit older than the 3D mental Ken Avatar is.

In my head, I reckon I’m twenty four.

For a time, after some losses, I became older in my head but I’ve sprung back again and there’s no doubt in my mind that my default setting is somewhere about the twenty-four years old mark.

That guy in the mirror? He hasn’t been twenty four in a long long time. He’s fifty, mate, and he’s a darn site more real that you are.

I should get to know him a bit better, this fifty year old Ken. Gaze hard in the mirror a while longer. Spend a little more time in his company.

Twenty four has been and gone.

It’s time to face up to it.

I haven’t been to a barber’s shop in years. Carrie does my hair (and the beard) and a very good job she does of both but I do remember going to the barber’s as a kid. I remember his name, George Black, and I remember the last time I saw him. I passed him on the roundabout near my dad’s early one morning. He was headed on his way to work but not in his barber’s shop—that’d been torn down years before as part of the town’s redevelopment—but probably in some factory in the industrial estate behind where we lived. I never acknowledged him and I’m not sure he recognised me but I felt so guilty when I passed him because it had been years since I’d been in his wee shop. Like most kids in the seventies I’d left the barber of my childhood behind with his bay rum and opted to have my hair done (for three or four times the price) in the unisex salons that were starting to appear.

I remember the first time (first time-ish) that my dad took me. George had two chairs, your standard red chair and a wooden affair with a raised seat for the kids. That was the one I sat in for years, even once I’d started going there on my own but I do remember very clearly the day he said, “No, not that one, Jimmy,” and I got to sit in the grownup seat. And then I abandoned him and a few years later they tore down the block where his shop used to be so it wasn’t me turning my back on him that put him out of business—there were two other barbers in the centre of the town that kept going for years—but I nevertheless felt bad for turning my back on him.

Nowadays I’d be perfectly happy to go to a barber and if Carrie’s ever not up to doing my hair I will now I’m old and sentimental getting.

Wow, thank you Ken. I really needed to read this.
It turned out to be the piece I always wanted to write but never did. When I say 'always', it has been probably just for the last eight or nine years but still...

The existence of that inner-self, this 3-D avatar of myself, was a reflection that was forced upon me during my last tour.

I was touring with younger people, not a lot younger but just enough to make a difference. Or so it should have been.
They got some difficulties to associate the way I behaved and my actual age. I always seemed younger in their eyes.
That perception of me by them mixed with the image I thought I projected of myself made me wonder. It wasn't right. It became rapidly obvious to me that the man who stared back blankly at me in the mirror, every morning, was not the man I thought I was, not even the man I was perceived to be. Well so I thought at the time...

My inner-self is younger. But then again, I never really grew-up and don't really look 40, even my real self doesn't, so that could be understandable. I'm always a bit slimmer and way cooler than I actually look. I have a punkish hair style that is never reflected in any mirror. I smile a lot, with that kind of roguish charm. My face is always the one I had three years earlier...

And of course I know it's not true.
I can imagine what I want, I'm just starting to fit more and more(better and better?) in my real self.
But the real dichotomy for me is that that inner-self is not even my ideal-self. He's not sporty, doesn't have muscles or cool features... He's just not that far off of the mark. Which is the things that doesn't make sense to me. I mean, if you have to misperceive yourself, why being mostly realistic about it?! It confuses me no end...

Anyway, I'm blabbing like an idiot now – surely a sign of ageing ;) – and this blog-post is not about me. It is about you. Or maybe about all of us.

Once again, thank you. I think I'll have a very introspective Sunday, which is good, once in a while.


P-S: I didn't dwell on the 'vain' side of your reflection. I'm an actor. I didn't think I would come across as very honest about vanity. :)

I'm glad this isn't just me. In my mind, I'm still mid-twenties and slim. Thanks to removal of spectacles during trims, I've not had to endure the barber's mirror, which is why I was almost bald on top before I finally surrendered my pony-tail. Now I have to make do with nasal hair for acts of follicle rebellion.

It's 30 years old for me. I'm prettier, thinner, and firmer than the me of today. I used to love going to the hairdressers and positively hate it now, purely because of 'that' mirror (I am vain). I admire lots of actresses older than myself (& older friends); Joanna Lumley, Felicity Kendal, Judi Dench and Maggie Smith for example, I could watch them for hours, their faces are warm, wise and welcoming and make me want to be with them. Why then am I so reticent to let go of my own youthful perception of myself? Age can bring much joy, and no one really chooses to be with someone for their youthful appearance, not deep down. Other qualities are far more important. I hope one day to lose my vanity at the same rate as my youth. Another fabulously thought provoking and honest piece Ken, thank you. :-)