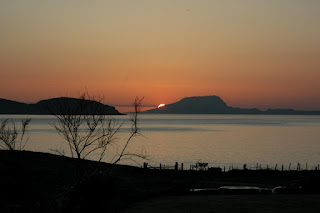 The light was back on again, where it hadn’t been on for months.  Suddenly it glowed once more, orange and unclear in the coastal dusk.

Heike moved the telescope.  She manhandled it away from the main window, the one facing out into the bay, where it was used to study the sea and the stars and the lights that twinkled on as dusk fell over the distant island.

“What are you doing?”  asked Uli, from his favourite chair.


“Ssshhhh,” she told him, “read your book and ssshhhh.”

Despite the protestations of her poor back, she dragged the telescope and tripod into the side conservatory and she set it up so that she could peer at the window in the adjoining house where the light had so recently reappeared.

“If you can see them, then they can see you,” Uli observed, from deep within his book.

But  Heike wasn’t listening.  She had finally fixed the telescope on the upper floor window and she could finally see inside.  But what could she see?  The light was still orange, as if through a shade or a filter, and things were stacked up inside, like rolls of carpet or fabric or_

Nobody lived in the house.  For all the years that they had been coming to their retirement home-away-from-home-by-the-sea, nobody had lived there.  But, sometimes, there had been this light, in the upper floor gable window, glowing out into the night.  No car to deliver a person down the lonely lane to light the light, no other light anywhere else in the house to match it.  Just that one orange glow in the dusk, for a short while, and then gone again until the next time.

Heike realised she wasn’t breathing as she peered deep into the orange room.  She pulled herself away from the eyepiece and forced herself to inhale for a moment.  Through the naked eye, the puzzle of the distant window was now solved, carpets, or fabric, piled up in rolls, but no person, no movement, no hand to light a light.

Perhaps they were smugglers.  The coast below her house was rocky and challenging but a small boat could be landed there by a skilled oarsman and there had been plenty of reports of illicit cargoes intercepted not too much further down along the coast.  Why not here then?  Perhaps the house was a stopping-over-point for ill-gotten goods… like carpets or rolls of mysterious fabric.

She reproached herself.  Mustn’t let her imagination run away with her.  It was probably just the owner of the house who came down intermittently to check that everything was okay, stay an evening and then go away again.

She peered once more into the eyeglass.  Orange light, carpets, no sign of life.

Uli looked up, surprised, “What? Where?”

“I have some of my Tiramisu left.  I’ll put it in the blue bowl and cover it with foil and bring it over, as a welcoming gift,” she nodded decisively, “it will be… neighbourly.”

Uli had been contemplating a small Whiskey.  Nothing fancy, a little Crested Ten perhaps and then bed and eventual sleep to the sound of the waves.  Now it all seemed suddenly rather distant and unattainable.  “Go in the morning, if you must,” he said.

“But the light will be gone by morning, it always is.”

“All the more reason to wait and go then.”

Heike tried the telescope once more.  Nothing had changed.  The smugglers orange light, the carpet cargo, the impending dusk.

She decided, snapped up straight, headed for the fridge, “I’m going.”

“It’s late for us.”  And perhaps therein lay the crux of the matter.

The house was only fifty metres away as the crow flies but to get there on foot was a more substantial proposition.  The driveway down toward the coast had to be negotiated and then onto the lane and back up away from the coast to the entrance to the other house.  It took ten minutes or so to navigate it and the Tiramisu slipped and slided in the blue bowl all the way around.

Uli had presented her with five final words as she stomped out of the back door in her favourite green Wellingtons.

“You are not Miss Marple,” he had said.

The words stayed with her as she tromped her way down towards the sea and her back itched in the exact spot that she knew Uli had the telescope focused on.  What on earth did she think she was doing?  Was she going to single-handedly round up the smugglers in time for the nine o’clock news?  Was that it?

The sea before her was choppy and black.  The lighthouse swept its rotating beam along the island with reassuring regularity and the lights along the far side of the bay were as many as they were going to be all evening.  She walked on.

They had happened upon a Whale, along the shore, earlier in the week.  Dead of course.  A Pilot Whale, Uli had said.  It had been assailed by the gulls and it stank to high heaven.  It wasn’t the smell that had bothered her though.  It was the finality, the suddenness of the finality.  One moment bolting through the black cold waters, the next impaled on a barren shore, life leaking away…

The front door of the neighbour’s house arrived quicker than anticipated.  She had almost expected the front door to be ajar, to creak open as she tapped gently upon it.  But it wasn’t, it was closed and it looked like it had not been opened in the longest of times.  In fact, the whole place looked deserted.  Perhaps that’s the way the smugglers liked it.

She glanced across at her own house and, yes, there was Uli, eye glued to the telescope.  He saw her seeing him and straightened up quickly to beckon her back home.  Come home Miss Marple, come home to the shore.

She turned and raised her fist to the door. A moment’s hesitation and then she knocked.  A hard confident neighbourly knock.  Then she waited, hardly nervous at all.

Was that a movement within?  She couldn’t be sure.  Who would come to the door?  Would it friend or foe, smuggler or aged owner?  What would they have to say to her?

Heike didn’t know and she suddenly realised that was just fine.

She didn’t need to know the answers, not at this very moment.

At this very moment, she was just out in the world asking the questions.

When my curiously gives up the ghost then’ll be the time to lie down and die but not till then. That’s what I took from this. It doesn’t matter what Hayke finds. When Uli says, “It’s late for us,” to my mind he’s talking about more than the time of day; the subtext here is their time of life. For Hayke though questions are her lifeblood. An interesting ending. Can’t pretend I wasn’t a little disappointed not to find out the source of the light but that doesn’t mean the story doesn’t work.

Very nice piece of work, Ken! I was wondering what might happen, and then... well, that was the point, right? To ask questions, to wonder? That there comes a time when we just need to ask questions and whether we get answers or not isn't so important?

Whatever the case, I very much enjoyed this!

Fine story, Ken. We really enjoy it.
By the way, the Tiramisu was made from old eggs, so it was not intended as a friendly gift but as an attack to immobilise and catch the smugglers.

You can't end it there... To me it felt a bit like you'd reached the word count or something. It's a really good build-up though.
x

Jim: I think you got my intention pretty good there. I felt that I had reached the end of the story that I wanted to tell.

Ulrich: I even spelled Tiramisu wrong (I fixed it since). Silly me.

Karen: You are nice, thanks.

Rachel: I like that you would like more, that good news. Not sure if I have any more though. It wasn't a word-count consideration, I promise. :)