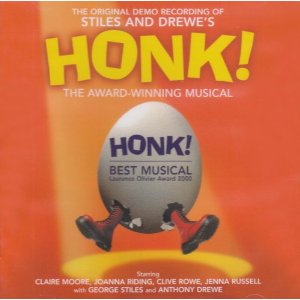 I shouldn’t write when I’m buzzin’.  It never works out well.  Still I’m here… so…

Two of our loveliest schools here in Castlebar, (County Mayo, Ireland) – St. Gerald’s College and St. Joseph’s Secondary School - have joined forces to produce this year’s school musical and I’m just back from seeing it and, yes, I’m buzzin’ so watch out.

‘Honk’ is not a widely-known musical but it has a pedigree.  It won the Olivier Award for Best New Musical in the year 2000 many years after a fledgling version played in Newbury in 1993 (yes ‘fledgling’, I told you I was buzzed… leave me alone!).

Anyway enough with the history already.  ‘Honk’ is a bright, clever, show with a witty, ever-so-slightly-saucy book and a brace of hummable tunes.  It’s also ideally suited for a teen cast to kick to life bearing, as it does, messages of Tolerance, Anti-Bullying, Stranger-Danger and Frog Admiration.

It’s the ‘Ugly Ducking’ story, you got that, right?  There once was an ugly ducking…  It’s well suited for a musical, there’s all the farm animals, waiting anxiously for the hatching of Ida and Drake’s brood, everyone a little curious as to what’s in that big egg right at the back.  What eventually comes out is a bit ‘different’ and the farmyard is not slow to let poor ‘Ugly’ know all about this.  Isolated, starved of attention (and French Bread) Ugly turns in despair to the Cat for friendship but the Cat has other things on his mind.

This is all done with a great big huge cast of super-energetic teens – a boys school and a girls school thrown together and allowed to wear outlandish clothes and belt out huge show tunes… where were you, Mr Director, (Ronan Lardner) when I was young?

Gerry Sheil plays Ugly with a gentle vulnerably – a sort of Clark Kent waiting to learn he is Superman.  I’ve known Gerry a long time and he really threw himself into this.  He fearlessly allows himself to play gawky and naïve in front of his peers and then effortlessly rises to the heights required to carry the finale.  For me, Gerry showed an elusive quality that I sometimes see in the likes of Johnny Depp, a sense of assured restraint.  Listen to me rattle on… I just thought he Aced it.

Katie Rooney, who plays Maureen, has a lovely voice – why did nobody tell me this?  She’s a little underused but she commands attention whenever she’s onstage, particularly when interacting with Ida and, of course, when she’s singing.  Have you heard her sing?  I mean really!

Neil Kernan is a great Cat.  He brings this Bob Fosse quality to the part – he probably doesn’t even bloody know who Bob Fosse is but you do, right?  You remember when he did that ‘snake’ thing in ‘The Little Prince’?  Yeah, that (I know that none of you have a clue what I am talking about and, guess what, I don’t care).  Neil is a great Cat.  Miow.

There’s another great Cat too.  Jane Murray is Queenie the Domesticated Cat and I can’t talk about her too much in case I get arrested.  Queenie, as a character, brings a little ‘edge’ to the piece and when the two cats get together… well…  Changing the subject rapidly, Queenie’s accomplice Lowbutt is played wonderfully by Katie Glynn and she’s got a belting voice and all.

Michael Hall as the Bullfrog is given one of the best parts in the show and he doesn’t miss a single opportunity.  Rasping Durante-like gags and croaking one of the show stopping numbers ‘Warts and All’ he owns the stage while he is on it.  Well done Sir.

I could name loads more, Drake and Jack Daw, Penny and Greylag the Goose but it’s nearly bedtime and we all have to be up in the morning.

So let me name just one more.  Tanita Tolan.  Tanita, as Ida, is simply a Star.  She delivers the emotional payload of the story with consummate ease and she sings like a dream.  People will return to this paragraph in decades to come and cite this as one of the first of her many subsequent glowing reviews.  I don’t mind, I need the page views.  Watch for Tanita though, mark me on this.

A word too for the band.  It’s lovely to see a show with a real live band, it’s a real treat and the guys were great.

I just had a great night.  It’s not just about the show or the music, it’s about growing up and making memories and taking part and bonding in adversity and doing things that scare you and showing yourself boldly to your friends and family.  It’s about the fear before and the buzz afterward, the catcalls from friends down the back, the onstage disasters that the audience never even notice…

… it’s about that frisson, innit?


Look, it’s finishing tomorrow night.  If you’re in Castlebar, you should get your ass up to Breaffy House Arena and see it.  Go on, you can come back and read this again after, I’ll still be here.

Thanks, then, to St. Gerald’s and St. Joseph’s for a grand evening out.

Sounds like it was super, so sad I missed it though. :(