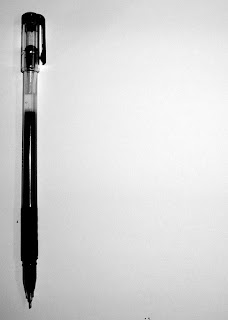 I got nothing for ya this week.

I nearly always write my blog post in the week before I post it.  I reckon it helps to keep the thing reflective of where my mind is in any given week.  Usually it’s finished well-before Sunday comes around, sometimes it’s not.  That’s not a problem.

I’m not normally stuck for something to write about either.  Well, when it’s waffle like this, how could I be?  It’s just, this morning, I got nothing.  As they say on the stage when they forget their lines, “I’m up.”

I have a wee notebook, that's always secreted on my person, where I scribble things in.  I had a look through and there’s some damn fine blog ideas tucked away in there.  Damn fine… You’re going to really enjoy them… I’m just not in the mood to write those particular ones this morning and if I’m not in the mood, they won’t flow and a blog’s gotta flow outta ya, I reckon.


So what do I do?  Faced with the proverbial Blank Page?

Do I leave it for this week and go off and watch Mayo pound Roscommon into the ground (C’mon Mayo!!).  Do I read my book (Sarah Pinborough’s up next… very excited about that) or do I just Goof Off (which I think is a great expression ‘cos we don’t use it this side of the Atlantic and thus it sounds faintly rude).

I have to face this Blank Page down and put some words on it, cos that’s what writers do.  If we wait for it all to mature in our heads, all the nuances to work themselves out and the creative planets to align themselves in our writerly favour, then we don’t get very much done.  More importantly, the good ‘half-ideas’ that we have don’t ever amount to much more than a misquoted hill of mushy peas.

Facing down the Blank Page is an excellent thing to do.  It may start slowly (“All Work anD NO play makes KEN a dull bOy…”) but, before long, you will follow some despairing thought down a rabbit hole and you’ll be off-and-running on some completely random and bullshit escapade which might, one day, actually shape up into something good.  Then again, you might not.  At worst, you are putting yourself in the Zone where Writing can Happen.  Facing down the blank page... if you do it often enough, something will come out of it, that’s for damn sure.

(Check word count)  No, that’s not a Blog Post, you fecker, that’s an extended tweet for Chrissakes… develop the thought…

Come on… come on…

Another good thing about the Blank Page is that it isn’t distracting.  It can actually be quite demanding.  It’s just you and me, babe, and either we can sit here and do nothing or we can ‘Get It On’.  So whaddya say, blank page, you wanna waltz with me a while?”

No. No. No!
You don’t rub shit out on the Blank Page.  You keep going and going regardless.  You can ‘Save As’ later into a file called ‘Marginally Less Shite Than Before’ and feck with it all you want in there but not here.  The Blank Page must be filled up with stuff at all costs.

You can do anything you want on the Blank Page.  What you don’t ever do is print ‘publish’ on the damn thing just after you’ve written it.  That’s just stupid.  Even after you’ve “Saved As’ and tidied it all up, like a muff on a prom night.  You still have to let it breathe for some period of time, even if it’s only thirty minutes (ideally thirty days but it’s a blog, dude, not ‘War and Peace’).  In that brief hiatus (phew) you will see quite a bit of the crap you missed before.  Not all of it but enough to get by on.

It’s okay to fear the Blank Page.  It’s natural.  That doesn’t mean you shouldn’t step up and kick its lily-white ass from time-to-time.

I'm glad you wrote it too. There's a great lesson in here. (I mean besides the fact that people on your side of the pond don't really say goof off.)

The mind of no-mind confronts the snowy fields of nothingness represented by the blank page which in its own turn represents the black slate of consciousness. Sometimes the fact that there are infinite possibilities can be inhibiting. Sometimes having a constriction, even an arbitrary one, can give us the framework necessary, so that we can get on with it. I never get stuck for having something to write about, although I do have days when I don't want to write about Anything. So writing about Nothing is great.

"I have nothing to say and I am saying it and that is poetry as I need it." —John Cage

And some days, the words just go on vacation and leave you behind. Don't even bring home a t-shirt. ;)

'Goof off' isn't dirty. But my brother and his friends had the best time saying 'piss off' for months after seeing Monty Python for the first time. I have said it myself about 3 times my whole life cause it is kind of bad, really.

I wrote a short story a few years back for my daughter called ‘Blank Page’ in which she’s the narrator. A snippet:


“The future,” he began, before pausing for effect no sooner than he’d started, “is like a blank piece of paper and there’s nothing more foreboding that being faced with a white sheet of paper when you’re not sure what you’re expected to say. But who says you’ve got to write anything? You could draw on it, scribble on it, fold it up and put it in your pocket, rip it to shreds or make an origami water bomb out of it. It’s your future – you’re the one who has to live in it when everyone has long run out of remarks to pass about it. Remember that.”

He’s a clever old thing, my dad, and that wisdom rests on a pile of mistakes a mile high. “We learn from our mistakes,” he once told me, “which is why I’m a genius.” He’s not a genius but I do tend to listen when he goes into wise old owl mode.