Stand Up To The Pier 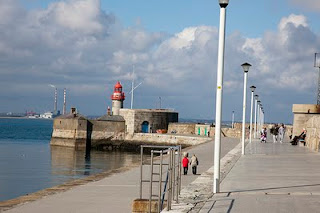 Hide, it’s ‘Experiment’ time...  Quite a few of my online friends are really funny.  I read about their lives-and-stuff on Twitter and on their blogs and I see that some of them are now even making meaningful inroads into performing their own stand-up comedy.

As a result of that, I’ve been thinking a bit about stand-up comedy.  How you don’t just stand up and do it any more than Al Pacino just stands up and says some random lines for his movies.  It all has to be written, worked out, honed.

Stand-up is a type of writing I’ve never tried and I can’t help wondering how it works.  My feeling is that it is largely about Observation – that, as a stand-up writer, you would need to observe, write about it, then cull some workable material from the glut of stuff you would end up writing.  Not all that unlike other writing perhaps.

The other day, I had an hour to spare in Dublin so I went for a walk on Dun Laoghaire Pier.  It was a beautiful morning.  “All right,” I said to myself at the start of this walk, “give yourself a little test.  On this walk on the pier, observe everything with the specific objective of writing a stand-up style blog post about it for next Sunday.

Personally, I view the following post as a failure, an attempt to be funny which largely fails.  That’s okay.  Writing is about 'trying' as much as anything else and, increasingly, I don’t mind showing the little failures as well as the little successes.  Subjectively, I think the telescope bit isn’t too bad… perhaps there’s twenty seconds in that.  The rest?  Meh…
What I've learned from the exercise is that I would have to write an awful lot of words to distill a minute of workable stand up from it.  That's a lesson worth learning, I think.
So heckle me, if you like, I can take it… for the next six hundred words, I am a virtual stand-up.

I had a walk on Dun Laoghaire Pier yesterday.  The ferry was coming in from Wales.  That ferry only goes out twice a day but it always seems to be coming in.  Everytime I’ve ever been there, it’s coming in.  I wave, it doesn’t wave back.  That’s Dublin for you.

And when you come from someplace like Mayo and you hit the Pier on a bright sunny morning, it’s like some kind of a ‘Colossal Assault on the Senses’.  You’ve got the wind in your hair, the sun blinding off the waves, the clink of the laynards on the sailboats, like tiny distant cowbells in the French Alps… the smell of the sea_  wait, no, there isn’t actually any smell of the sea.  How can that be?  Where has the smell of the sea gone from Dun Laoghaire Pier? It’s right there - the actual sea - but there isn’t any sea-smell off it. This is not a Colossal A-Salt on the Senses, it’s a Colossal No-Salt on the Senses.

Everybody’s Exercising out there too, it’s all a bit intimidating.  Nobody’s just walking, like I am, they’re all Exercising.  I decided I’d better Exercise too, just to blend in a bit.  I needed some kind of motivation to walk a bit faster so I spotted this girl about 200 yards up ahead… walking.  I said to myself, “I’ll catch up with her before the end of the pier.”  I gave it all I had… pushed the pace really hard… but she just pulled further away from me all the time… and she wasn’t even trying! I could see her up there chatting to people, tying her shoelace, having a quick cup of tea… Meanwhile I was having a bloody hernia, I couldn’t catch her.  Old folks were passing me, wondering why I was puffing and panting…  When I was half way out the pier, she passed me on her way back in.  I had a good look at her.  She wasn’t worth catching anyway.  I’m virtually over her at this stage.

We get fishermen on our little piers in Mayo.  But they catch things.  Regularly.  The fishermen on Dun Laoghaire pier have all the kit, everything, they’re like the James Bond of fishing tackle… but they never catch anything.  I asked them, “Lads,” I said, “do you, like, catch anything… ever.”  They told me to fuck off, which I generally take as a ‘No’.  I waved goodbye to them but they wouldn’t wave back… ‘cos that’s Dublin for you.

There’s absolutely no dog shit on the pier either, which is also quite different to Mayo.  There’s loads of dogs… dogs of every shape and size.  No shit though, ‘no shit, there’s no shit.  Now you’re probably thinking what I was thinking, the owners all pick up after their dogs.  Well, yes, except I looked and looked and there was no shit bins and I couldn’t see anyone with one of those little sacks of shit dangling off their wrist.  You know the ones- ‘like little smelly orange scrotums.  None.  There was no place on their person either that they might secrete a shit for any meaningful period of time.  So how does it all work?  Are the dogs trained to hold it while they’re out on the pier?  Do they perhaps do it over the side, into the briny sea, confident that the fishermen won’t have the skills necessary to reel any of it back in?  I have no answers.

There was this guy with binoculars, out near the end of the pier, and I could see that he were watching some cool girls in a boat.  I wished I had binoculars.  I had this vision of myself with binoculars – binocular vision.  The girls in the boat looked really nice.  Really distant to the naked eye but nice with it.  I really wanted a look.  There was this telescope, you know one of those pay telescopes like you see on piers.  I put twenty cent in to check out the boat… yeah, the boat.  The guy with the binoculars – he could see it all, he could see the tiny bead of sweat in the boat girl’s décolletage as she vigorously hoisted her jib.  Me?  I could see exactly what I could see without the telescope except reduced to the size of a 20 cent coin.  Why do public pay telescopes always have to be complete shite? And, knowing this, why do we continue to put money in them?  I waved at binocular man and asked him if I could have a go at his.  He told me to fuck off… that’s Dublin for you.

It’s a dangerous pier, Dun Laoghaire pier.  There’s two tiers on it. It’s a two tier pier.  All the best people are on the top tier.  Someday I’m going to make it up there.  I won’t give up until I do.  But there’s no railing or anything… you could fall from the top tier to the bottom pier and break something while simultaneously damaging your social standing.  It’s worse on the bottom tier.  I could quite easily fall off the bottom tier and straight into the deep odourless sea.  I would die then, out on that pier.  That clean odourless, twin tiered dog-shit-free zone of unattainable women would witness the very last scene of my life.

Perhaps, seeing my final despairing wave, those useless fishermen would at least try to fish me out.  They wouldn't succeed, of course, on account of their being bloody useless. But perhaps they'd try.
No. They wouldn't.

This is a topic I have had in my things-to-maybe-think-writing-about-when-you’re-really-really-stuck folder. Not so much stand-up, although that would probably get covered, but more the mechanics of joke writing. It’s always interested me why jokes like, ‘Why did the chicken cross the road?’, stop being funny. It’s hard to imagine them ever being funny and yet I can listen to old Billy Connolly albums, and roar with laughter at stuff I probably know all the words to. Why?

I like to write funny stuff. I find it very hard not to. My novel Left was hard work for me, keeping the humour on the back boiler. Milligan and Murphy was a joy to write. But I’ve never written a joke in my life. I’m actually not very good at remembering jokes either; I have a repertoire of about two. The thing is, where do jokes come from? I’ve never known anyone who wrote a joke. Or at least admitted to writing a joke. But all those tasteless Biafran jokes that were so popular in the school yard when I was a kid had to originate somewhere. There was a recent Simpsons episode where they end up on an island where there’s a secret organisation devoted to writing rude jokes. I like the idea of that. In Nineteen Eighty-Four Orwell could have included a joke machine churning out tasteless gags for the proles. That would have worked.

I liked your little routine. I think you yourself have realised what the problem is with it. It needs tightening. Granted on a stage where you have the benefit of timing and gestures it would be funnier but it needs trimming. This is the best section:

It’s a dangerous pier, Dun Laoghaire pier. There’s two tiers on it. It’s a two tier pier. All the best people are on the top tier. Someday I’m going to make it up there. I won’t give up until I do. But there’s no railing or anything… you could fall from the top tier to the bottom pier and break something while simultaneously damaging your social standing.

I ‘performed’ it for Carrie and she agrees it’s good. Short, punchy sentences. The kind of thing Ken Dodd does so well. You have the big joke and then the jokes-with-the-joke. On the whole though this whole routine is too long. The thing is I can imagine it being funny performed. Take this bit:

There was this guy with binoculars, out near the end of the pier, and I could see that he were watching some cool girls in a boat. I wished I had binoculars.

There is nothing funny here in itself and yet Chic Murray would have had his audience in stitches by including long pauses during which he would communicate non-verbally to the audience. Here’s Chic telling the Long Nose Story. Wait for the ‘tiers’ bit.

It's a weird thing, comedy. My friend Emma told me she laughed out loud while reading my book, making her a social exile on the bus reading a book that wasn't even on the shelves. Clearly, the book is funny if it made her laugh out loud. But when it comes to speaking out loud, I tend to just blurt out words too quickly. Mostly people take my jokes as insults. Sometimes they're right to.

I wouldn't manage stand-up, though. I can write funny material, but I can't write stand-up. It's not trying to remember the piece - I do drama in college, so scripts are okay for me. But I can't deliver the words well. Verbal diarrhoea doesn't work well for comedy, unless you're pretending to be insane. Of course, insanity only works so well for comedy. People eventually just leave when you start getting crazy.

Very nice post, Ken, overall. Now I'm going to be overly conscious of being funny in my books...