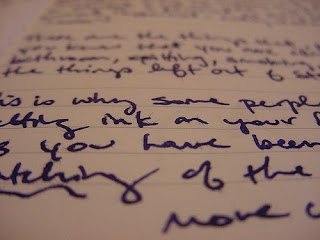 I do it all right, I do quite a bit of it, but I’m not really any good at writing about it.

Writing, that is.  Writing about writing.

I wonder why not?  I love to write - it’s my passion, really.  You’d think I’d be bursting at the seams to tell you how many words I did today or what part I edited and how much fun it all was.  But, no, I don’t ever feel the urge to do that.
I don’t feel the urge to do it now either but I was thinking about it and that’s where these blog posts generally come from – whatever I happen to be thinking about.

So why don’t I write about writing?

I’ve found over time that I need to write within a bubble in order to get it done.  If I reveal what I’m writing at any given time, the intimate relationship I have with the material is instantly shattered.  I’ve told somebody about it and I’ve let them into the world too and now the world no longer belongs simply to me and the story I’m writing.  This has quite been enough to kill projects stone-dead for me, in the past.

So I can’t write about what I’m doing right now… I need to stay in the ‘Bubble’.  But, still, I could be writing about whatever I was writing before, couldn’t I?  I could be promoting it and announcing it and trying a little bloody harder to flog it to somebody.

I also find I need some validation before I’m truly comfortable talking about something I’ve written.  When somebody’s taken a piece of my writing on, whether it’s a play that got a production or a story that’s gotten into print somewhere, then I can talk about it until the cows come home.  I guess I don’t feel that my simply having written something makes it worthy of discussion.  I need that third party to come and want to use it.  Validation; I need a bit, I reckon.

Also, the Internet is already so very replete with people writing about their writing.  For many people, it seems almost as if every paragraph which is completed must be marked with a blog post or a Twitter/Facebook announcement celebrating the fact.

I’m not complaining.  Writing is such a personal thing, whatever works for you works… so long as it works.  I even tried a little bit of that with the book I recently finished writing (‘too boring, let’s not).  For once, I hinted to some people what I was doing, I even outright-told a few people – unheard-of for me.  No detail, that would have been Death, but just a few mentions that I was finally intent on finishing that book I’d been struggling with.  I did this to try to push myself.  To see if, by putting my intention out in the public domain, it would add some impetus to my doing it.  I’d be churlish if I didn’t admit that it worked, to a certain extent.  People would ask me, ‘How’s it going?’ or ‘Aren’t you finished yet?” and I kept at it.  I won’t be doing that again in a hurry but I did see how it might work for other writers.  To be constantly announcing your progress and hinting at your methodology, if it drives you, it drives you.  Like I said, whatever works…

But there’s no doubt that there are people out there who are much more enamoured with talking about their writing as opposed to actually doing any writing.  That’s the danger.  You can get so wrapped up in telling everyone about it, keeping them posted, that you forget to do any of it.  You gotta watch out for that one.

So, what am I doing now?

Well, it’s a thing… about a thing… it should take me about... hmm hmm hmmm to write and…

Another great post there Ken. I used to get so irritated by Twitter announcements of how many words a certain person had written, or how they had been steaming ahead with their latest project and were just now stopping for a cuppa tea or a pint after 27 hours straight work, but then I realised that some people need short-term validation, presumably in the guise of @ responses on Twitter - "Well done, you!" / "Can you come write some of mine now?" / "Hells bellringers, I don't know how you do it!" etc etc. It must just be a way that some people have of gee-ing themselves along.

What I would like to do is develop a way of feeding off tweets like that, taking energy from them in order to get my own stuff done. Herd mentality, and all that. Oh, look! So-and-so has knocked out another 5000-word masterpiece in a day and a half! I'll have a crack at that, shall I ..?

One day, one day.

Writing about writing bores me silly. You stay just the way you are (Billy Joel anyone..?).
x

That's why I refuse to join Twitter or Facehook. I mean, who cares? Such "social networking" is really about public diary-writing, or self-advertisement. I agree that a lot of the Internet is self-advertisement. I think, however, that the nest of the blogosphere gives you valued-added, too. Maybe a blog post is a boast, but it also has things to think about in it.

I've had a lot of feedback on my own blog that readers do enjoy reading about my creative process, or my musings on it. Sometimes that's writing-about-writing, but lately it's more about art and music. What interests me is not how many words I wrote today (in a poem, who cares anyway?) but the context of the writing, and, dare I say it, its Source. For me, at least, a lot of my meta-writing is dancing about the Source of my creative flow, in all its exuberant, messy, continuous flow.

I don't think the herd can support that. I think it has to be individual, solitary, even inward. Your bubble, as it were. I don't have the same need for a bubble around what I'm writing as you and Jim Murdoch do, it seems, but I also don't share what I'm doing with most people. That's because, in my experience, the herd mentality is incapable of being supportive, because the herd is inherently conservative and self-involved—the herd operates on the Tribal level, not the Individual level that creatives must work on—and that is WHY sharing one's art too soon can rob it of power, momentum, and significance. We all know that sharing something too soon (too soon for OUR process) can kill it, kill its momentum, and so we avoid doing that. I'm getting at why that is. The herd mentality that is explicitly in operation in social networking, with all its drama, cliques, and BS, is Tribal activity writ large. It's something an artists needs to ignore, in order to make art.

If we want mutual encouragement, that can come in small artists' groups where we meet to gather and support each other in our work—which is what small circles within the blogosphere seem capable of doing for us, just as face-to-face writing groups have done forever. But in either venue, one has to get to know the people one is interacting with, learn where their judgments are both strong and weak, and trust them to operate within the agreed-upon rules of interaction. In other words, this is no longer a Tribal interaction, but a gathering of Individuals. And you're not going to find that on Twitter—because there's no depth of relationship on Twitter.

Oh, I so get where you’re coming from here. I mean, seriously, I’ve written nearly 50,000 words of my new novel and so far all my wife knows about it is the original premise which has very much become the background to the piece now, that the title is Left and that it explores various kinds of leftness. And she knew that about five years ago when I first got the idea. I talk to her about stuff that I’m researching but she knows better than to ask where it all fits into the grand scheme of things. Since I’ve got better and been working steadily on the thing I’ve wanted to withdraw more and more and just be in my own little writing world because that’s the way I used to be before. I’ve told Carrie that I expect to have the thing ready for her to read when she comes back from America in a fortnight or so but since I’ll be left to my own devices for all that time I don’t feel particularly reckless telling her that. But I have to say I hate these people who provide day-by-day reports. Okay, I don’t hate them but I couldn’t cope with being in the public gaze like that. It’s bad enough telling people that I’m cutting back on my blogging to finish my book because now I have to finish it. Not that I wasn’t going to but in all seriousness someone asked me a week after I put up my Christmas post how I was doing. They were just trying to be nice and I was nice back but I really don’t want people leaning over my shoulder asking me if I’m there yet.

After it’s done I’ll be happy to talk about how the experience of writing this one differed from the other four (and is has been a very different experience) but not now. And if I forget some of the details well I’ll make my best guess. I agree there are too many people talking about writing instead of actually writing but that’s fine: I think it’s helpful to share experiences and I hope you do post about your approach to writing someday – when you’re ready though.

I've been reading more than writing lately...on blogs, that is.

But I enjoy whatever you write. And for the record, I don't usually discuss what I'm writing because I hate that, "Well WHEN can I expect to see it?" stuff, as if I owe them a product which is mostly my hobby.

Write on, dear man, write on.