Heel Have to Go 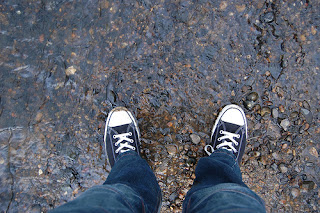 Sometimes I reckon that the world is conspiring to get me to do things that I swore I would never do.

For some years now, I’ve been looking out of my office window and watching all the people passing by.  I’ve noticed many things about them, some of these have things stuck in my head and some of them haven’t.

Here’s one thing that stuck.

People’s trousers are too long.

No, really.  Have you seen them?  Particularly younger people – they wear their jeans or whatever so damn long that the hem goes down over the heel and gets trodden on and mangled in no time at all.

This situation, as viewed from my window, was bad enough in fair or summery weather but it became annoyingly ridiculous in the winter rains and storms.  These overlong pants would soak up enormous quantities of water from the puddles on the ground.  It would get so bad that people would be seen walking along with their legs drenched right up as far as the back of their knees.

I would click my tongue and tut and shake my head and generally go on like an incredibly youthful Victor Meldrew as I watched these semi-sodden people trudge past.  Sometimes I would joke about how civic-minded they all were, soaking up all the excess water from the footpaths and bringing it home with them, meaning that our town need never again fear flash-flooding and well-heeled people like me can walk the streets in dryness and comfort and warmth.

Yes, I was a smug bugger even then.

Gradually, subtly, insidiously-even, mine own jeans have become too long.

I don’t know how it happened.  I haven’t become noticeably shorter or anything.  Still, there can be no doubt, somehow, someway, I have become one of those twats who goes around town soaking up all the excess water in my pants.  This makes me very sad.

Even worse, when I come home and take my shoes off, I have to roll up the bottoms of my jeans until I look like an extra from Pirates of the Caribbean stranded on some living room island.

A little further investigation throws some light on this mystery.  My old jeans fit me just fine.  It’s the new ones, the new ones are longer – not just a wee bit longer either but waaayyyy longer.  And yet… and yet… the leg measurement on these jeans is the same as all my other older pairs.

This leads me to conclude…

That’s it, a bloody Conspiracy.  The jeans manufacturers have made a fashion-decision that a 32 leg will still be a 32 leg but that now the trouser will reach around below the heel and scrape the ground.

Why would they do this?  I can hear the nicer-people among you answer this easily – Fashion, it’s all the Fashion these days.

The less-nice among you, myself included, say, "Bollocks to that!”  (That’s why we’re not nice).  “It ain’t Fashion, it’s Economics.”

And we’re right, we viler-thinking beasts.  A pair of jeans where the hem goes down to the ground gets manky and torn and horrible much quicker than a regular pair.  Then what do you do?  Damn right, you buy another pair.  More money for the jeans-guy.

Not me, though, no more.  I’m at the end of this sodden road…

… I’m off to get my legs extended.

Good luck with those extensions -- much more sensible than platform shoes, and hopefully more attractive LOL

The same jeans problem has begun happening to me, which (being a middle-aged kind of gal) I blamed on the fact that my derriere just isn't what it used to be. Fortunately for you, that doesn't happen to *men* in their 40s.

And don't forge the teenage boy thing of wearing the pants so low they're about to slip off and fall down. That makes the heel-drenching even more thoroughly likely.

One of my friends once accused me of being a fashionista, which is hilarious since I think clothing fashion is ridiculous. I dress for comfort, period. But she was right in that I DO notice what people wear, and the absurdity of lots of it.

In my place of work the law seems to be trousers are worn 3 inches above your shoes, wafting trousers worse I fear!

I've never been in fashion. I've bought fashionable clothes but as soon as I put them on something miraculous (or perhaps anti-miraculous) happens and they don't look right any more. Back in the eighties a girlfriend made me get a complete outfit which I dutifully did, donned and all she had to say was, "What do you do to clothes?"

Sweetheart, the jeans ain't getting longer, you're shrinking (it's your age, sigh)

Mulder, it me...you're right about the sodded-trodden-pant-length conspiracy...can't say any more now...think phone line has been tapped...{and need to cut all the scraggly threads off jeans}.