Always a Mother to Me 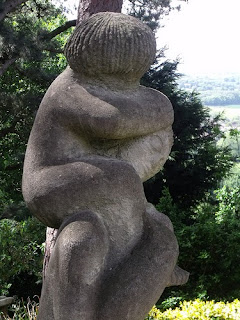 It’s surprising that it’s five years this week since Mum died.  I’m always out by a year, I thought it was only four.

Inevitably it’s a time of year for remembrance and a little sadness.  Although my mate Luce said it well a few weeks ago.  She doesn’t see why Anniversaries should necessarily be a time of sadness, how much better to remember - and celebrate - the person’s life rather than their death.  How true.

That’s what I like to do.  I like to think of the good times and how many of them there were.  At least, I like to try.

So, today, I had resolved to write a happy sort of blog post about Mum and how great a person she was in her own right, not just as a Mum but as a strong, smart, lovely human being.
And here I am, having hit a bit of a brick wall with this.

You see, I know lots of stuff about Mum, lots of stories and adventures and great moments and fun… I could share some of those with you and that would be nice, I’m sure.  But they’re not my stories of her – they are other people’s stories.

All my stories of her are as a Mum.  My Mum.

Does that even make sense?

My Mum was funny and tough and strong.  She was quite short and she had remarkably small feet.  She was always singing around the house and she would never sing in public.  She baked cakes and sent them off around the world at Christmas Time.  She loved Bingo, never went to the pub, was religious.  She made me feel safe and insulated and she always took my side when I needed her to.

These are all things – true things – but they’re not about Betty the Person, what she wanted, how she felt.  They’re all about my perception of her as my Mother.

I seem to be able only to define her as that and nothing else.

Which is a bit sad.

Maybe that’s the way it’s meant to be, for me at least.  My Mum was a great Mum and I’ll always remember her as that.  Perhaps I was also more a Son to her than a person, I don’t know.  I have no doubt that a relationship could have been forged, in later life, where we knew each other more as people than as close family.  Unfortunately, I was gone from home by seventeen and Mum was not permitted to enjoy those later years where such a thing might have grown.

I can be regretful but I can be happy too.  I guess I was never destined to know Mum as much more than Mum.   I was damn lucky to have her as that.

So, (tips forehead to the skies)  thinking of you Mum.

Thanks for everything, I appreciate it.

I hadn't ever thought about it, but I think that you are right. In regard to both my mother and my children, I understand to a degree what they are outside of my relationship to them, but it is that very relationship that defines them to me, myself and I.

My own mother died about thirteen years ago. I don’t remember the exact date but then I can’t remember the date my dad died either. I puzzle why this is but it doesn’t worry me. I’ve described my mother as a ‘professional’ mum and the fact is that when she had no kids to look after she simply turned her attention to stray animals. I have no idea when she stopped defining herself in any other was but life only made sense to her when she was fulfilling that role. So, like you, I only have stories about how she made sense out of life by finding things that needed looking after. Even when the kids moved out she still played the mother and every time I visited her there was stuff she’d found in the second-hand shops, and some good stuff she found there too; that’s what happens when you visit them faithfully every day which she did. And, of course, when Carrie arrived on the scene Mum started looking out for things for her too. My one regret is where she was the archetypical Mum I was never the perfect Son she deserved.

I love this post. One thing I'm certain of is that your mum was very proud of you as a son, and had she known you as a man/person she would've been equally proud. X

Hi Ken
It's interesting that our picture of our mother is so heavily influenced by that first few years. As we update ourselves about how we see ourselves, even our contemporary friends we seem to closely hold the picture of our mother we created in childhood. I was fortunate that I could see my mom in different times during adulthood and consider it a gift that I was allowed to be prtesent as she prepared to die and then died. Thank you for reminding me of this. Steve

Lovely, I am a mum and I seem to have something in my eye....

Sometimes we need to just see our parents as "Mom" or "Dad". It's nice that we give them credit as being adults but it's how they dealt with us as their CHILDREN that shaped our view.

When my Dad had cancer, he and Mom were separated. Although they were speaking by the time he died, Mom often took verbal potshots at him. One day I sighed deeply and offered quietly, "He may not have been the best husband to you, but he was the best Dad in the world to me."

Sometimes, you just have to admire with that child's sense of love, no matter how old you are.

I can only think that your Mum must have thought that she'd done her job really well if you still define her a Mum. It was the same with my Mum. How else, as children, are we meant to define our mothers? As a mother now myself, and having come to motherhood quite late in life, my proudest role and certainly the one I've put most effort into, is that of a mother - so I reckon that your Mum, my Mum and all the other lovely Mums must have done their jobs well.
As ever, a beautifully written and very poignant post Ken ... one that goes straight to the very heart of how so many of us feel and think. x

Almost six years since my mom, also a Betty, passed away. I too sometimes lose track of a year when trying to remember how long it has been without her. My mom was the best, she raised three children when my father died at the age of 37. I, the oldest was five, my dad died next to me in bed, my sister was two, my baby brother just 4 months old.

Here's to both Betty's, and may the memories we have of our mothers bring us some happiness and renew our respect during these times, in the absence of them now.