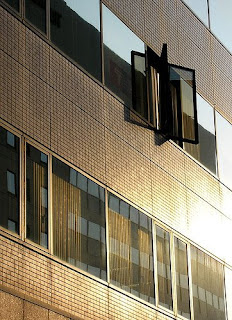 Back in 1991, I worked with a team of Building Contractors in London. We spent several months doing up a floor of offices just off High Street Kensington. I was normally on the other side of the drawing board on these building projects, so this was a visceral, exhausting but highly-entertaining time for me.


One of the guys, Richard, seemed to provide the bulk of this entertainment. He was a mid-twenties Cockney guy who seemed to constantly challenge his environment on every possible level. Everything was a Federal Case to him.

One Saturday morning, coming up to tea-break. Richard announced he was going out to the shop for some apples. Apples were a significant departure from the stodge we normally shoved down our necks but, Richard being Richard, nobody questioned his decision.

"The front door is locked," said Denis, the foreman, "so buzz the intercom when you want to come back in."

"Oh and Richard," said Denis, "don’t piss around, get right back here or we may fall out."

You didn’t want to fall out with Denis. His type of fall out was more of the nuclear kind than the emotional.

Richard left and we all sat down for tea on the floor of the big office with the windows open onto the street six stories below.

Our conversation covered all kinds of topics over the next fifteen minutes, including The Arsenal’s chances of a draw in the afternoon and the likelihood of Rambo having a positive impact on the worsening situation if he were to be parachuted into Deepest Iraq.

After a while, all topics were exhausted and we sat quietly with our thoughts and our tea. Denis suddenly looked around angrily.

"Where the hell is Richard?"

He didn’t actually use the word ‘Hell’.

That fall out was coming…

Richard was, in fact, down on the street, six storeys below, looking up at our open windows so far above.

The electricians had disconnected the door entry intercom for reasons known only to themselves. Richard could buzz that button all day if he wanted, nobody on the sixth floor was ever going to hear.

He wasn’t getting back in.

Richard soon realised that the intercom was a futile exercise. He paced up and down the street, glaring up at the windows, wondering how on earth he could get back in. The phones were all disconnected up there and the only mobile phones in those day were the same size as a concrete block and were not generally owned by angry foremen.

Back up on the sixth floor a colossal wave of post-prandial torpor had set in. We all lounged around dreading the call back to work.

A discordant tone drifted in the window.

"Did you hear something outside?" Someone asked.

"No," someone else replied, "it was the radio, now shut up."

Back at ground level, Richard threw his hands up in exasperation. Then he remembered the paper bag in his hand.

A wild idea formed in his fevered mind. If he could take an apple, a single apple, and throw it though that sixth floor window then his cohort within would be alerted to his situation and would get up off their arses and let him bloody in.

But the window was six storeys high. It was a long way up. A legendary effort would be required on his part.

Denis stretched and raised himself off the floor. It was our signal, the call to action. He hardly needed to speak but he did anyway.

"Come on men," he said, "one more time before the weekend."

Just as we were getting up, something strange happened.

A bright red apple sailed in the window and landed on the floor.

Richard stared up in disbelief, arm still extended. He had done it, he had accomplished the seemingly impossible feat. Songs would be written about this, stories would be told. He did a little impromptu dance on the street, then looked up and waited.

The apple bounced impressively, rolled across the floor and stopped at the toe of Denis’ boot.

"Where the hell did that come from?" somebody asked.

Denis thought about this for a long moment.

I did a follow-up to this post which you can have a look at here if you like.

I have to go find some other stuff for the sink. Can't use you again so soon, people would start to talk.

This is quality though.

The perfect ending... I want more so it must be just right.
:)

The ending was magic.

That ending was so unexpected. I'm still laughing about it... Denis really doesn't have much inquisitiveness or imagination, does he?

It's a great story, Ken, I love it. You've told a great story and the characters really come to life- look forward to seeing what you do with it = )

He he he, that was hilarious to me. You really got style Ken. I already feel lighthearted. Keep posting.

Well-done! Yes, it was a perfect ending!

If the apple had gotten him back in I would have said "cute story" but since it didn't, I say "brilliant!"

Love the accompanying piece on how you wrote it too; a great reminded to just get it written.

What a great style. Neat, racy and witty ending.

Oh that's hilarious! Amazing that he actually managed the throw with that accuracy, but the reaction is a beautiful punchline for it...and so so true to human nature. Love the title's double meaning too.

And yes, Rambo should be dropped in to sort out the Iraq business, and why do I suddenly feel hungry?

I love this story the first time I read it.,,and I still laugh reading it now...lol...

Thanks for the link. Cheers.

Nice story. I saw the apple flying through the window, I didn't see the non-responsive response. Hilarious as always.

Tam, CelloBella, Fiendish, Vincent, BT Cassidy, 2WriteHands and Jena: Thank you *so* much for commenting on this way back when. I valued these comments so much, I can't think why I thought it might be a good idea not to reply back then. :)

Kathy: My eyes are popping at the level of comments you are now generating on The Junk Drawer. I think it has something to do with you being on my fridge. :)

Terry: Thanks. There's certainly a lesson in it for me. I can sit for ages building up to writing particular things and I effectively fool myself that my subconscious is gnawing at it all the time. Perhaps it is, for a little while, but if I can kick myself to site and write, I can usually overcome most of the obstacles which my gnawing had thrown up.

Beamer: Thanks mate! Always good to hear from you. :)

Susan: I didn't really throw myself into the whole Rambo in Iraq question, I kept thinking I heard a whimper outside. :)

Nicely written. Perhaps an apple to the head, next time, a la Issac Newton, might have done the trick. :)

All that effort wasted. No one even noticed. No doubt Richard later got his revenge. I hope it was evil enough.

Reminds me of a get well card I saw once: "An apple a day keeps the doctor away...if you throw real hard and your aim is accurate."

As always, you're right on target. ;)

Jenn: I can see that you appreciate the gravity of the situation. :)

Laura: I don't remember much else about him. Oh, he brought his girlfriend to 'Cats' in the West End and got annoyed when one of the cast members tried to eat his choc ice during the interval... I remember that. :)

Hope: I'll confess this to you (don't tell anyone else): I don't think the window *could* have been six stories up. Who could throw an apple that high? Four maybe? Five? :)

Hi Ken,
I like the ending, but with my enquiring mind, I'd like to know if Richard took the rest of the day "off".

That's amazing for him to be able to throw the apple six stories high.

I thoroughly enjoyed reading it.

Aw! It ended far too soon! Imagine Richard's face if someone had chucked the apple back out!

I loved this line the best, I think:

"Back up on the sixth floor a colossal wave of post-prandial torpor had set in."
I can just imagine that.

Have you ever seen Ken Loach's film, "Riff-Raff"?

I thought Ireland was the land of magic. ;)

Uhm, what ever happened to the apple?

Terrific story Ken! I'm saying this because brilliant and hilarious were already used. Funny and good or nice would have been two subtle words.

If all Irish people tell stories like you do, then the Irish would have ruled the Comedy TV world!


Tashabud: Thanks. As I was mentioning above, I think I got a bit over-excited with the 'six stories' - the words looked good on the page though. :)

Oh! Richard got back in later when someone with a key turned up. That's when the story came together and we had a really good laugh about it and I though, it's a good story but how could it be written?

Kat: Yes, I love Ken Loach and Riff Raff captures the 'vibe' of the group of people I was working with at that time. 'Post Prandial Torpor' is a great expression and I throw it in whenever I can.

Zorlone: Kind words indeed, thanks. :) I think the apple was beyond repair. He had some more in the bag though.

Dinah: Richard bounced back from the experience. Unlike the apple. :)

Good Morning, Ken. Thanks for the reply. With the way everybody's commenting, including me, you wrote the event superbly. Continue writing your witty and often times, poignant stories, which keep all of us entertained.

Just about as excellent as a story gets and the best ending ever!