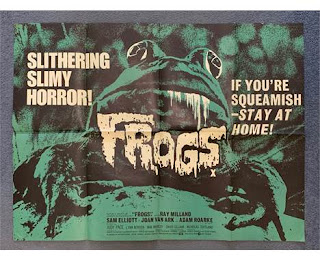 Some of you will know about Talking Pictures TV and some of you will not. I do. So I will tell those of you who don’t know a little something about it. How does that sound for starters?

If you have Sky and you go to TCM on Channel 315 or TCM+1 on Channel 316 and then start flicking upwards, you will pass through a strange little selection of movie channels. There’s the 'Horror Channel' and there's 'Great Movies' and one that seems to show Steven Seagal flicks every other night and one that alternates between showing Christmas movies in August and showing silly romantic films that seem to have been made last week and that all look and sound exactly the same. Then, right at the end of the movie channel lineup, you come to Talking Pictures TV. It’s Channel 328 on Sky, apparently, I just looked it up. So, you can forget all that flicking I mentioned earlier… unless you fancy some Steven Seagal some evening.

I’ve just decided that I'm not going to give you a history of 'Talking Pictures TV' after all. What am I? Wikipedia? Go and look it up yourself, if you’re bothered. It’s been there for some years, and it shows very old movies and very old TV shows and what else can I tell you? That’s about all I know. Except for the strange, strange gift it gives to me. Except for that.

Let me explain. Sit back down. Come on. I’m only getting warmed up here.

I started going to the cinema when I was quite young. In our town we had the Gaiety and the Savoy. The Gaiety was the posher option, but more fun was often had in the Savoy, which had a sort of a Wild West vibe about it. As I used to queue to go into the Saturday matinees every week, I used to study the posters that littered every wall. Those wonderful UK Quads that promised all the great cinematic things to come in the subsequent weeks and months.

These posters, for me, were all-too-often a taunting display of the completely unattainable. The vast majority of the films they promised were too ‘grown up’ for ten-year-old me to be allowed to see and they would never turn up in a matinee anyway. They were therefore an unfulfilled promise that made me hunger and thirst for fulfilment. Not so much to see things I shouldn’t see. More to be able to see all of the movies in the world, for I loved them even then.

Many of those memorable posters went on to become favourite films of mine when I became an adult and finally got to see them on video or TV or in retrospective cinema places in London. Films like, ‘The Taking of Pelham 123’, 'Klute' (I couldn’t ever begin to guess what a ‘Klute’ was), or 'Chinatown'. It is a source of much pride to me that I now own the beautiful original Chinatown poster that hung in the Gaiety Cinema when I was eleven years old. And I don’t mean I own one that looks like it. I have the actual poster that was displayed there. It’s a story for another day.

These were the posters for films that went on to be famous, lasting, and great.

But there was a whole other section of posters. The films that came and got shown and then vanished without a trace. The films I never got to see but the posters of which still continued to haunt my dreams for years afterward.

This, then, is the strange, strange gift of Talking Pictures TV up on Sky Channel 328. Regularly, often, and inordinately late at night, the channel resurrects the films that were foyer posters from my 1973-1976 matinee-going days and shows them in all their glory. On this wonderful channel, I have now filled in many of these gaps in my movie life with wonders such as ‘Frogs,’ ‘House of Whipcord,’ and ‘To the Devil, a Daughter’. I have also reminded myself of gems such as ‘Burnt Offerings’ (‘loved that book), ‘Juggernaut, ‘Hennessy’ and ‘Squirm’ which I did manage to see, back in the day, but never thought I would see again.

All very well, Ken. In fact, it’s quite lovely in its own peculiar way. But ‘strange,’ really? How strange is it, the simple re-running of old movies and, even if it is a bit strange, does it really justify the use of the word twice? Strange, strange? I think it does. It is strange and, more than that, it is strange in two different ways. Hence the doubling up.

The first reason it is strange is this; of all the movies that I now see on Talking Pictures TV, the ones that I burned to see as a child… well… some of them are actually pretty bad. I suppose this is not surprising. The best of the films that I couldn’t see naturally have lived on and are now seen regularly here and there. The vanished ones have often vanished for a reason. There is an undeniable ‘archival’ quality to the reappearance of these old movies, but they sometimes aren’t all that great. Having said that, There are great movies to be had on this channel and you should certainly go there for a look-around.

And the second, contradictory, reason is this; it doesn’t really matter one little bit if some of movies I burned to see have turned out to be a little bit poor, slightly low budget, somewhat badly acted or occasionally woefully dated. They are still all quite wonderful to behold. This is going to sound cheesy, I know, but it’s the best way I can describe the feeling and perhaps it is apt if I use a somewhat contentious film to do it.

You see, it’s like the end of Titanic. When one of those old, crap movie films from the posters of my youth comes to life on Talking Pictures TV, it’s really just like that.

It’s as if the long dark halls of those boyhood movie parlours of my youth spring to life once again, all bright and renewed. The original Gaiety may now be lost as part of a shopping centre, and The Savoy may still sit at the top of High Street as a rotting old husk, but it really doesn’t matter. When one of those old poster-movies plays, no matter how poor it is, it’s like the ticket-man draws the curtained door open for me and nods me inside. And I get to stand once again in that carpeted foyer and smell the chocolate and the popcorn. And, finally, at long last, I get to enter into the darkness beyond to sit with the forbidden movies themselves and the infinite mysteries they are about to unfold.

It's sad what became of 'The Savoy'there's a youtube video of interior as it is now. I've never ventured into the new Gaiety, unlikely to either. TPTV is a great source of 'older movies' great vibe to it. It's a family run business from a garden shed initially I believe. They have a twitter presence & are quite responsive to questions & requests for movies/tv shows, a lot depends on licencing for them. TPTV nearly closed last year, but thankfully made it,I been a viewer a few years, I suspected you might be too Ken. The 'great' movies,action channels are Sony owned so have a big back catalogue. TPTV does keep good memories alive tho ,take care Ken
GH

I was trying to remember if you and me went to see 'Hennessy' together. There was a great to-do about it because it contained footage of troops on the ground in NI. It was over 12's. It's memorable because the lady selling the tickets challenged me on being over 12 and I *was* 12. The outrage I felt. I mean, I'd already been in to see Death Race 2000 a few week's before. :)

we did indeed Ken ,both movies as I recall, Death Race 2000 was of a friday night & there was quite a group of us on that night

For reasons not clear, even to me, I always think of Talking Pictures TV as my guilty pleasure.
Which is as weird as some of the movies 😁
For those unacquainted, it’s also available on Virgin 445, Freesat 306, Freeview or Youview 82.

I believe the last film I saw in an actual cinema was Star Trek Into Darkness which was released in 2013. Nothing has tempted me back since and I suspect that’s me done with the pictures. That’s what we called it when I was wee, going to the pictures, and that’s what it’ll always be in my head. Same as when I record a film nowadays, I tape it although there’s no tape involved merely a ridiculously-long string of zeroes and ones. In my hometown there were two picture houses, the George (the posh one) and the Rex and, of course, in those glorious salad days the main way we heard about new films was only when the poster went up and we had to guess what we might get for out three or four bob (ergo shillings) depending on the year. The thing is I don’t recall being particularly disappointed by any film back then. I certainly never walked out of a film—only did that once in my life when my sister stormed out of The Hitcher if memory serves—because even if the film was below par the experience of sitting in a dark hall with maybe a hundred other kids never got old. Well, maybe by my thirties it had lost its edge.

I don’t have much time to watch old films but occasionally I run across one online I can’t resist. The last couple were two obscure Peter Sellers films, Hoffman from 1970 and The Blockhouse from 1973. The first apparently Sellers loathed because he felt the character of Hoffman was too like him in real life which piqued my interest; the second was him in a rare dramatic role. The Blockhouse is about as bleak as a film can get, a dozen or so POWs get trapped in an underground bunker full of provisions and decide to wait for help which never comes. Hoffman’s premise is a creepy one, a seedy executive blackmail a young girl from the steno pool into spending a week with him at his flat, and Sellers is wonderful as the lascivious Hoffman throwing away lines such as "Hope never dies in a man with a good dirty mind" and "Please make yourself look as though you want to be fertilized" but here’s the thing, he doesn’t exactly appear to be in a rush to do the deed. Now, is this to prolong the girl’s torment or is there something else going on here? In many respects it’s the old Beauty and the Beast story. Many cite it as their favourite Sellers film.

Rather than old films what I’m finding myself drawn to these days are the rock albums I could never afford as a kid. Album covers are like film posters in that respect; they promise much and yet often fail to deliver. Oh, the hours I spent in record shops—back in t’day when record shops still existed—drooling over albums I simply couldn’t afford. I doubt I’ve owned more than forty LPs in my life! Things changed with tapes and CDs—I have over a thousand of each—but so much was missed in my formative years. Bands like Amon Düül, The Soft Machine, Gong, Caravan, Van Der Graaf Generator, Rush, King Crimson, Gentle Giant, Can and Jethro Tull were just names to me. Sure, I indulged in Genesis and Pink Floyd but that was literally the cherry on the cake. What about the ruddy cake?