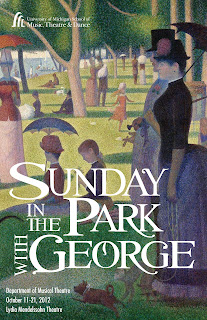 This won’t be a terribly gushing post; I don’t really know enough to gush. But I learned the news of Stephen Sondheim’s death on Friday evening, and I feel I should type something, even though I know so very little.

I came to appreciate Sondheim late. I think that’s a key part of why I now admire his work so much. I had to grow into it. Even when I was quite young, I knew of him. I listened a bit and didn’t quite get it. To me, back then, it seemed stagey and slightly off-melody.

But, like I said, I’ve grown into it. I think I needed to. It’s often pretty grown-up stuff.

But, like I said at the start, I’ve only grown a little into it. Scratched the surface. There’s a life’s work there. So much to see and so much to hear. I'll be working on that in the coming years, if I'm spared.

I admire the work he did. My current favourite is ‘Sunday in the Park with George’. I have haunted YouTube on that one. It’s so strong on Creativity and Art plus it’s got Mandy Patinkin in it and ‘Sunday’ right at the end.

But much as I adore the work, I also adore the way he did the work and I take encouragement from it. Two things, really. Stephen Sondheim pushed boundaries in all kinds of directions and, importantly, experienced failure upon failure at times. But he did not stop, and he could not stop. In my own attempts at writing, I’m not much like Stephen, but in this one thing, I kind of am. I fail, I mess up, but I won’t ever stop.

The second thing is about the level of real feeling in his work. My friend William Gallagher was on a little uncharacteristic tirade, over on his blog last week, about that cliché advice that goes ‘write what you know’. I’m with him on that all the way. I think it’s bullshit too. For my own part, I edited that advice for myself quite a long time ago. For me, the advice now says, ‘write what you feel’. This works for me now. Oh, you don’t have to wear your heart on your sleeve or go around weeping and wailing about everything in the goddamn world all the time. But I tend to audit the stuff I do to try to ensure that there's at least an ounce of ‘blood’ and emotion in there somewhere. If you, the reader, the audience, can’t see it, all the better but it’s the stock that flavours the stew, even if you don’t know what it is.

And Sondheim, he tapped the deep well of his soul in his work.

I think that’s why I’ve had to grow into his work. I think empathy gets learned as we go through our lives, to some extent at least and, until you’ve learned it, you won’t get the Art that demands it.

Let me give you the briefest of ‘for instance’s. When I was young, I would watch movies where characters punched their way through glass windows, and I wouldn’t blink. But, when I was eighteen, I accidentally punched my way through my own window. And the blood, the wound, the painful removal of the impaled wrist from the shard of glass, the stitches, the lingering scars, they all taught me a little empathy on that particular subject. Now, when the detective goes through the window in that old movie, I wince. Boy, do I wince.

So let it be with Sondheim. If you don’t get him now, well, you may never get him but it is entirely possibly that, someday, you just might.

This weekend, a new play is taking shape inside my head. An idea that has lain around for years has, with a little encouragement, begun to extend its tendrils through my mind and through my senses. It’s a rather heady feeling, when it happens, and I wouldn’t swap it for anything.

Thank you, Stephen Sondheim, so full of learning and teaching and creativity and respect and, yes, genius. Your refusal to fail and your willingness to share your heart has set you on high and, now that you are gone, you will  ascend ever higher and higher as the years go by.

And, through you work, you will remain with us for the longest time.

The only Sondheim I know well is, unsurprisingly, West Side Story but going down his list of musicals I only have experience of two. Never been a big musicals fan, Oliver! and that episode of Buffy aside. I noted his death but that was it.

The “write what you know” advice has always annoyed me. If anything I’m drawn to what I don't know and maybe after writing about it I come to know it a little better but that’s it. I know very little. Why else after fifty years am I still finding new things to say about truth?