I've Looked at Lights from Both Sides Now 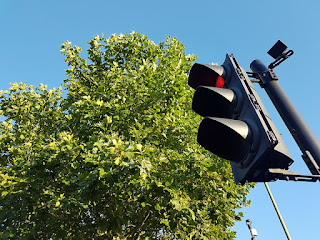 If the many posts on this silly little blog were to be categorised and broken down into related sections (which are both pretty much one and the same thing), there might be surprisingly few themes to choose from. Over the years, I have found that I tend to go around and around in small circles with the things I choose to scribble about.

One such ‘category’ that I tend to come back to is the mediocre quality of driving and road manners out there in my world. Search back, if you dare, and you will find me giving out yards about all kinds of perceived crimes and misdemeanours. I can get quite shirty about it too. It’s not my most endearing quality but what can you do? Nobody’s perfect.

So here I am with a new driving gripe. It’s been a while since I turned up here to rant a bit about how y’all behave out there but settle in. I came to complain and chew gum and, as the man said, I’m all outta gum.

So… red lights and green lights, that’s the subject for my TED talk today. To illustrate my concerns (for concerns, read rage) I will restrict my observations to two sets of traffic lights, both of them no more than 300 metres from my house. They’re down there now, I can feel them, ticking quietly from red to green via orange and back again. Listen, can you hear them? Of course you can’t. You’re miles away. Catch yourself on.

Let’s get the serious one out of the way first. We have a pedestrian light down at the main road. You know the routine, the cars whizz by without a break so we’ve been gifted a light by the council so that we can get to town and not starve. The trouble is that a fair percentage of drivers do not bother to stop when the light turns red. Let me try to quantify, as it might save me from spinning off into uncontrollable rage here. Emmm… I’ve been using this light for well over twenty years… based on my observations… I will say 5% - no that’s too much – let’s say 3% of drivers fail to stop when the light turns to red.

Why? Why would the bastards not stop? (Calm, Ken, calm) Well, the reasons can be observed in the demeanour of the drivers as they shoot past my nose. 20% of them are people who have just woken up to the fact there’s a red light, at the exact moment they shoot through it. They look around in shock and seek to beg forgiveness from some higher authority. Another 20% carry a facial expression that says, “I see the light, but that strange looking pedestrian hasn’t even thought about stepping out yet, besides the light has only just changed, it benefits nobody for me to stop now, plus I’m late.’ 20% more are on their phones and don’t even know there’s a light. 20% more are old and don’t seem to know there is a world beyond their windscreen and it’s a miracle that they’re not in a ditch somewhere already. Another 10% are sundry reasons that would take too long to cover here. It’s the last 10% that really boil my micturition. These fuckers see the light, slow down to almost a stop, but then change their mind and drive on through instead. I can only conclude that these ones are serial killers and psychopaths and I suppose I really should be writing their plate numbers down. There are a small subset of well-meaning folk who stop on the green light and wave you warmly out into the oncoming traffic on the other side. I have a soft spot for those ones, even though I shout my distain at them. They are the good people paving the road to hell. You can’t entirely hate them.

It all sounds quirky and fun when I write it out like this but, really it is very far from that. When I stand at the side of the road and wait for the green man to tell me to cross, I am rarely alone. My compadres are generally young children on their way to and from school. They are lovely but not as clued in as I am to the wayward world that we live in. Someday, I fear, some small person will trust the green man too much and step out and one of the 3% will be barrelling down at them. It’s not an irrational fear, at the side of the road there is a fresh bunch of flowers and a candle that somebody keeps lit as best they can. Lives have already been lost here.

Moral of this part of the story? If you’re a driver and the light goes red, please stop. It’s not rocket science. If you’re the pedestrian and the man goes green, make sure before you step out that the car bearing down on you is one of the 97% who might stop.

There. Let’s call that the ‘Red Light‘ section.

Although I’ve set a sombre tone there (not without good reason), I feel it can be instructive for me to now climb behind the wheel and view my world from there. So here I am, no longer the humble pedestrian but, now, the omnipotent driver. It’s a different world from back here, an altogether altered point of view.

You see, we have another traffic light within 300 metres of my house and this one is new. Where, previously, there was an ordinary junction where you waited your turn and pulled out when it was safe, there is now a traffic light. It’s a significant improvement. You could have sometimes been waiting ages to get out on this busy road. Now, when your light turns green, it’s your turn and you can go.

I mean, people don’t go, do they? The light goes green and there’s three cars in front of you and this light only lets about four cars through before it goes green again and the car in the front, right at the lights, is just… fucking… sitting there.

Why won’t you go, car at the lights? The signal is clearly green and yet you sit there like a big gobshite and I’m never-ever going to get through the light now.

Why are you still there? Have you lost your cough lozenge down the back of the seat? Is your Narcolepsy kicking back in? Can’t you find the right gear?

It’s usually none of these things.

It’s usually the same thing. The same thing that has 3% of drivers racing through the pedestrian light up the road. It’s selfishness and lack of care for anything other than themselves (they’re one and the same thing again, Ken, you did that earlier too). The person at the front of the queue knows they will get through the green light, they’re right there. So, they don’t give a thought to the people in the queue behind. It doesn’t matter a jot to them whether anyone else gets through or not, just so long as they do. It is the same reason why the person at the front of the queue won’t even bother indicating which way they are going 58% of the time. They are okay, nothing and nobody else matters.

This driving behaviour is all over the place. An insular lack of care of regard for anything. And the road is a microcosm of the world at large. We are boxing ourselves in more and more as we go. Looking out for number one.

Absolutely nothing else matters.

Except it does. It really does.

Regarding the subset who stop and wave people across: there's a supermarket near where I live where a fair number of pedestrians have to cross the entrance road. Very often drivers pulling in will stop and wave people across, despite the fact that they are just coming off a mini-roundabout situated at this entrance in a quite congested bit of town and that the pedestrians are safely stood on a traffic island. I have no idea what's going through their minds - you don't stop on roundabouts! - but they're blocking the roundabout with their pointless benevolent gesture, snarling up the traffic and risking minor prangs for everyone behind them who has been brought to an abrupt stop. The thing is, the flow of traffic into the supermarket isn't enough to slow pedestrians (of whose number I am often one myself) even almost significantly, so these drivers are causing a problem where none existed. They think they're being kind but they're just being pillocks. Anyway, moan over.

When Carrie and I moved house I hired a car for a week so we could do the necessary and retain our independence. Now I’ve driven since I was seventeen and had no issues getting back in the driver’s seat even if I didn’t understand half the things on the dashboard and couldn’t even figure out how the radio worked. I understood the basics, how to turn on the lights, indicators, gears, brakes and all the rest. And, although busier, the roads were the roads I’d always driven on. All in all everything went smoothly other than I hated every second behind the wheel. I used to love driving on so many levels but all that’s gone and I don’t see it even coming back, in fact even though I renewed my licence after the move (a legal requirement) I’ve told Carrie I never plan to drive again. I don’t need the stress. I never used to find it stressful even all the things you mention above; I coped with that just fine. Maybe I was just never in that much of a rush to get anywhere, me being the kind of guy who always leaves WAY earlier than he needs to to get anywhere. (I used to be the first kid to arrive at school every morning.) When I did have a car I crammed too much into my life. I was always buzzing here, buzzing there. Now I don’t buzz anywhere. And I really don’t miss it.

This doesn’t mean people no longer annoy me. People being people are always going to annoy me. My gripes are mostly to do with rubbish. Scotland has never been Singapore and I know that but… Okay, Friday’s bin day here and because Carrie and I hardly use our bin I’ve started going out late and sticking any overflow in ours, me being neighbourly and that. I looked out of the window Thursday teatime and what did I see? Half a dozen black bags just piled there. I mean how much effort would it have taken to look in any of the bins there to see if they would squeeze a couple in? I took five and found a space for the sixth with ease. I don’t get people. I really don’t. My mother said, and often said, the world would be a wonderful place without people and she wasn’t wrong.