To See the Train 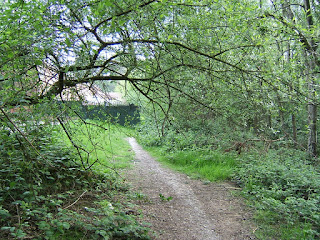 The recommendations we currently live under, here in Ireland, include one that says we can take some exercise every day, while practicing Social Distancing, but that we shouldn’t stray any further than 2 km from our home.

Wishing to get a walk in, but not really very keen to impose ourselves on anybody else, I hit Google Maps to inspect my vicinity and my boundaries. I happened upon a previously unnoticed slender country lane that continued down the back of a little-used road and seemed to terminate in a wooded area. We resolved to check it out.

We’re now been walking there once a day, every day, for the last week or more. We’ve seen one girl on a bike and a man in his tractor and that’s all. Apart from these brief crossing of paths, the laneway has been ours. It’s not a terribly long laneway, so we go up it and back and then do it all over again and that’s our walk.

It’s nice to have a little space and it’s quite an advantage to not have to be calculating how to best keep clear of other people all of the time. The laneway also has horses in the adjoining fields, quite a lot of them actually. They remain pretty aloof, not really looking to say hello or anything like that. They tend to hang near the gates of the fields, because that’s where their feed is, and they eye us up in a detached fashion, but that’s about it with the equine interaction. This suits me okay, I’m not a horsey person.

There are also rabbits. Their white butts flash regularly in the dull green of the fields and sometimes they move across the lane in front of us. (Sorry about that boring use of the word ‘move’ – ‘walk’ looks wrong and I can’t bloody bring myself to use ‘lollop’.) Once, we saw a pheasant. It’s rather a wildlife jamboree by our usual standards and that all adds a little something to the excursion.

It's not any kind of nirvana, though, our little lane. It's quite heavily littered in places, by fly-tippers, and the views are green and underpopulated but not otherwise inspiring.

I mentioned that the online map shows the laneway leading into some woodland at the end. This is indeed what happens but, when we got down there, we found that we didn’t get to go in. Just as the woodland commences, the railway track runs perpendicularly across the lane. Of course, I knew this from the map but I thought we might be able to get across. No such luck, though. The track is protected by bright red ‘high vis’ gates and these gates are firmly padlocked. No way through.

Because of this, the wooded path on the other side of the tracks quickly gained the status of an enigma to us. It curves off up into the unseen in such an inviting way that it’s hard not to speculate about what wonders might lie up there. There could be a house made entirely of sweets and candy, an old lady and her wolf, or even (less likely) three pigs in some new-build housing. We stood on our side of the tracks and looked up the inviting lane and wondered what or who was up there.

One day, as we stood and speculated, the rail tracks began to fizzle and sing. The train was coming. We don’t have enough trains in these parts to say, ‘a train was coming’. It was the train and it was on its way. We stood back a little, even though we didn’t need to, and waited. Before long, the train appeared. Four carriages and an engine. We waved to the driver and he waved back and blew his horn. Four completely empty carriages rattled by and that was it, the main Dublin train had passed.

Since then, without really agreeing it, we have timed our daily walk to be down at the gates when the Dublin train comes through. Some days, we’ve missed it and been back up the lane when it clattered through. Yesterday, we stood and waited at the end of the lane for the train to come, just so we could get our wave and our whistle toot. In a matter of two weeks, from being professional people, parents, and active members of our community, we have become the Railway Children.

Not really though. That’s mostly just an attempt at a funny line.

Our waiting to see the train roll through is not any indication of a reversion of sophistication or intelligence. It’s not a sign that we’re losing our marbles. It’s just a small connection in a moment where small connections are rare and valuable. The train may be empty of passengers, but it is still on the move. It is traversing the entire country while we are confined to our homes and our two-kilometer laneway. Seeing the train, waving quietly and getting a toot back, is something. In months and years to come, it may seem naive and even laughable that we did this thing at this time.

But, in truth, I don’t think it will. Perhaps a new family ritual is being instituted, right here and right now, down the littered lane. Perhaps, on some particular marked day, in each of the years to come, we will venture again down the lane just to wave at the driver and to remember all that came to pass in the Spring of 2020.

Who knows if we will or not? Not me, that's for sure.

It’s just too early to tell.

I'm lucky we can still go to our exercising spot. Dooney Rock was chosen 3 years ago cos as a pup Harry liked to wander, an escapade in Cullenamore beach involving the Atlantic ocean stray seagull chased across the putting green of golf course & depending on a friendly horse rider to return him,left the choice in no doubt. Dooney isn't in best of condition, but it's under 2km circuit,easily walked, omitting climbing to top of Rock itself. Few if anypeople about, ideal.Since the restrictions there's lots of footfall in my street & round the cemetery,unusual as this only happens at weekends.The 'Back Avenue' virtually deserted today, took a drive to feed the ducks, one couple who run a nearby B&B that was it. Life is like a 70's sci-fi movie lately,empty desolate streets, looking over my shoulder incase Charlton Heston is about, stay safe Ken

You too, G. Nice to hear about the old places...

There was a train line two minutes from our house growing up and trains were a big part of my childhood although I was sixteen before I ever stepped on one. My dad bought a half-decent Hornby train set but I suspect he got more out of that I ever did. Lego and Meccano I could get into but toy trains going round and round and round not so much. The railway line was different and we often hung around there. Not that the trains themselves were particularly exciting and, as with cars, they’ve become less so over the years. Remember the Patriot and Coronation classes of old; sound like starships, don’t they? Now I couldn’t tell a Class 303 from an 04, 08, 11 or 12. No class. (Sorry, too easy.) We often played in the train yard as kids, in and out of brake vans and spooky empty coaches. I don’t recall ever being chased off; security was non-existent. The last time I was there there were high wire fences along the track and it was inaccessible. The train yard is now a retail park.

It was nice where we lived then. You got to the end of the street: left and then right took you to the river and countryside, left and left again took you down town, right led to the railway and the industrial estate behind it and behind that the beach. Straight ahead was the golf course and that was another place I adored after dark during my solitary teen years. I really was never in the house back then. Such a change to now. Each place had its enticements. No matter what my mood there was somewhere to wander round.

Going for walks was a big thing growing up, walks or drives. Walks were obviously cheaper. My dad and I continued walking together right into my thirties. You’ll remember the story about the time we took my daughter with us and she couldn’t grasp the concept of not going to somewhere, simply walking for the pleasure of walking; I felt I’d failed as a father that day. I hadn’t failed. Life (or, to be more precise, my ex-wife) had conspired against me. Had I not been forced to become a part-time dad there would’ve been time more time for walks. Nowadays we do lunch. That’s our thing. Dad and I never lunched. Mean ol’ bugger wouldn’t pay for a sit-down meal when there was perfectly good food at home. I remember once coming back from Edinburgh my mother insisted we stop and have a bite to eat at a café and Dad sat in the car. God he could be stubborn.

Picturing your Dad sitting in the car, arms folded defiantly, while you and your Mum grabbed a bite to eat. Fair play to him, he stood his ground. :)

This is lovely, Ken. My dad is a model railroad enthusiast--a rare breed, at least here in the states. We tease him about it quite a bit. But his dad worked for one of the railroads here for a while, and he's always been kind of fascinated with trains. Anyway, he and my brother sometimes go on weekend trips with other railroad enthusiasts just to watch trains in train yards couple and uncouple and switch tracks. I'm sure he would be be thrilled to have a train so close by his home that he could walk and wave to the engineer right now. :)

Thanks, Emily. I'll give the engineer an especially large wave from your Dad tomorrow. :)

Where we live there's no pavement on our lane and a short walk up it leads to a crossroad which marks the boundry to the village. Beyond that is just a country road and fields for miles before arriving at the coast and that's where I walk the dog every day.

It's usually quite quiet, a handful of cars pass by and I dutifully move onto the verge to let them pass, and often I wave and they wave back. One car I see regularly is the postman's. We always smile and wave when we see each other. This exchange seems to mean a whole lot more at the moment. It's like, I don't know, we're still trucking and we'll keep on doing so through this whole thing.