Meanwhile, Down at the Oasis... 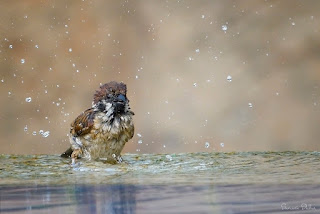 I found a pack of wild bird seed in the cupboard, round the back of where the firelighters live, and I took it out in the back yard and I spread a little bit of it about on the paving like I occasionally used to do when I first brought it back from Tesco.

There it is. That’s as long a sentence as you’re ever going to get out of me. Treasure it.

I was initially a bit worried about this ‘bird seed on the paving’ thing because, as regular readers will know (Hi Jim) we have a bunch of cats who regularly patrol the area.

The last thing I needed was a bloodbath out there.

I needn’t have worried so much. The pussies are too well fed by the entire neighbourhood to bother with anything as meagre as the little thrushes that flicker through and the birds keep a constant nervy eye on the periphery, just in case the cats should ever deign to change their mind.

That small scattering of seed out the back has become a key focal point of my lockdown experience. Three times a day, I tote my sorely depleted seed bag outside and spread a little around. The birds that come are not rare or outlandish. In fact, they could be seen as rather ordinary folk. But they are still spectacular in their own way. This is far easier to appreciate when you find you have a little time on your hands. The genius engineering of even the humblest bird shines through. You only have to look.

I found an old saucepan while rooting down the back of the gas storage tank. Two handled, symmetrical, iron, rusting. I hauled it out and let it air and dry out a bit, then I filled it with water and put it beside the place where the scattered bird seed goes. I thought the birds might like to have a drink with their seeds. From my vantage point at the kitchen window, this water pot reflected the blue sky and created the closest thing to an infinity pool I will ever have in my back garden. The effect is only good when the water is topped right up to the brim (I let a little overflow to achieve the perfect level) so I do that three times a day too, when I’m doing the seed.

I had hoped that the birds might have a drink and they do. They took to the old pot almost immediately, sitting on the rusty rim, claws dipped in the water. They plunge their heads through the surface tension then raise their beaks to the sky to let the water slip down their throats.

My next hope was that the birds might take a bath in the saucepan. This didn’t materialise. Perhaps the water was too deep for comfort, particularly with those cats potentially lurking about somewhere. This was a bit of a disappointment but I found a way around it. Some of the larger flowerpots around the place have terracotta plate-like bases to hold a little water. I imagine they have a name all of their own but I’m damned if I know what it is. I borrowed one of these shallow dishes and set it on the other side of the seed-scattering-site. Then I filled it with water to just beyond overflowing – a second infinity pool.

The first bird who took a bath in it was like the best movie premiere ever.

I had been chatting with Patricia at the kitchen sink when the flurry assailed my own peripheral vision. A tiny bird was in the water in the flowerpot plate, fluttering and dunking away. Then, quite-amazingly, perhaps unsatisfied with the quality of the wash, he flitted over to the deeper saucepan, dunked in there and had a ruddy good rinse.

I have my regulars now. They peck at the seeds maniacally, always with the weather eye to the bushes and to the skies. Scattering into the air when they feel they need to, coming back soon after.

I got a new bag of wild bird seed as part of my big shop this week.

I didn’t go specially to get it because it’s not essential.

Except, in some silly little way, it now is.

Watching birds has become a tremendous pleasure during lockdown. I'm quite fortunate because where we live there lots of quite rural areas within easy walking distance, so we can see ducks and swans and sheep and rivers and fields most days. Last week I ended up helping a young lady to shepherd a duck and her clutch of ducklings out from the edge of the town centre, where they had somehow ended up, over a railway bridge and down into a park next to the canal – we had to stop the traffic while she guided them across the road!

We get all sorts of birds in the back field, I'll not bore you with that, but the ones that charm us the most are invariably the little tinkers who routinely visit our feeders. Through the year, the variety of species changes; you could almost set your watch by it.

Last year I bought my wife a T-shirt which reads “THE WORLD’S OKAYEST BIRD WATCHER” which, ironically, she can’t wear whilst birding because the great big white lettering reflects in the glass and ruins her photos. When she’s photographing her birds (and occasionally squirrels and (increasingly these days) deer) she turns it back to front and then dons her black cap and black gloves. Only a matter of time I suppose before she starts applying blackface. About a year ago she informed me she was interested in birds. I assume she’d told me this before and so went along with it. She tells me loads of things. Loads. And loads to the power loads. They don’t always register. Anyway the next thing I knew she was buying sackfuls of seeds and mealworms and Christ knows what else to satisfy her burgeoning Breakfast Club and (occasionally) encouraging me out the house at the crack of dawn to remove some offending object that was spoiling her shots. The things we do for love. The thing is the wee buggers—and the not-so-wee buggers—learn quickly and these days before it’s even officially dawn let alone daybreak you can see and hear them gathering outside our window waiting to be fed. And, once or twice, a pigeon has even tapped on the window to gee her up.

As far as bathing goes we did buy a bath for Birdie but he never used it. A stand with a sucker on it worked well and he and I took several showers together until he discovered the mirrors on the shelf over the sink and now he’s only interested in singering to them and sod getting clean. Every now and then, especially if it’s very hot, I’ll fill a spray bottle and skoosh him for a bit. And if he’s enjoying it, which he generally does, he’ll do wings so I can get his oaksters done. What does surprise me is how little water he actually drinks. Sometimes in the mornings after changing his water I’ll lift it up so he can have a sip and nine times out of ten he’ll turn his nose up at it and that’s after spending a good eight hours in his cage. Strange bird.

Lots of lovely detail here to enjoy. Particularly like the pigeon who wakes you up to get fed and showering with Birdie. :)

I feel tremendously guilty because I fully intended to comment on this when you posted it. It didn't come up on my facebook feed once again but after Jim told me about his mention of my habits I fully intended to. I did read it then and wanted to rejoice with you on how exciting that first interaction was and to wish you well. I wanted to tell you to throw some rocks or something into your deep pot like steps up a side so that if any critter fell in they could climb out. But something distracted me and the carefully crafted reply I would come back later to post never happened. I recently checked the settings on facebook and made sure your posts were selected to show up on my feed. The new facebook interface is horrible and I seem to be leaving after seconds these days. Today, however, your smile post showed up in the first couple of posts and I delighted in reading it. Then I came looking for this post to respond to instead (so as not to end the sentence with a preposition twice in one post).

Hi Carrie. This is a guilt free zone. :) Rejoice is the right word for my bird feeding experiences, which have seen me all through the summer. No harm has come to any of the birds, via deep water or cats so that's good too. Thank you for reading.

Facebook seems to want to build us little rooms to live in rather than showing us what we would like to see. It's a conundrum for sure. x