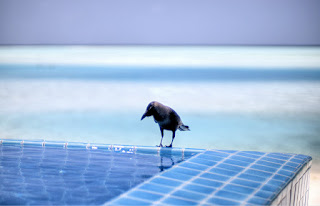 Time moves faster, the older you get.

They didn’t tell me that, when I was young. Sure, they alluded to the fact that a long life can seem to go by in the blink of an eye. They just didn’t cover the speeding up part.

I mean, come on, it’s March already. It was Christmas yesterday and last Summer was just the day before. Tomorrow is Easter and 2020 is close behind. This isn’t going to end well, is it?

It’s seven years this week since Dad died. How can that be right? It seems like…okay let’s not go overboard but it does seem more like four years than seven.

I figured it would be nice to write a new post about Dad. Some memories and stuff like that. I’ve been thinking about it now for a couple of days. It’s evoked a strange feeling in me. It’s kind of hard to describe but let me try.

When I was little, I somehow ended up out of my depth in a swimming pool. I wasn’t happy out of my depth because I couldn’t swim. But the edge of the pool was right there, just out of my reach. So I started kicking and splashing to get myself to that edge of the pool. I kicked and splashed and eventually I got there and clung on and climbed out and I don’t think anyone even noticed that it had ever been a thing.

The thing I remember though, about that, is not the relief of reaching the edge of the pool. It’s the eternity of time I spent before I got there. Kicking and splashing, getting nowhere, floundering.

When I started thinking about a new post to write about Dad, I started to get that feeling again. That the edge was right there in front of me but I couldn’t get to it, no matter how hard I kicked.

The edge, in this case, was my memories. My memories of Dad. They are right there, I can sort of see them through the melee and the stinging pool-water in my eyes. But I can’t grab them.

I thought it would be a breeze. Write something new? Easy. Dip in to the old memory banks, pull out a juicy titbit, write its ass down.

Not so, as it turns out.

Granted, I have written posts about Dad before and covered lots of stuff in there. But there’s more. There’s lots more. Acres more. He was always there. We were especially good mates in the years between Mum dying and him dying. Loads of things happened. Loads of moments. Loads of memories…

And those memories remain like the edge of a swimming pool that I am reaching for and can’t quite get to.

I think I thought that starting to write this post would give me the impetus to get to the edge of the pool and haul myself out onto some rough tiled floor of memory. So far, though, it’s not working.

Oh, I could tell you about that time we went out to lunch in Strandhill and… or the time we watched The Shining on telly together and… or that other time when… Not all of my memories are out of reach. Many are right there, I have them. But those ones, well… To continue the pool metaphor, none of those memories seems to provide a sufficient grip, a sufficient hand-hold to haul myself out of the fix I am in. They’re not ‘substantial’ enough.

But, now that I think about it, it suppose that’s the thing, isn’t it?

I’m trying to find a memory that will sum it all up in a neat eight hundred words. Me and Him. Him and Me. And of course such a memory never existed. The whole thing was a mosaic of tiny moments and interactions. There was never one all-consuming moment that told the entire tale.

It’s just the small memories that matter, isn’t it?

I really didn’t know that when I started typing.

But I got there in the end.

There was that time we went for dinner and Dad was trying out some new pill which was obviously messing with his metabolism such that he was hugely and unstoppably charming and flirtatious with all the female waiting staff. I had to go around after him apologising profusely. He was 78 at the time.

Or that late evening when I dropped in to visit and we ended up watching the Shining together and it was coming to the Room 234 scene and I said to him, “Dad this is good film but that lady is about to climb out of that bath and you know that you don’t want to be sitting here with me when she does that.” So we turned over to the football.

Or that time we went together for your endoscopy and all the grown men before you were coming out shaken and teary-eyed and you came out, same as ever, quietly reporting it wasn’t terribly nice.

Seven years on and I’ve still got you in here, Dad. No worries. My memories may not be huge or earth-shattering but, whenever I bunch them all up together, I’ll easily have enough to haul myself up onto the edge.

Lovely post, Ken. I also have some lovely memories of your Mum and Dad in years gone by. 💕

I struggle with posts like this on a couple of levels. Firstly, and most obviously, I didn’t know your father. I don’t miss him. I can’t share your loss, not on that level. Secondly, I should at least be able to empathise with you because I have lost a dad but not all losses are equal. It’s some twenty years since he died. I forget the date. Hell, I’m not even sure which year it was but if I needed to I could find my old wallet where I kept the train ticket. I have the train ticket from the day Mum died too. And their death certificates are lying around somewhere.

I would’ve hoped you would’ve had a copy of Left by now but I’m still waiting on my second beta reader getting back to me. Among other things it’s my response to my inability to deal with the loss of my parents in… let’s just go with a “conventional” way. In the book I write:

There are no rules to grief. Some say there are, rules, steps, stages, five or maybe seven, like a programme. I wondered if I might get a certificate when I was done to bring home and show the flat. Look, flat, what I did. Aren’t I a good girl? Christ, I sound like Shirley Valentine.
How do you know you’re doing it properly? I imagined people in the street, strangers elbowing each other, and sniggering or tutting as I passed:
“Look Mabel, there’s that woman who doesn’t know how to mourn right.”
“Oh, yeees. Sorry-looking thing, isn’t she?”
“Do you think we should go over and talk to her?”
“God, no. It might be catching.”
I wonder how many stages there are to the other emotions. You never hear anyone talking about the four phases to love or the three degrees of joy. Did you know there are supposedly forty-eight different emotions? I looked it up once. Forty-frickin’-eight!

Do I miss my parents? Yes, I can honestly say that. But our relationship was complicated. There was a lot of disappointment going round. I think duty held us together more than love and that’s not a bad thing. It makes it hard for me to say, “I know what you’re going through,” because I really don’t.

Of course as soon as you start recalling things I find myself, as I do, looking for comparable memories. I remember my dad taking us to the baths on Saturdays although I didn’t actually learn to swim until I was about thirteen and only ever mastered (I use the term loosely) the breast stroke. He never had to endure an endoscopy but he did have to undergo exploratory surgery on his stomach and then there were the heart attacks, the one that didn’t kill him and the one that did. He was also a flirt which would’ve been fine he hadn’t objected so to my mother flirting. I doubt he ever saw or would’ve wanted to see The Shining but I do remember him getting het up watching the wrestling on a Saturday afternoon. God, he hated Mick McManus. He would’ve been gutted to learn the matches were all staged—gutted.

Yes, I’d have said it’s around four years, never seven. Last time I met your dad was with you at your play in Castlebar about 8 years ago, no maybe it was 10, or 11. He was in great form and really enjoying evening, clearly very proud. Think you and him headed off to some nightclub afterwards, not sure, we had to give it a miss to get back to Sligo.

Similarly, the years between mum passing and dad, whilst I felt we were always close, in that time we got closer.

Thanks for your story
And lots more.