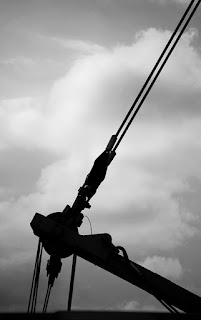 I’ve been walking around the town doing a kind of a Hitler salute and people have been looking at me funny so I thought I’d better explain.

It’s a stretching exercise. I seem to have somehow damaged some tendons in both my arms at the same time and this stretching thing seems to help. I extend my arm, waist high, and raise my palm backwards as far as it will semi-comfortably go. Man, you feel that action in your tendons, trust me on that.

I’ve had this thing since roughly early December. I looked it all up on the Internet, as you do, and the general consensus is that stuff like this can take about six months to heal. So here I am, working my tendons and pissing off all those good townspeople who haven’t read this yet.

Okay, I don’t, it’s a literary device, deal with it.

Our clothes line broke. It’s one of those twirly-round helicopter type ones, you know what I mean, and perhaps it didn’t so much break as wear out. They do that, you know, those twirly-round helicopter type clothes lines. So, anyway, I bought a new one and I started into putting it up. And, for better or worse, I started to put it up like you would put up an umbrella. Except, of course, it was one fucking enormous umbrella. When the ‘Umbrella Technique’ failed to have the desired result, I resorted to going at the thing from the other side, stretching the arms of the line out and out in the hope that they might click into place.

So here I am, with constantly painful and aching arms, moaning occasionally and grimacing a lot, doing my little Hitler exercises all around the town (Autocorrect keeps capitalising Hitler (see) which is annoying me a bit. Grammar or not, I don’t want to afford the prick that amount of respect). It’s not all that painful. A minor thing, really, and I’ll be okay. So don’t be worrying about me. Stupid tendons, stupid helicopter clothes line.

Tendons, though. They are sore. They’re sore now, as I’m typing this. They’ll be sore later and they’ll sure as shit be sore tomorrow. It’s made me think. Everything makes me think. It’s quite tiring, really. All that thinking.

It made me think that you can’t ever really have empathy.

I always like to think that I have a lot of empathy. It’s one of the very few things that I actually clap myself on the back about, from time to time. I like to think I can feel some of what you feel, experience things from your point of view.

But these overstretched old tendons of mine have told me otherwise.

For two months, a little more, I have been in some pain. Not a lot but some and almost constantly. It’s been a persistent presence in my days… and nights. It’s told me lots of things. It’s told me I’m getting older, that injury is easier to do, that recovery times are longer. More importantly, it’s told me that I’ve never felt this for anybody else. I may be a great empathetic person, here in my head, but I’ve never felt pain when somebody else has told me they were feeling it. Now that’s it’s here with me, at least for a while, I know that nobody is sharing it with me and, when it goes, as I hope it does, I won’t be sharing anyone else’s. Our pain is our own to bear.

It’s a pity. What a talent it would be to be able to take a percentage of someone’s pain for a little while. We could all chip in and give some poor person a week away from their burden. Fourteen of us, half a day each. We would be doing good and we would be getting a solid dose of real empathy. We would know how that person lives.

I also think we would live in a far better world, if we could feel a little of each other’s pain. We would be kinder to our ill and our elderly and our disabled. We would take care of them better.

I think I might stop typing now. My tendons are a bit sore.

But you probably don’t.

I seem to have missed this one. Lucky I checked. Anyway, tendons. Yeah, been there. Am there. Never really found anything that works bar rest and like that's going to happen. I have a selection of wrist supports that help a bit when it's really bad and I take pills but they don't seem to do much. I just accept it as a writer's lot. That and the neck and backache which is pretty much a constant these days too. I bought a stool for my keyboard but it has no back support and I'm regretting that. As a kid I'd sit at the organ for hours on end but I really can't manage that now.

You're right though, we really don't know what anyone else is putting up with on a daily basis. For me pain is a constant and, yes, technically it is pain but that sounds a bit oh-woe-is-me. It's discomfort. That's what it is. Although my wife might disagree (she sees me as a bit of a delicate flower) I actually have a fairly high tolerance for pain. I think. I don't really know. Are your tendons sorer than mine? Is it a competition? What do I get if I win?

Ah, what a great joy it would be to band together and take away someone's pain. I am reminded of the Star Trek episode in the third series called The Empath which stuck with me at the time. It seemed almost as if one could actually do that if the will was strong enough. In looking up the episode, I noticed that it was banned by the BBC at the time because of disturbing content (torture, apparently, not empathy). There were 3 other episodes from that season that were also banned, though all eventually shown in the 1994 run.

As a teen I listened to a radio show in which listeners who were not feeling well were encouraged to put their hands on the set while one of the assistants intoned the healing words, 'poor baby' -- later as a mother I used those magic words many times. I do think pain can be lessened to some degree by honest empathy. As far as Jim's fairly high tolerance for pain I reserve comment. The 'poor baby effect' doesn't work on him. His theory is that all pain should be rubbed, preferably by someone else.

We do reach a point in life where chronic pain becomes the norm and you just have to suck it up and endure to some degree. Acute pain, such as that described in your post often just needs a little rest and some appropriate intervention (ice, heat, various chemicals) but a well placed 'Poor baby' never hurts. Hope you are feeling better by now. :)