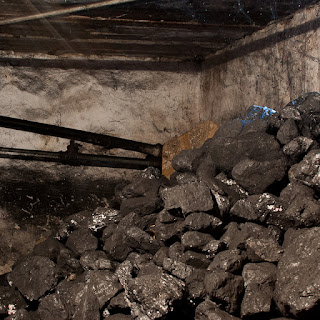 It may still surprise some people to hear that many things in this world are alive and sentient.

Awareness is not just reserved for things that move and breathe nor for plants that seek the sun and open up gently with the coming of each dawn.

Mountains are alive. Lakes and forests think and feel, though often in much slower and more deliberate ways than we tend to do.

The coal seam, a mile and a quarter below the surface of the earth, was itself a single huge sentient being. Enormous and unimaginably slow, it lived and reacted to the world around it and understood every tiny thing that it did.

The coal seam held something fundamental in common with most of the enormous intelligences that move through this world. It donated a piece of itself to every little part that was ever chipped away from it. Every tiny piece of coal became a slow existence all of its own.

So it was with Rocky.

Rocky was a small piece of coal. Blacker than black and shiny bright beneath his dust. But you know what coal looks like. Imagine coal. Rocky was a piece of that.

He was hacked away from his parent and that hurt like hell and then ached and then faded. Although he missed the whole, he soon came to embrace the displacement and the occasional transportation and the lying-in different places and the proximity to different fellow pieces of coal.

(Of course his name was not Rocky, that would be ridiculous, he had an identifier with which he set himself apart but that actual ‘name’ was derived from the name of the whole and would take so long to say that we would still be here at the turn of the century. So let’s not.)

Life away from the coal face was a roller coaster to Rocky. By his measure, things happened with such dizzying haste. He loved the cacophony, the kaleidoscope, the vivacity of his existence.

Until the coal bucket.

Rocky was rushed away from the whole to a processing plant, through a distribution centre, a bag, a truck, a bunker and finally a bucket, all with mind numbing haste. The entire process took about three years which, to Rocky, was a virtual blink of an eye.

The was a buzz in the bucket. Not a buzz by our standards but a buzz nonetheless. There was a sense that the very purpose of existence was near at hand. This was heightened by the inconceivable rate of turnover of personnel within the bucket. Pieces of coal came and went with alarming velocity. It was hard to keep track. More entrancing still was the demeanour of the coals as they left the bucket. There was a palpable sense of being ‘taken up’, of ‘going home’. It almost radiated from those who left. A sense of fulfilment, long awaited.

But Rocky was at the very bottom of the bucket. He was the first piece of coal ever to be shovelled into the bucket and it seemed that it was his destiny never to come back out again. The shovel would come in and raise his comrades to their glory and it would often come to a place where there was only Rocky and one or two others left, there in the bottom. At those times, his anticipation, such as it was, was huge. His time had come, he was next. But then the bucket would get refilled with more and more comrades and he would once again be right at the back of the line. The line that never ended.

You would think that Rocky would have the patience for this wait but it wasn’t like that at all. Perhaps it was the proximity to his fate, his nearness to his defining moment. Perhaps it was just so long in coming. Whatever it was, the bottom of the coal bucket quickly became hell for Rocky. Every time he thought his time had come, more of his comrades were dropped in and back he went to waiting.

Eventually, Rocky could take it no more and he started to move upward through the bucket. This might sound like the most ludicrous thing you ever heard but it can and does happen. Take a field and clear it of rocks. More rocks will come up. Things can move. It takes time and it is not at all easy but, over time, much time, things can indeed move.

Rocky willed himself upward. His progress was dependent on the movement of his comrades within the container as they first came and then went. It was hard. To his comrades, he became a legend. The lost one at the end of the line, who could stand it no more. To some, he was a threat. Somebody would have to take his place at the bottom if he was not there and nobody wanted that. There were disputes and blockings and friction and slow fights. But Rocky progressed. He moved from the bottom to second from the bottom.

One day, the shovel came deep in for its last load before refilling and Rocky was on it. He nearly wasn’t. He nearly slipped off but he held on and held on.

The shovel lifted him and swung him and he knew this was it. This was his destiny. The centuries of pressure and waiting and dark had been for this.

The shovel jerked and he flew. With his comrades he flew.

And you know the rest.

Wonderful. Write one thing and say something else. That’s the essence of poetry even when it’s disguised as prose. Reminded me of that wonderful line from Blade Runner: “The light that burns twice as bright burns half as long—and you have burned so very, very brightly, Roy.” Love the way you got me empathising with (and eventually rooting for) a lump of coal. Have you ever read any Tom Robbins? Carrie’s read everything he’s ever written. He often enlivens inanimate objects in his books. Can o' Beans, Dirty Sock, Spoon, Painted Stick and Conch Shell all have key roles in his novel Skinny Legs and All.

Thank you, Jim. I'm grateful for a bit of encouragement today and you provided it.
I like Tom Robbins very much. I was given Still Life with Woodpecker in the 80's and found it both hilarious and empowering - here was a writer who seemed able to make anything happen. I subsequently read Jitterbug Perfume and must now go back for some more.

Really enjoyed today's piece from your pen Ken. Made me think. I have, heretofore, been guilty of interfering with that equilibrium for reasons unknown even to myself! It's turf in my case and it's completely alive and always moving in the bucket.
I have often watched that bottom poor sod closely and, because my perspective differed in the past from yours regarding the 'final glory' my interventions were more reprieves in nature and I had cast myself as chief executioner but .. with a little heart! I will, from now, regard the
little sod as you do your lump of coal and deliberately lift it to it's ultimate purpose. Thank you. ����

That's lovely, Audrey. Thank you. Just to throw the cat among the pigeons a bit, I would confess that my perspective on the 'final glory' would be pretty much the same as your own so I wouldn't mind if you kept that little sod safe for another while. :)

Done! Always intended to anyway if truth be told! Hard to break the habit of a lifetime. In the meantime we'll keep those home fires burning. 😊😊

Rocky was a small piece of coal. Blacker than black and shiny bright beneath his dust. But you know what coal looks like. Imagine coal. Rocky was a piece of that.
That paragraph killed me, laughing so much.
As for 'you know the rest', how else do you end a short story... except have you.
Lovely stuff as always Ken.